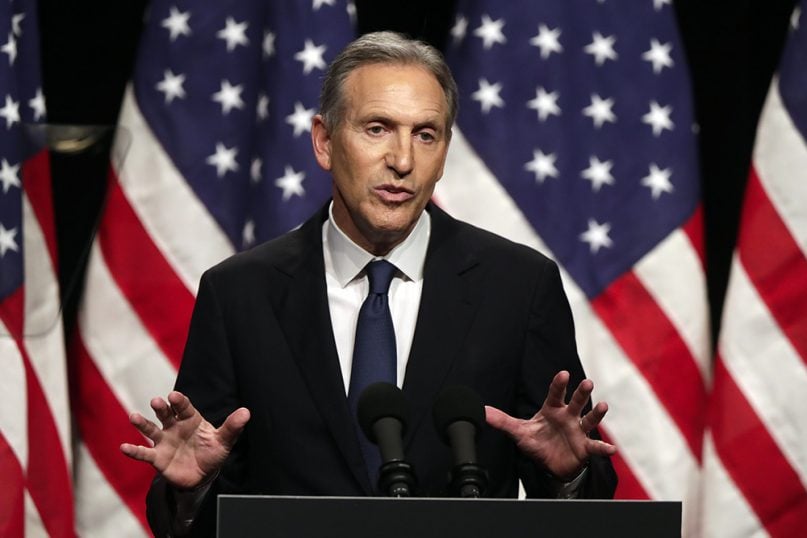 (RNS) — Howard Schultz, the former CEO of Starbucks, is so far having about as hard a 2019 as a billionaire could have.

Okay, he has a bestselling book and his suggestion that he might run for president as an independent made a huge splash when he made the rounds of the cable chat shows last month. But his media fizz has enraged Democrats who believe a Schultz campaign could single-handedly guarantee President Trump another four-year lease at 1600 Pennsylvania Avenue.

Political strategists like me, meanwhile, believe Schultz is being swindled by our colleagues who are billing him handsomely to help shape his presidential vanity project.

I’m tempted to join the pile-on: Everything we “know” about politics says Mr. Shultz’s Independent campaign is destined for failure.

But I believe Schultz may have a constructive role to play in 2020. Conventional wisdom says the following advice is worth less than a $4 cup of coffee, and so I offer it free of charge.

More crucially, nationally, voters who lean left socially and right economically comprise less than 5 percent of voters. Instead of chasing these select few, any independent who wants to peel voters from the major parties in decent numbers should focus on voters who are economically progressive and socially conservative. They comprise nearly 30 percent of the electorate. That’s a very strong base to start from.

What’s more, they are available for the peeling. The most distinctive feature of this group politically is that they are taken for granted by both parties. The Democratic Party looks on these voters’ convictions on abortion, marriage, and religious freedom with utter disdain. Republican candidates appeal to them but, once in office, actively pursue policies that disadvantage all but the very richest among them.

There is one caveat. This group likely contains a disproportionate share of both religious voters and non-white voters. To peel them from their accustomed voting habits, Schultz would need to modify or at least clarify his positions, especially on abortion, taxes, and religious liberty.

Schultz does not have to feign religiosity himself, although it would be an asset if he could speak the language of faith sincerely. Nor would Schultz have to run on an explicitly Christian Democrat platform like the Catholic Church teaches or the American Solidarity Party espouses. He simply needs to recognize that there is a grande — no, venti — pathway right up the middle of American politics.

In other words, he has to advocate for policies that a large group of politically disaffected Americans actually supports.

Schultz already has the makings of a compelling appeal. Thanks to his vast fortune, Mr. Schultz has a great selling point in his ability to stand above the corrupt two-party duopoly. He should advocate for reforms the parties tend to ignore or actively resist. Just as President Trump did, Schultz can campaign against a system that is profoundly broken, a proven method of luring these politically disaffected voters.

But at some point, any candidate for office has to run on an ideology, or issue positions, and this is where independents struggle. Eschewing platforms, independents love to say, “I’ll do what’s right for America.” But voters aren’t fools: They rightly want to know what a candidate believes.

On abortion, Schultz could say what huge a majority of Americans have long believed: This is a fraught issue, and the only realistic compromise is for the procedure to be available in the first trimester before fetal brainwaves are measurable but limited thereafter, when Americans widely believe abortion to be more morally problematic.

Schultz could then move on to critiquing both parties’ flawed conceptions of religious liberty. Republicans are better at protecting believers against encroachment from the state but have shamelessly backed Trump’s Muslim travel ban. They are also keen to defend questionable free exercise claims, especially when made by white Christians.

Schultz could be the only candidate to say that the state, to the greatest extent possible, should never compel individuals against their consciences — and actually mean it.

Religious voters would rally to economic populism as well, if Schultz spells it out in greater detail. We know that Trump voters who attend church regularly are likelier than nonreligious Trump voters to be more supportive of minorities and immigration and to be more concerned about poverty.

All Americans would benefit from a movement built around human dignity and meaningful political reform, if only because it would force a needed debate about the sorry state of our politics. Such a movement might just make voting great again.

Running for president is no joke. If he wants to avoid being an object of ridicule, Schultz should first stop chasing voters who don’t exist and instead craft a serious, substantive plan to connect with the millions of voters who are disaffected with both parties. 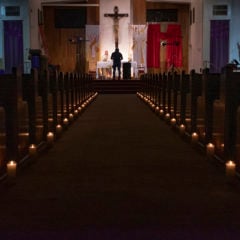