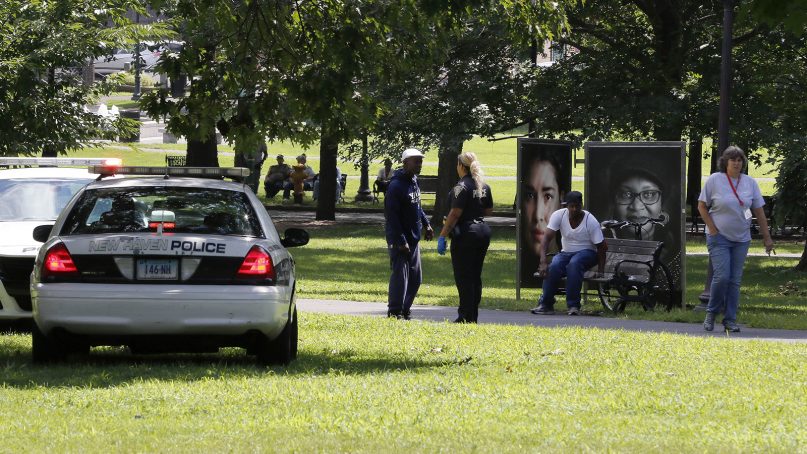 A police officer speaks to people on New Haven Green on Aug. 15, 2018, in New Haven, Conn. Emergency personnel responded to dozens of overdoses at the park on Aug. 12, 2018. (AP Photo/Bill Sikes)

Her 29-year-old daughter was in intensive care at a nearby hospital, unconscious and bleeding internally, symptoms that doctors said were connected to years of being addicted to opiates, heroin, cocaine and crack.

Her daughter might need surgery, Abubakar said as she sat down, adding that she might have to leave at a moment’s notice.

“As those children come to you and you go through life, as parents, we realize we can’t fix everything,” Abubakar said. “As a parent, we think all we gotta do is the same thing our parents did, and it will be OK.”

But with her eldest daughter, Abubakar said, more intervention was needed.

This has been her life over the past decade and a half.

Abubakar said her daughter’s journey into drug abuse began in eighth grade, when she started smoking marijuana on the streets with her friends. From there, she began using harder drugs, her mom said.

“She tried to go to a Florida rehab. They even paid for it,” Abubakar said. “But she was still holding on to this attitude of ‘I don’t really need help, I can stop this. This is what I choose to do.’”

But her daughter’s fragile frame started to buckle under the weight of the substances she was taking, and she regularly fainted and fell. Abubakar took her to the hospital in January after one fainting incident, and the doctors kept her daughter for 15 days, treating her for anemia and internal bleeding.

Abubakar was thankful for her daughter’s hospitalization because it kept her away from the streets and the drugs. But after she was released, her daughter fainted again on Feb. 4, went into cardiac arrest on the floor of Abubakar’s bathroom and had to be rushed back to the hospital.

Addiction stories like Abubaker’s are rapidly becoming more common in Connecticut, a state the National Institute on Drug Abuse counts among the top 10 states with the highest rates of opioid-related deaths. According to the agency, the state has seen a nearly fourfold increase in deaths from opioid overdoses since 2016.

In a 2017 anti-opioid campaign, the U.S. attorney’s office for the District of Connecticut said there were 446 deaths from fentanyl overdoses in 2015, up 3,000 percent from 2012. On Aug. 15, 2018, New Haven ambulances responded to more than 70 overdoses in one city park, the New Haven Green near Yale University, stemming from the abuse of a tainted batch of synthetic marijuana called K2 and other drugs. 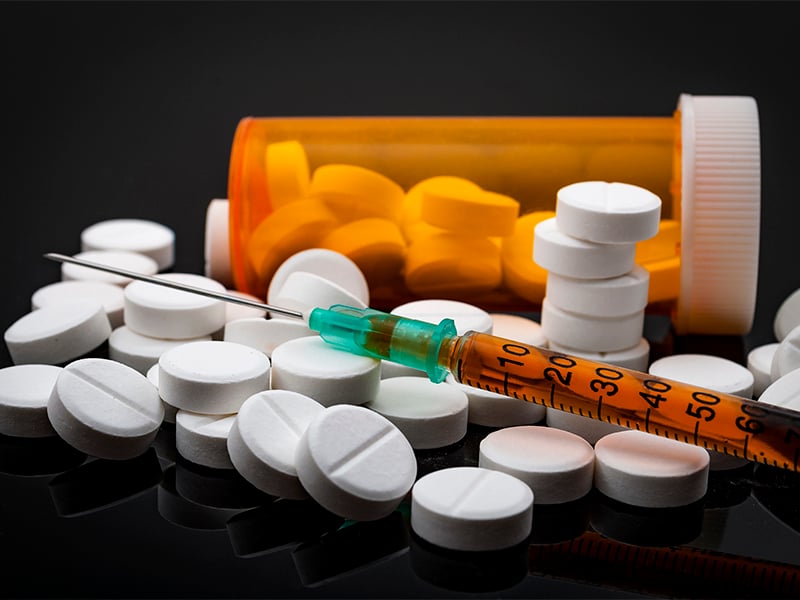 The crisis has left churches scrambling to respond.

Last year, a man overdosed on the front porch of The Center Church, a First Church of Christ in Hartford. The police were called, but church officials never learned what subsequently happened to him, said the Rev. Shelly Stackhouse, the church’s transitional pastor.

The incident made Stackhouse aware that the church, which already hosts weekly free community meals and runs an outreach center, needed guidance on how to respond to the opioid epidemic, especially how to minister to those with addictions.

Stackhouse pursued training through Faith in Harm Reduction, a program offered by the Harm Reduction Coalition, a New York organization that educates faith leaders on how to deal with drug abuse in their communities. She is also pursuing training in how to administer Narcan, a drug that’s used to treat overdose victims.

“Both our outreach director and I will be trained to use Narcan in the near future, and we will keep some on-site,” she said.

The Rev. Erica Poellot, the coalition’s director of Faith and Community Partnerships, is seeing more faith leaders of all denominations across the country reaching out. She said the faith community needs to change the conversation about drug abuse, replacing stigma with compassion.

As the pastor of Maranatha Life Changing Ministries Church of God in Christ, Roger Wilkins said he hopes more ministries in New Haven and across Connecticut will get involved in helping drug abusers in their communities.

Families in his neighborhood, he said, are “spending their money on all these other things instead of the basics, so we are also feeding people and providing food for homes that need it,” he said.

In Bridgeport, Pivot Ministries has seen a sharp increase in the need for its faith-based men’s residential treatment program.

“I have witnessed the drug use demographic shift from predominantly cocaine use four or five years ago to predominantly opiate use via pills and heroin,” said the Rev. Richard Williams, executive director. “The local Bridgeport faith community is alert to the drug epidemic and makes referrals for those who are in need of help and treatment services.”

Pivot also partners with 47 churches throughout Connecticut and New England, according to its website.

After her daughter’s troubles began, Abubakar became a facilitator for Smart Recovery, a self-management program for people with addictions that also provides recovery training for people and organizations who work with addicted populations. Abubakar wants to get more New Haven churches involved in the program as a resource to help people like her daughter.

Education is the key, she said, but churches can combine information with hope. “They can speak to both sides, giving biblical hope but understanding the specifics of what science says is the problem,” she said.

At the café, a local pastor, Mary Ransome, came over to give Abubakar a hug and to ask about her daughter’s health. Ransome knows what it’s like to have a child who struggles with addictions.

She said her 38-year-old daughter was arrested on a parole violation and placed in a court-ordered rehabilitation program in November 2018, after years of using the drug “Wet,” the street name for a combination of marijuana and PCP.

“She’s got to stay clean for five years. I’m glad because she doesn’t want to go to jail,” Ransome said. “She called me this morning. She’s gaining weight. She said, ‘Mom, I feel healthy.’ This was prayer because God has given her people to look at her and work with her.”

At the restaurant table, Abubakar’s phone lit up with text messages and then phone calls. It was time for her daughter’s surgery. She had to leave.

A few days later, she reported that the surgery had stopped the bleeding in her daughter’s abdomen. “We give God praise,” she texted.

But later that week, her daughter’s health had deteriorated. On Feb. 9, Abubakar texted again: “Saying our last goodbyes. All tests confirmed no brain activity (brain dead.) We thank God for giving hope and time.” 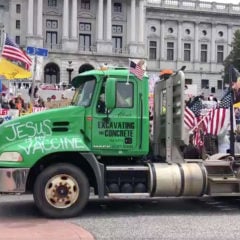 Opinion
The stories we tell about our country and our faith matter
Follow us on Facebook!
Submit your photos to RNS