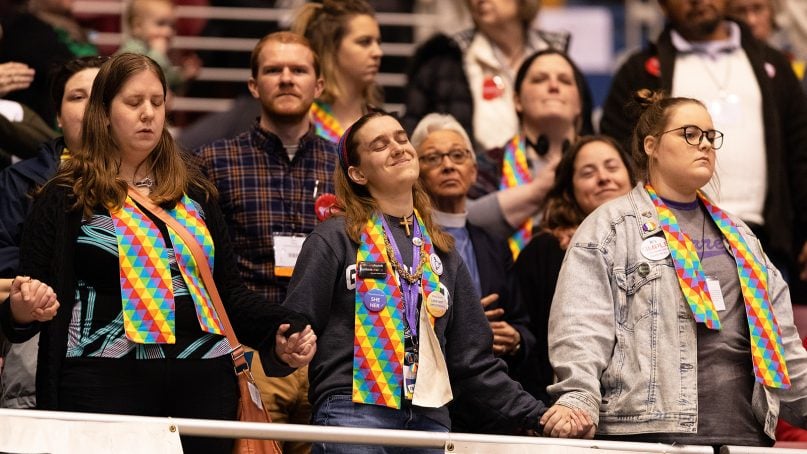 Supporters of full inclusion for LGBTQ persons in UMC life hold hands in the observer’s area at the 2019 United Methodist General Conference in St. Louis, Mo., on Feb. 25, 2019, while waiting for vote totals to be displayed. Photo by Mike DuBose/UMNS

ST. LOUIS (RNS) — In a surprise, the plan recommended by the United Methodist Church’s Council of Bishops was rejected Monday (Feb. 25) by the denomination’s decision-making body.

The so-called One Church Plan did not pass out of General Conference’s Legislative Committee to be considered by delegates Tuesday during the plenary session.

But that doesn’t mean the proposal is dead, according to supporters.

Reconciling Ministries Network, a movement advocating for the full inclusion of LGBTQ people in the church, tweeted after the vote that the rejected plan will “almost certainly still come up” as a minority report on Tuesday.

Neil Alexander — co-convener of Uniting Methodists, a group supporting the One Church Plan — confirmed a minority report including the plan has been filed in opposition to the Traditional Plan.

“We are deeply disappointed about the defeat of the OCP and seeking ways to respond to the deep hurt this action causes many LGBTQ people and all who love (them). And we are committed to find ways to make justice and mercy a centerpiece of all of our ministries,” Alexander said in an email to Religion News Service. “We have much work to do.” 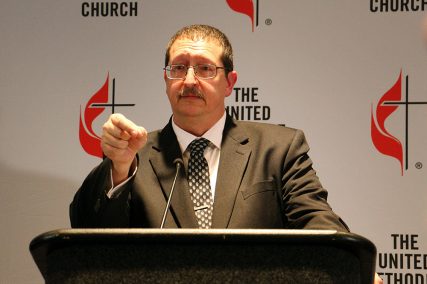 The Rev. Gary Graves, secretary of the General Conference, also confirmed petitions that were not supported by the Legislative Committee could be revived and brought to the floor of the plenary with the support of 20 delegates.

The One Church Plan would allow individual churches and regional annual conferences to decide whether to ordain and marry LGBTQ members. It’s one of three plans presented this week to delegates at the special session of the General Conference dedicated to sexuality.

The Rev. Denise Honeycutt of the Virginia Annual Conference had encouraged delegates to support the plan because she said it allows for churches to hold differing beliefs and “together we are stronger.”

“It does not make any of us choose things that are contrary to our own convictions, but it allows us together to be the body of Christ and joyful, passionate disciples of Jesus,” Honeycutt said.

The delegate said she has pastored large and small churches. She has been a missionary to Nigeria and visited United Methodist churches around the world. She never has been in a church where everybody agreed on everything, she said.

“And yet we were able to be church — to love one another and stay together,” she said.

Meantime, Rudolph Merab, a delegate from the Liberia Annual Conference, spoke against the One Church Plan.

“We keep talking about trying to be united, but, in fact, we continue to talk about being divided,” Merab said. “It is better to be divided by truth than to be united in error.” 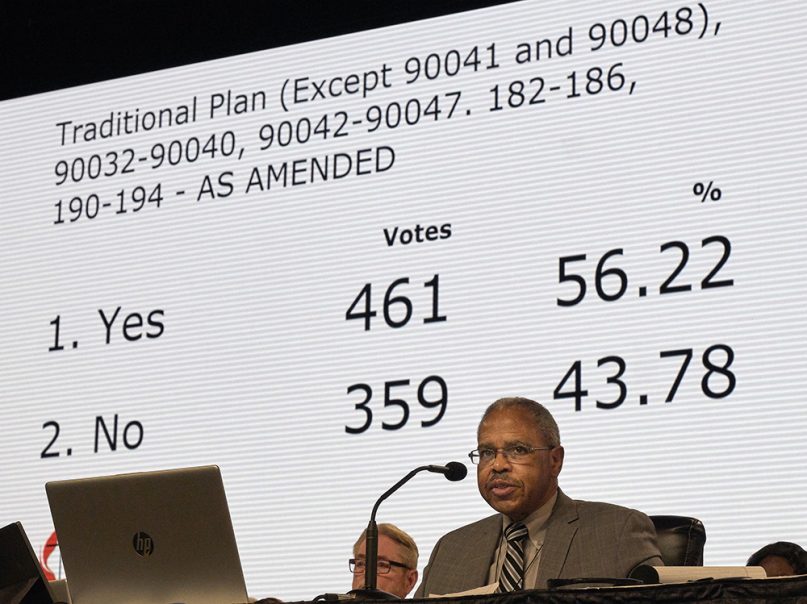 As the Rev. Joe Harris presides, the results of a vote about the so-called Traditional Plan are displayed during a legislative session of the special session of the General Conference of the United Methodist Church, held in St. Louis on Feb. 25, 2019. The plan would strengthen denominational penalties for LGBTQI clergy and for clergy who perform same-sex weddings. Photo by Paul Jeffrey for United Methodist News Service

Earlier in the day, the Legislative Committee, made up of the same 864 General Conference delegates who will vote on the plans during the plenary, approved for a vote another plan, the Traditional Plan.

The Traditional Plan would strengthen the enforcement of language in the denomination’s rulebook stating that “the practice of homosexuality is incompatible with Christian teaching” and that “self-avowed practicing homosexuals” cannot be ordained as ministers, appointed to serve or be married in the church.

Nearly 56 percent of delegates had ranked the Traditional Plan a high priority for the General Conference during the first day of deliberations.

RELATED: United Methodists should acknowledge reality that they are no longer united (COMMENTARY)

Monday’s deliberations ended with discussion of the Simple Plan, which would have removed all language about “the practice of homosexuality” from the Book of Discipline. The Simple Plan was voted down but not before an impassioned speech from J.J. Warren, a reserve delegate from the Upper New York Conference.

Warren spoke about being gay and reaching out to other students at his college with a message about the love of Jesus. “They didn’t know God could love them because their churches said God didn’t,” he said. The Rev. Rebekah Miles, an Arkansas Conference delegate, speaks during the special session of the General Conference of The United Methodist Church, held in St. Louis, Mo., on Feb. 25, 2019. Miles spoke in favor of postponing a discussion of the Traditional Plan, which she opposes. Photo by Paul Jeffrey for United Methodist News Service

He said he wanted the United Methodist Church to be a place where all are welcomed and loved.

“That’s the Methodist church that I love and that I want to be a pastor in one day,” Warren said, amid prolonged cheers and applause from observers supporting the full inclusion of LGBT people.

John Lomperis, a delegate from the Indiana Conference and director of UM Action, a program of the conservative Institute on Religion and Democracy, acknowledged the pain involved in the decisions made this week by the General Conference.

“There’s obviously no joy in the pain of others, whether we agree or disagree,” said Lomperis, who supports the Traditional Plan. He said he also voted to discuss the Simple Plan and hear from its supporters.

The Traditional Plan still faces challenges before it could be adopted. Parts of the plan previously were ruled unconstitutional by the denomination’s top court and would need to be amended. 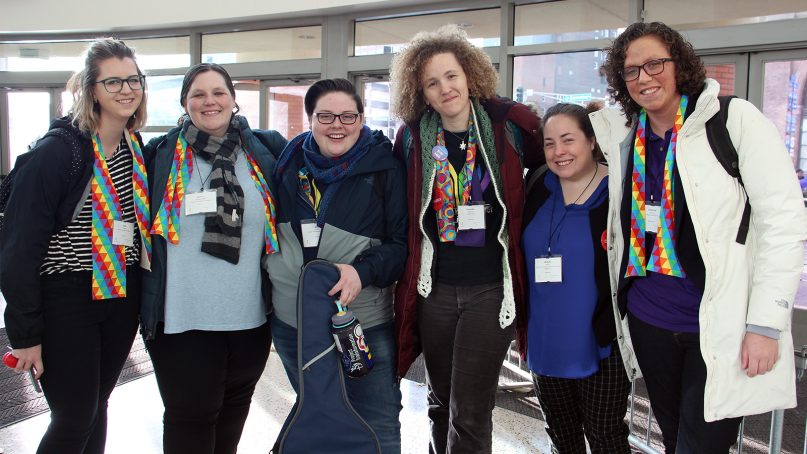 Observers from Wesley Theological Seminary in Washington, D.C., who arrived Tuesday, said they were already grieving the defeat of the One Church Plan and the possibility that the Traditional Plan could be approved.

Cassandra Lawrence said the group had been hoping for “basically anything but” Monday’s results.

Ellie Crain agrees. Crain, who identifies as gay and wants to be ordained in the United Methodist Church, now wonders what the future holds.

“I haven’t even considered walking away. It’s like I’m being pushed away,” Crain said.

Chelsea Spyres, who is straight, said she also wants to be ordained but will not take vows until LGBTQ United Methodists can be ordained, too. The denomination is her home, she said.