PITTSBURGH (RNS) — The delegation from the Department of Justice — two federal attorneys and a social worker — had come to discuss the trial of the man charged with murdering 11 Jews in our synagogue on Oct. 27. They wanted to educate us about our rights, as victims of a crime, to be apprised of the progress of the defendant’s arraignment, trial and sentencing.

Instead, they got a discussion of Jewish concepts of justice.

“Our Bible has many laws about why people should be put to death, it’s true,” my husband said. “But our sages and rabbis decided that after biblical times these deaths mean death at the hands of heaven, not a human court.” Three of our congregants were killed and eight other Jews from two other synagogues were murdered that day also.

The DOJ delegation had been sent to speak with us as a survivor and the relative of a survivor of the horrific hate crime at the Tree of Life synagogue in Squirrel Hill. My husband, Jonathan Perlman, is the rabbi of the New Light congregation, which had been meeting at Tree of Life on Oct. 27 when the shooter arrived. My husband explained the rabbinic idea that those guilty of crimes deserving capital punishment should be put to death, but only by God.

The Talmudic text Sanhedrin 37b discusses the possible ways for these deaths to come about: falling from a roof, being trampled by a wild beast, falling into a fire, being bitten by a serpent, being attacked by brigands, being drowned or being suffocated.

There are of course modern corollaries to these awful and heaven-sent demises. As Sam Shonkoff, a professor of Judaism at Oberlin College, explains: “The rabbis effectively abolish capital punishment, primarily on the grounds that human justice systems are fallible and that executing wrongly convicted individuals is unacceptable. The death penalty should be left in the hands of God, so to speak.”

A Pittsburgh police officer patrols around the Tree of Life Synagogue and a memorial of flowers and Stars of David in Pittsburgh on Oct. 28, 2018, in remembrance of those killed and injured the day before when a shooter opened fire during services at the synagogue. (AP Photo/Gene J. Puskar)

It is overwhelmingly clear that the Oct. 27 shooter is guilty. There are witnesses. There is physical evidence. There are his own written expressions of his desires to commit the crimes. Even people who believe the death penalty is wrong might be excused for thinking an exception should be made for such a heinous case.

But if as religious people we believe that life is sacred, how can we be permitted to take a life, even the life of someone who has committed horrible actions? The third-century compilation of Jewish law, the Mishna, states categorically in Sanhedrin 4:5, “Whoever destroys a soul, it is considered as if he destroyed an entire world.”

RELATED: How a national emergency order endangers the ‘other’

Aside from Jewish teaching, current research points to the fact that the death penalty does more harm than good. Evidence shows it doesn’t help the families of murder victims come to any “closure.” In fact, according to PBS, a 2012 study found that families in one study in Minnesota were able to move on sooner because their loved ones’ killers were sentenced to life without parole rather than having the experience of being retraumatized by having to be a part of the trials in the multiple appeals that often precede an execution.

As one victim quoted in a recent Psychology Today article said, “Healing is a process, not an event.”

Another study, by law professor Lynne Henderson, found that “many crime victims have reported that the endless repetition of their tragic stories, the formal legal rules, and the years and years between appeals only serve to increase stress and delay healing.”

It is also more expensive, according to one nonpartisan organization, for governments to conduct multiple trials and years of appeals for those on death row than it is to lock murderers up for life without parole.

As for deterring crime, Stanford law professor John Donohue argues unequivocably, “there is not the slightest credible statistical evidence that capital punishment reduces the rate of homicide.”

But what about moral justice? 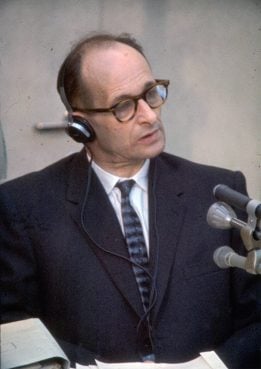 A recent Israeli movie, “The Hangman,” tells the story of the young Yemenite prison guard Shalom Nagar, who was chosen by lottery to kill the infamous Nazi Adolf Eichmann and take his body off the gallows. Nagar has spoken in interviews about the lifelong effects of his role in Eichmann’s death on his life, including nightmares that ruined his sleep. The death penalty increases suffering of those involved in the actual execution and around it.

Make no mistake, I would not have expected Eichmann to repent his unspeakable evil, nor do I expect it of the Oct. 27 shooter. Since there is no way to bring back those they murdered, there is no real way for them to atone for their deeds. There is though the possibility, however slight, a murderer might somehow turn away from evil.

Jews believe it is possible to repent even to the day of one’s death. In a famous Talmudic story, Rabbi Eleazar ben Dordia repented and died and was accepted to the World to Come; the text states, “One may acquire eternal life after many years, another in one hour!”

Derek Black is the subject of a new book, “Rising Out of Hatred,” in which Black, a former white supremacist, recants his beliefs. Arno Michaelis has written both a memoir, “My Life After Hate” and book with a Sikh whose temple in Wisconsin was attacked, “The Gift of Our Wounds: A Sikh and Former White Supremacist Find Forgiveness After Hate.” Neither Black nor Michaelis might have been expected to change their beliefs, and yet they have.

As a Jew, I feel my vengeance for what this shooter has done is to act in ways that counter him.

He wished to destroy Jews and Jewish life; we must act in defiance and strengthen Jewish life. At New Light Congregation, we are teaching people Hebrew who never learned the language before. I am teaching three students to read the haftarah, the prophetic portion of the Hebrew Bible that we read every Sabbath morning. Dan Stein, Mel Wax and Rich Gottfried, all former synagogue presidents, will forever be missed at New Light; they were dependable leaders of the service and haftarah readers.

By training others, not to take their places, but to serve the roles they served, we are avenging their deaths. I also know that Dan, Mel and Rich would prefer to be avenged by knowing there are people filling our synagogue with song and learning and worship.

In a few weeks, Jews around the world will be celebrating a holiday, Purim, which is about the defeat of anti-Semitic evil, the downfall of those who want to destroy us. I plan to avenge the attack on my community by celebrating our lives as Jews.

When the identity of Eichmann’s hangman, Nagar, was released 40 years after the execution, he got a request to be interviewed for German television. Nagar said yes, but insisted that the television crew come to the study hall where he went each day to devote himself to uncovering the meaning of Jewish texts. “I want the German people to know that not only did the Jewish people survive physically and are here in Israel, but also that we are still learning Torah,” Nagar said. “You could not destroy us. I want them to see Jews alive and learning Torah.”

“For the Jewish people live, and the Torah lives, too,” he said.

The most important vengeance for the murder of 11 Jews or 6 million is for the Jewish people to live and the Torah to live, not for their killer to die.