UNIONTOWN, Pa. (RNS) — After a longtime youth minister’s recent conviction on corruption of minors and indecent exposure charges, a judge in this western Pennsylvania community did what the Uniontown Church of Christ’s elders refused to do.

The judge told Clyde E. Brothers Jr. to stay away from church services.

Brothers, 68, served for many years as the volunteer youth minister for the 100-member Uniontown congregation. Since at least the 1980s, he also interacted with hundreds of children as a founding board member for Camp Concern — a Bible camp directed and sponsored by members of Churches of Christ. Generations of parents entrusted Brothers with instilling Christian faith and values in their children in this city of 10,000.

Victims’ relatives say his case points to a problem that plagues not just the Roman Catholic Church and the Southern Baptist Convention — both embroiled in major sex abuse scandals — but also the nation’s 12,000 autonomous Churches of Christ.

“It truly is an epidemic, such sickness,” said one victim’s mother, a former Uniontown church member whose name is being withheld to protect her son’s identity. 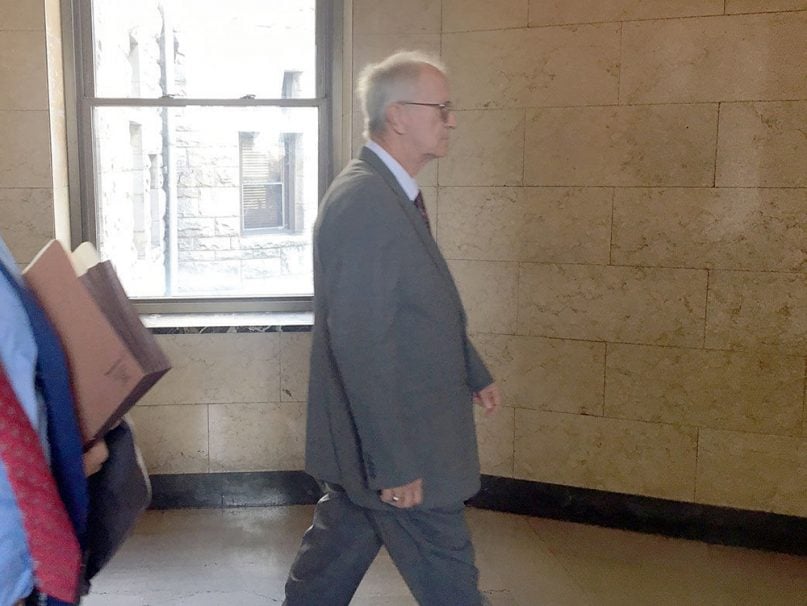 But church leaders’ decision to allow Brothers to keep worshiping with the congregation made it worse, they said.

“I was told I had hatred in my heart, and I needed to forgive,” said member Debbie Williams, a former youth group sponsor who had traveled with Brothers and church teens to numerous Bible bowls and youth rallies.

Another longtime member said her son, now in his 30s, was one of four victims whom Brothers identified by name to the Pennsylvania State Police.

“It’s almost like Clyde is more important than the victims are,” the mother said about the perpetrator remaining in the pews.

Bob Coldren, one of the church’s three elders, stressed in an interview that Brothers twice came forward at church and repented of his sins.

“Just like anybody else who comes forward at church, is it my place to judge him on his sins … or is it God’s to judge him of those?” said Coldren, who is also Brothers’ brother-in-law. “If I judge him if he’s sincere or not sincere, I’m judging wrong because I can’t see what’s in his heart.

“I’m in the middle of a bad situation. No matter what I do, I’m wrong,” Coldren added. “So if I say, ‘Absolutely not, he didn’t repent,’ then God’s going to be on me. I’m not going by the world. I’m going by what’s in Scripture.”

Coldren said the elders had taken steps to protect children and ensure the former youth minister was “never out of anybody’s sight.”

Brothers was removed from his church leadership roles after the allegations surfaced in late 2016.

Asked if the elders supported the victims, Coldren replied, “Yes, we were very supportive of the victims, if they asked for the help. But none of them ever came to us for anything. What do you do when nobody asks? You can’t help somebody who doesn’t ask for help.” 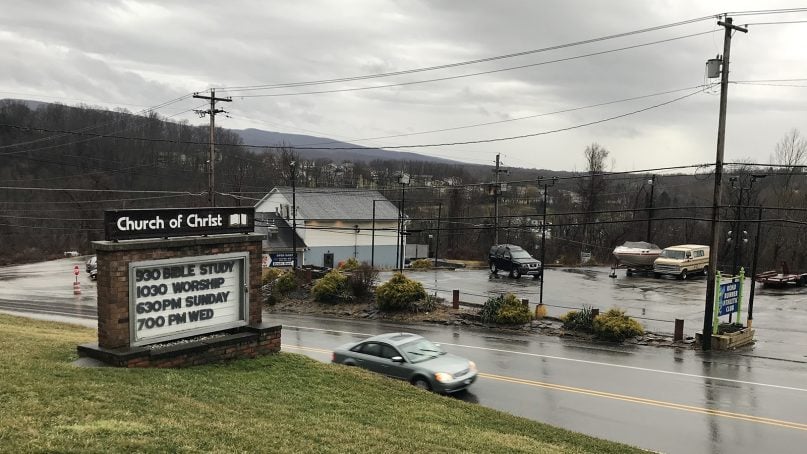 The sign outside the Uniontown Church of Christ in Pennsylvania on a rainy day in February 2019. Photo by Bobby Ross Jr.

More than two years ago, three of Brothers’ fellow board members at Camp Concern — conducted each summer at Raccoon Creek State Park, about 25 miles west of Pittsburgh — confronted Brothers at his home.

Brothers broke down and confessed to inappropriate behavior with “many, many, so many boys,” said Terry Lafferty, one of the board members and minister for the North Hills Church of Christ in Pittsburgh.

“He said, ‘I’m evil, just evil,’” Lafferty said of the December 2016 meeting. “And I thought that he was really going to open up and confess to all this stuff because there were a lot of names that started coming out.”

Brothers agreed to go with Lafferty, Richard Walton and Keith Wolfgong to make a statement at the Pennsylvania State Police station in this city about 50 miles south of Pittsburgh.

By the time Brothers got to the station, though, he had become much less forthcoming, Lafferty said.

Some allegations against Brothers could not be prosecuted because the statute of limitations had expired, victims advocates said. Other claims involved alleged victims who were unwilling to testify.

In at least one case, church members complained that law enforcement officials did not follow up on leads. Fayette County Assistant District Attorney Wendy O’Brien, who prosecuted the corruption of minors and indecent exposure charges filed against Brothers in March 2017, declined an interview request.

At Brothers’ trial in Fayette County District Court last October, a 38-year-old man testified that he was 13 or 14 when the Uniontown youth minister took him to a church event in Arkansas and inappropriately touched him.

At first, Brothers took him and other young people to fun activities, such as seeing movies and driving go-karts. But then the youth minister began showing pornographic movies to the boys, the man testified, according to the Uniontown Herald-Standard. Eventually, Brothers performed lewd acts in front of him and encouraged him to do likewise, the man said, reporting that this happened “at least 50” times.

“This man stole my son’s childhood as well as his innocence and basically ruined his life,” the man’s mother said in a victim impact statement. She alleged that the youth minister drugged and molested her son “on several occasions” and threatened to harm his family if he told anyone.

“I believe that Clyde Brothers deserves nothing less than the most severe punishment allowed by law, of course,” the mother told Judge Steve P. Leskinen before Brothers’ sentencing in January. “But I know in my heart that the more severe punishment will be the one that I pray God delivers to Clyde Brothers because he chose to prey on innocent children in God’s name.”

Another mother directed her victim impact statement to Brothers, who did not speak when offered the opportunity by the judge.

“Not one of your victims remain in church,” the mother told Brothers during the court hearing. “You have affected them in more ways than you could imagine. Were all these activities just so you could gain access to the boys? One is in jail. Some have turned to drugs and have trouble holding down a job. Counseling doesn’t help. And two have committed suicide.

“And all the while,” she added, “you have been walking around a free man while these boys are trying to deal with what you have done to them.” 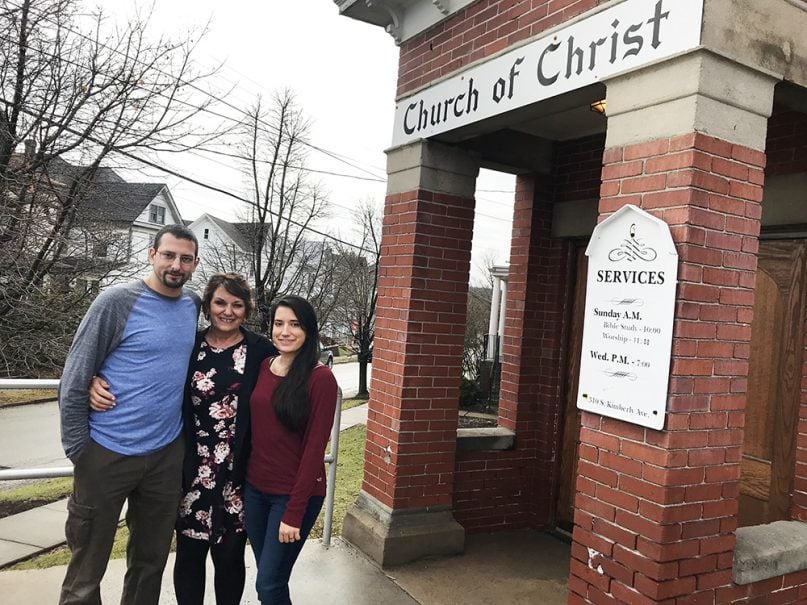 Jimmy Hinton, a certification specialist with the advocacy organization GRACE (Godly Response to Abuse in the Christian Environment), blames “bad theology” for congregations allowing abusers to remain in the pews alongside victims and their families.

“Shepherds are to guard the sheep from the wolves with their lives. Most churches I encounter have never been trained to distinguish the wolves from sheep, so they invite wolves in under the guise of ‘forgiveness and repentance,’” said Hinton, who preaches for the Somerset Church of Christ, about 60 miles east of Uniontown.

Hinton became a victims advocate after his sister Alex Howlett confided to him in 2011 that their father, John Hinton — who spent 27 years as the Somerset church’s minister — had sexually abused her when she was young.

Jimmy Hinton’s report to authorities prompted an investigation that resulted in his father pleading guilty to sexually assaulting and taking nude photographs of four young girls, ages 4 to 7. John Hinton is serving a 30- to 60-year sentence in a Pennsylvania state prison.

Discussing the Brothers case, Jimmy Hinton pointed to questions about whether the former youth minister has named all his victims, as well as Brothers’ decision to file a post-conviction appeal, as indicative of his heart.

Clyde E. Brothers Jr.’s attorney filed a post-conviction appeal, with some portions redacted before being made public.

“Forgiveness is conditioned upon repentance,” Hinton said. “A repentant sexual predator would name every victim, submit to the court authorities and would never do anything to retraumatize his victims or their families.

“Because they are wolves, they don’t care.”

Victims’ families say they are angry with Brothers but also angry at themselves for failing to notice warning signs — such as the former youth minister inviting boys on overnight trips with him.

“The anger that I feel, it just never goes away,” the mother of one victim said, lamenting that her son’s experience with Brothers caused him to give up on God and renounce his faith.

Others gathered around the table nodded their heads and reported similar experiences, saying their grown sons won’t have anything to do with the church.

Judge Leskinen sentenced Brothers to up to five years in prison. However, the former youth minister was released on electronic monitoring pending an appeal of his convictions.

As part of his ruling, the judge told Brothers to give up his firearms.

Leskinen also ordered Brothers not to attend the Uniontown church “until and unless there is a signed waiver of this provision … by the governing authority of the said Church.”

In a post-sentence motion in late January, attorney Jack R. Heneks Jr. said Brothers’ convictions for offenses alleged to have occurred in 1992 and 1993 should fall outside Pennsylvania’s statute of limitations. Heneks also asserted that the judge’s prohibition against Brothers attending the Uniontown church “violates the defendant’s First Amendment rights to freedom of religion and association.”

After Brothers’ conviction, church elders quickly announced a congregational meeting to discuss whether to provide the waiver and allow Brothers to return to the Uniontown church.

About 30 members attended the congregational meeting, Williams said, and “all but three or four said that we didn’t want him to worship with us and to go by what the judge said.” Some said the elders could take the Lord’s Supper to his home.

For now, the elders have not requested the waiver, and Brothers has not returned to church.

But eventually, the leaders will have another meeting with the congregation, Coldren said. They wanted to let a little time pass first.

“I’m not saying we are or are not going to let him back in,” Coldren said. “What’s the difference if he walks in our doors or if he walks in another church’s?”

(Bobby Ross Jr. writes for the Christian Chronicle, where this story first appeared. The original version of this story can be found here. This article has been updated.)