TEMECULA, CALIF. (RNS) — In early March, more than 30 atheist, humanist and secular leaders gathered at a residence overlooking Southern Californian vineyards to discuss politics, social issues and how to draw in more people at a first-ever SoCal Secular Leadership Summit.

The event was the first of three summits planned by Secular Coalition for America, an advocacy group based in Washington, D.C. Later this month, similar gatherings will be held in Greenville, S.C., and Nashville, Tenn. Like Temecula, Greenville is outside of an urban hub, and all three cities’ event atmospheres are more seminar than corporate convention. The organizers of the summit wanted their attendees to be able to see each other.

Sarah Levin, director of grass roots and community programs at Secular Coalition for America, said that her organization recently found that nonbelievers felt well-connected to national secular organizations but disconnected from others like them locally.

“We realized we need to help strengthen these networks of local groups so that they can be mobilized for political advocacy,” Levin said.

To that end, last weekend’s summiteers broke the day up into frequent intensive discussions about common interests, rather than asking them to sit through lectures. The Angelenos talked a lot about homelessness and climate change, while San Diegans picked up on local buzz about offering their fellow residents a public-sector alternative to the corporate monopoly that provides energy.

The planners were also careful to insert long breaks into their days to encourage networking.

“It’s not like they can’t find each other’s information online,” Levin said. “But it’s just not the same as having a personal relationship.”

When they did sit to listen to a presentation, the atheists heard about how to take action on topics such as how to create conversations about atheism in public places or how to work with interfaith groups.

Phil Calderone of Inland Empire Atheists, Agnostics and Humanists spoke to the group about how interacting with faith communities in his area makes others more comfortable with secularism.

“Being in the room normalizes atheism,” he told the group. 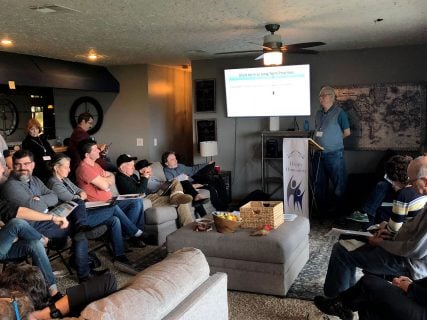 Phil Calderone of Inland Empire Atheists, Agnostics and Humanists speaks about his involvement with interfaith groups at the SoCal Secular Leadership Summit on Mar. 2, 2019. Photo by Heather Adams.

Calderone stressed that atheists don’t have to take a back seat to believers when meeting with them on local issues. While Calderone doesn’t attend local prayer events held by interfaith groups, he said he still suggested interfaith groups add “action points” to these events to further the causes they were asking for help with in prayer — something he said benefited the whole group.

Levin led a talk on how to build relationships with state officials to make sure that policies that are being addressed on a national level, such as addiction recovery and voter registration, and local levels included secular options.

Like many faith organizations, they also spent time talking about how to attract members, especially younger people.

Rebecca Kitchings of the Inland Empire Atheists, Agnostics and Humanists group said they have the largest membership in Southern California with more than 2,500 people on their Meetup, a site and app used to organize online groups that host in-person events or meetings. But not all are active, paying members, something she hopes to increase.

She learned that there may be many more atheists and other secular thinkers in her area than she imagined. During her search she assumed she’d find a dozen or so secular groups in Southern California. Instead she found almost 70.

Kitchings said the summit was another sign that atheists should meet, talk and generally look to their fellow non-believers to be lifted up.

“We have much more common, shared goals and values than maybe we knew,” Clark said. “When we were all in the same room, we realized we are completely on the same team.”