NAIROBI, Kenya (RNS) —  The Catholic Church in Kenya has refuted claims that it has been condoning corruption and allowing corrupt politicians to donate what they have stolen from public coffers to the church.

Archbishop Philip Anyolo told Religion News Service that the church does not allow politicians or any suspected individuals to give their ill-gotten money to the church.

“We condemn any acts of corruption because it’s against God’s will,” said Anyolo. “If you steal money or anything and bring it to the church you are already condemned and you have lost touch with God.”

However, he noted that it was actually difficult for the church to identify money gotten through corruption.

“We urge people not to bring money to church if they know they have stolen from public coffers,” he said. “But as a church we also have no capacity to know whether the money is clean or not.”

Anyolo, who is also the chairman of the Kenya Conference of Catholic Bishops, was responding to claims by Kenyans that the church leaders were fueling corruption in the country by inviting corrupt individuals and politicians to lead fundraisers whereby they donate the stolen money.

Last year, millions of shillings were donated as gifts and offerings to churches, especially the Catholic Church, by politicians in order to be accorded opportunities to greet the faithful and advance their political agenda. For example, between January and June 2018, Deputy President William Ruto donated at least 600,000 US dollars to different churches, more than twelve times his salary in so many months, according to local media reports.

The East African nation of nearly 50 million people is ranked among the most corrupt countries in the world, according to a report by Transparency International. The report shows that in the list of 180 countries, Kenya is ranked 144th, tying with Nigeria.

The Catholic Church, which has about one-third of the country’s population, has recently come under attack for fueling corruption. Politicians are accused of looting public funds and donating the stolen money to churches as they seek votes.

However, the Catholic Church has now taken action against individuals they believe are corrupt by rejecting their offerings and gifts.

Recently, Anyolo rejected a donated car worth $40,000 from Deputy President William Ruto after opposition politicians alleged that the car was bought from the proceeds of corruption, according to published reports.

Ruto had surprised the new head of the Catholic Archdiocese of Kisumu with a comfy car during his installation on January 12.

“Recently, during the installation of Archbishop of Catholic Diocese of Kisumu, someone (Ruto) took a vehicle to the bishop as a gift. When the Pope was informed that the Archbishop had received a car gift, he (Pope Francis) ordered that the vehicle be returned,” said opposition leader Raila Odinga, who is also the AU Special Envoy for Infrastructure and Development. “The car was returned because it was acquired from proceeds of corruption. Some people steal taxpayers’ money and carry it in sacks to churches to sanitize it.” 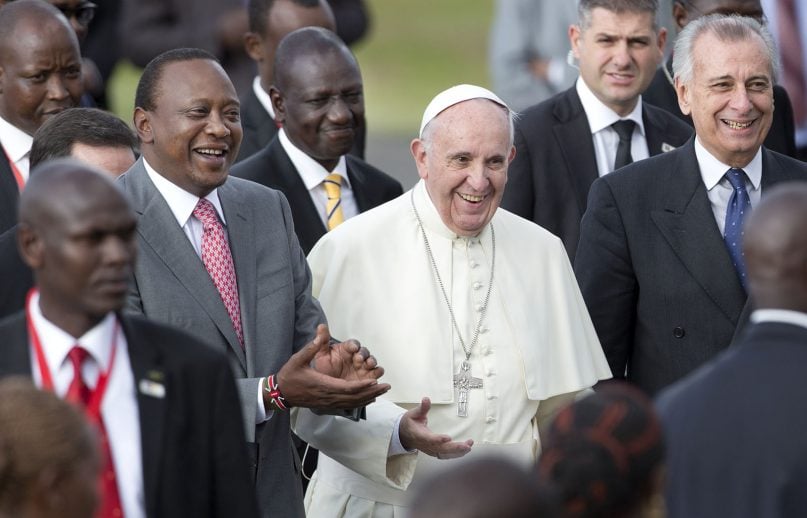 Mr. Ruto denied the allegations of corruption, saying he donated the car to the archbishop, together with President Uhuru Kenyatta, after Catholic legislators requested he do so.

He accused Odinga of “spewing desperate lies” about said vehicle.

“The master of deceit as always is spewing desperate lies,” Ruto said on his Twitter account. “Understandably empowering the church offends magicians and the evil spirits they worship.”

Anyolo, who was appointed as Archbishop of Kisumu by Pope Francis in November 2018, confirmed to RNS that the Mitsubishi Pajero SUV that was donated to him by Ruto was no longer in his possession, nor does he use it.

However, Anyolo said the gift was not rejected because it was from proceeds of corruption but because he was content with the car he was given on the day he was installed as Archbishop.

“Let’s not bring politics in this issue,” he said. “As a church we cannot know if the car was bought from the proceeds of corruption or not. The church has already donated the car to another institution and they are free to sell the vehicle and use proceeds from the sale to better the society,” he said.

But following the recent developments, Catholic churches across the country have joined the war on graft and are condemning corruption and refusing donations from corrupt politicians.

“We are now not supposed to receive any gift from politicians or any person we believe is corrupt,” said one priest who didn’t want to be mentioned. “Corruption is bad and is bringing our country down, and as a church, we resolve to help the government fight the vice.”