(RNS) — About 100 investigators are working to find who is behind a series of church fires that have struck rural areas of Louisiana in recent weeks.

The fires, which have prompted calls for prayer by the state’s governor, destroyed three predominantly black churches in St. Landry Parish, around Opelousas, in late March and early April and caused minor damage to a mostly white Pentecostal church in Vivian, about 200 miles north in Caddo Parish.

Ashley Rodrigue, a spokeswoman for the state fire marshal, said investigators have yet to determine if the three fires at historic Baptist churches in Opelousas and Port Barre are related or if any of them are tied to one at the church in Vivian. But she said the number of investigators is unusually high. It includes 40 federal staffers, including agents from the FBI and the Bureau of Alcohol, Tobacco, Firearms and Explosives; 40 state agency workers; and 20 people from local agencies.

ATF Special Agent Michael P. Knight said in an interview Tuesday (April 9) that its U.S. Bomb Data Center “is looking at fires not only in that area but around the country to see if there’s any similarities or patterns or trends of other fires that have occurred outside of the state.”

The marshal’s office said the fire at the Vivian church was found to be intentionally set. Investigators described the other three fires as having “suspicious elements in each case.” 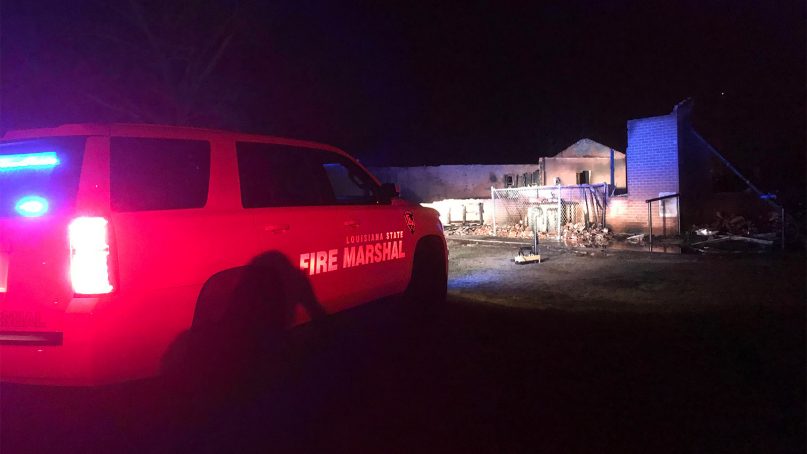 Gov. John Bel Edwards stayed away from pinpointing a cause, focusing instead on church members’ losses.

“Our churches are sacred, central parts of our communities and everyone should feel safe in their place of worship,” said Edwards, in a statement. “We do not know the cause of these fires in St. Landry and Caddo parishes, but my heart goes out to each of the congregations and all of those who call these churches home.”

Citing a verse from the Gospel of John in which Jesus tells his disciples to love each other, Edwards added: “I’m asking the people of Louisiana to follow this teaching and join their prayers to mine as we love and support these congregations.”

U.S. Rep. Clay Higgins, R-La., recorded a video outside the burned brick remnants of St. Mary Baptist Church in Port Barre in which he urged any perpetrator to come forward.

“It’s a predominantly black Baptist church,” Higgins said on the video posted Sunday on his Facebook page. “There could be many reasons why this happened — none of them are righteous. If you participated in this, you have succumbed to evil.”

Higgins, who is known for previously recording Crime Stoppers announcements for a local TV station, predicted whoever is responsible for the three fires in the parish will be apprehended. 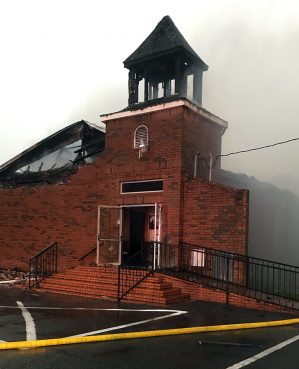 “Your only chance for freedom, real freedom, spiritual freedom from the pain and heartache that you’ve caused, this affront against God himself and his children, your only path to freedom is through jail,” he added. “I advise you to hear my heart, and turn yourself in, because you’re going to jail one way or the other.”

Fires and other violence have plagued African American churches in the South for decades, particularly in the 1960s and the 1990s, but arsonists have also have been known to target both predominantly black and white churches in the past. In 2006, three college students were charged and later served time in prison for a spree that burned nine churches in Alabama.

In 2015, after a massacre that killed nine people at Mother Emanuel African Methodist Episcopal Church in Charleston, S.C., and more than half a dozen black churches burned, more than 1,000 people took part in a Department of Homeland Security webinar that emphasized how houses of worship could prepare for a range of crises.

The Acadiana Advocate, a newspaper located in Lafayette, La., reported that area pastors, including those whose churches recently burned in St. Landry Parish, have scheduled an April 15 meeting to discuss the recent fires and share prevention techniques for all houses of worship in the area.

According to the Bomb Data Center, there were 243 reported incidents at houses of worship in 2017, compared with 256 in 2016 and 293 in 2015. In 2017, 99 of the incidents were labeled as arson, 30 were said to be accidental and 65 were described as “undetermined.” Other categories in that year included three bombings, two hoaxes, 41 bomb threats and three labeled as “natural.”

News
After Roe’s fall, Black churches support some or all reproductive health options
Follow us on Facebook!
Submit your photos to RNS