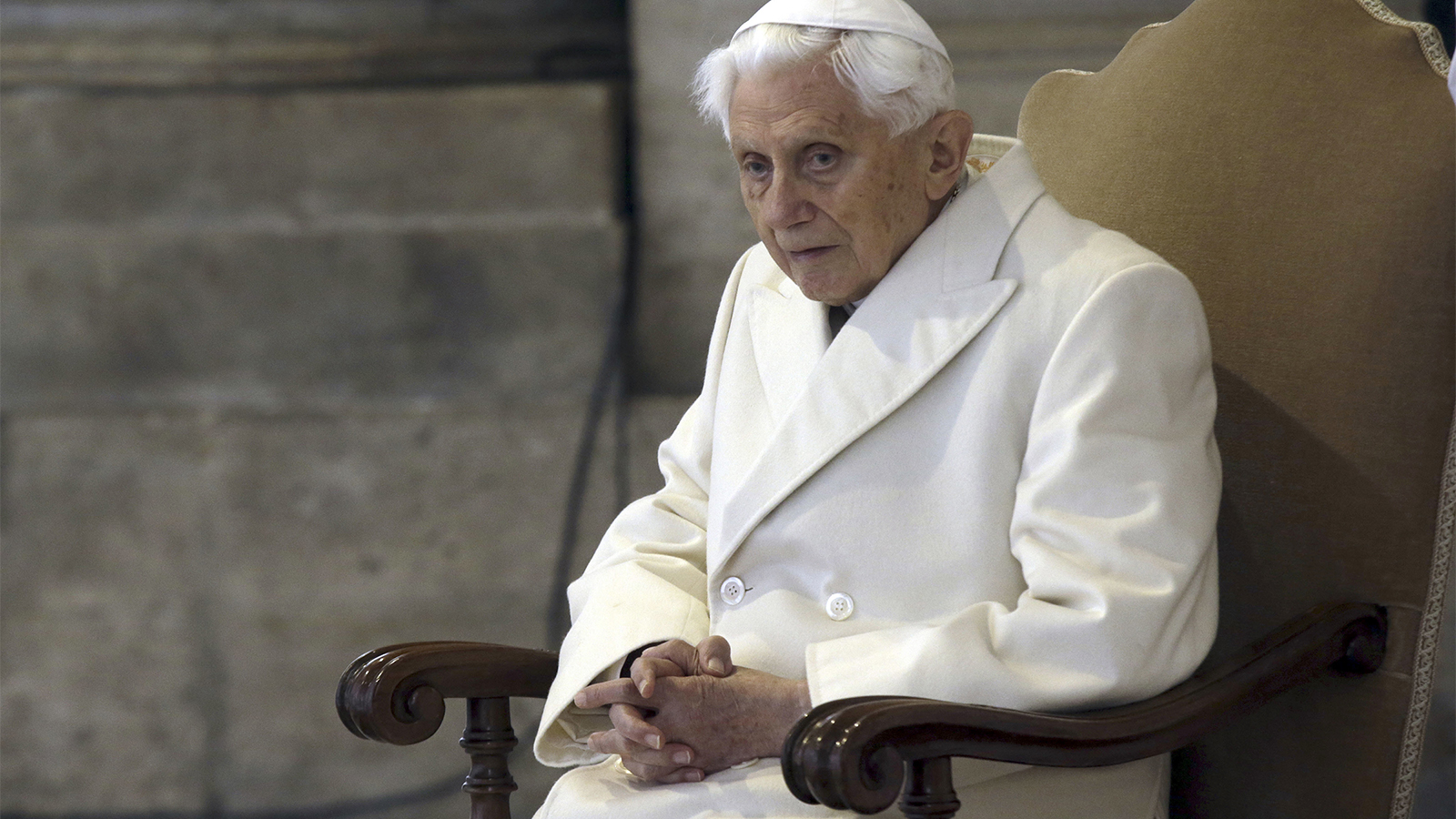 Pope Emeritus Benedict XVI sits in St. Peter's Basilica as he attends the ceremony marking the start of the Holy Year on Dec. 8, 2015, at the Vatican. (AP Photo/Gregorio Borgia)
April 15, 2019
Thomas Reese

(RNS) — The recent essay on clergy sexual abuse by Benedict XVI shows why it was such a good idea for him to resign as pope. In the letter released last week, he shows how out of touch he is with the causes of the abuse crisis.

Fundamentally, Benedict lives in a Platonic world of ideas where facts don’t matter.

Most of the media attention since a German Catholic magazine published Benedict's 6,000-word statement has been focused on Benedict blaming the sex abuse crisis on the collapse of sexual standards in the 1960s.

Actually, he may have a point. Data presented by the 2004 John Jay report on clerical abuse showed that, both in the church and in America as a whole, the number of abuse cases began increasing in the mid-1960s and peaked in the 1970s. Something was happening, not just in the church but in the world.

On the other hand, sexual abuse was occurring prior to the 1960s. The church and America were just better at covering it up.

But Benedict also wants to blame sex abuse on contemporary moral theologians who challenged the church’s traditional, natural law ethics, especially as it applied to sexual ethics. Contemporary moral theology is less rule-based and, rather, takes a more personalistic and relational approach. Challenging the church’s opposition to birth control, as did most theologians, opened the floodgates to all sorts of sexual sins, including child abuse, in his view.

This is a fight Joseph Ratzinger has waged for most of his ecclesiastical career. While he was prefect of the Congregation for Doctrine of the Faith from 1981 to 2005, scores of Catholic theologians were fired from seminaries, reprimanded or silenced. Others practiced self-censorship in order to avoid the wrath of Rome.

It is flabbergasting to hear him in his letter complain that respect for due process kept him from dealing with this infestation. Too many scholars bear the scars of his inquisitional approach to dissent in the church. CDF’s procedures — where it acted as accuser, judge and jury — had no concept of contemporary ideas of due process.

It does not matter that no moral theologian can be found who condoned the sexual assault and rape of children. Facts don’t matter.

It does not matter that abusers came not just from the ranks of liberals like Theodore McCarrick but also from conservatives like Marcial Maciel, the founder of the Legion of Christ.

He points to homosexual cliques in seminaries as if they opened the way for child abuse.

It does not matter that most of the priests who abused in the 1970s were products of an old seminary system that existed before Vatican II, which isolated seminarians from the very men and women with whom they would work and serve. Benedict still considers this the ideal way of preparing priests. Alas, he still wants to blame post-Vatican II theology for all the ills of the contemporary church.

Most importantly, he passes over in silence the truly scandalous failure of the hierarchy to remove abusive priests from ministry where they could abuse again and again. The crisis is not just about the abuse; it is also about the coverup.

Benedict's essay is especially sad because, as prefect of CDF, Cardinal Ratzinger did more to deal with the abuse crisis than anyone else in Rome. I have always defended him against those who accused him of not caring about the crisis. He was not perfect, but he was far ahead of John Paul and other Vatican officials who were in denial and too slow to respond.

It was Ratzinger’s disregard for due process that allowed him to take direct action. Once he recognized the scope of the abuse problem, he often dispensed with a trial after simply reading the priest’s file. If the priest’s guilt was obvious, he was dismissed from the clerical state. Ratzinger broke the logjam of cases by imposing what some canon lawyers felt was the equivalent of martial law. If he had not, it would have taken decades to clear cases through church courts.

His record doesn't excuse his choice to release his letter. Benedict would have done well to keep silent or to have shared his views only with Pope Francis. His message is being used by those who oppose Francis to show what a real pope thinks about sex abuse.

Francis, unlike some of his liberal supporters, does not want to muzzle Benedict. Francis has never been afraid of free discussion in the church. After all, if Francis were to resign and Cardinal Raymond Burke were elected pope, I am sure every liberal would want to know what the retired pope thought about the new papacy.

There are at least three lessons the church should learn from this event.

First, you cannot muzzle former popes any more than you can muzzle theologians. All one can do is urge them to exercise prudence in what they say and then let the debate begin.

Second, the church needs to make clear that there is only one pope. A resigned pope should revert to his baptismal name and put aside the white cassock for a black one. He should not be called pope or pope emeritus. Ratzinger has a right to express his opinions, but they have no more magisterial weight than those of any other retired bishop.

Finally, since even dead popes are becoming rallying points for different factions in the church, we should stop canonizing popes so soon after their deaths, lest the canonization be politicized. Perhaps a good rule would be to delay consideration of canonization of a pope until after all the cardinals and bishops he appointed are dead.

The message I would like to see from Benedict is one forbidding his friends from crying “Santo subito” (“Make him a saint immediately”) at his funeral. I would expect the same message from Francis.