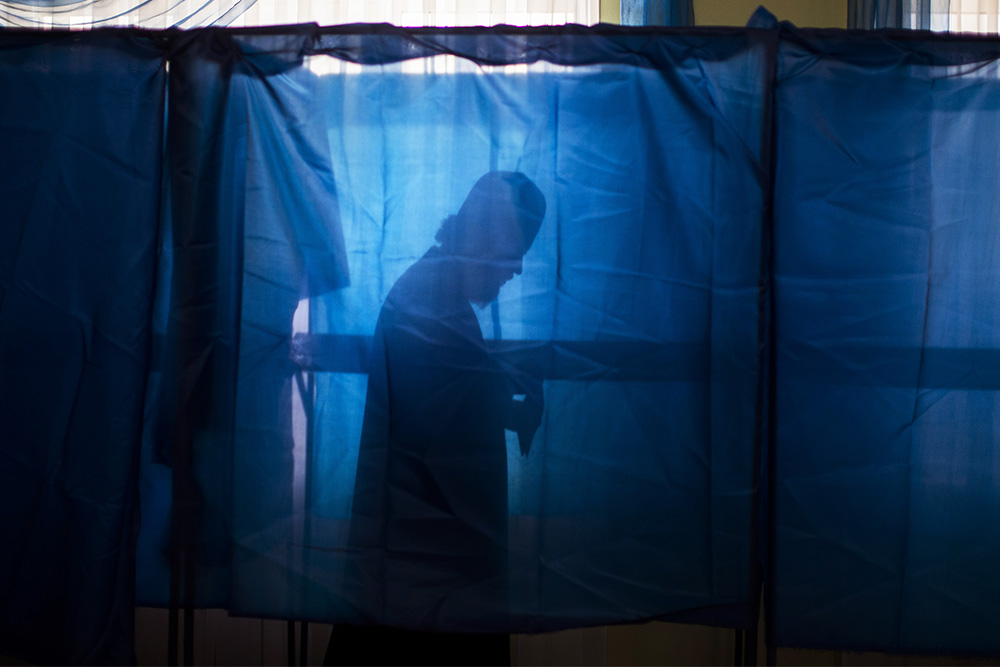 Baryshevsky Victor, Bishop of the Kiev Monastery of the Caves, holds his ballot at a polling station, during the presidential elections in Kiev, Ukraine, on March. 31, 2019. (AP Photo/Emilio Morenatti)
April 23, 2019
Jeffrey Salkin

If you had told this story to a Jew sixty years ago, he or she would have said: "Stop. This is a joke, right?"

Just this past week, Ukraine elected a Jewish comedian, Volodymyr Zelensky, as its president.

It was a landslide. He defeated the incumbent president, Petro Poroshenko, who had campaigned as a bulwark against Russian aggression and a champion of Ukrainian identity.

The prime minister of Ukraine is Vlodymir Groysman.

He is also a Jew.

There are only two countries in the world that have both a Jewish president and a Jewish prime minister.

Let's talk about the history of Jewish-Ukrainian relations.

Let's just say that it has not been a rousing round of "kumbaya."

In the 1600s, the Polish-Lithuanian Commonwealth included Ukraine. The Jews became middlemen between the Polish Catholic landlords, and the Greek Orthodox Ukrainian peasants.

The Jews found themselves in an unenviable and impossible situation, for neither the first nor last time in Jewish history. They were in the middle, beset on both sides -- caught between the powerless and the powerful.

This is how the historian Simon Dubnow described it (quoted in Marc Rosenstein, Turning Points in Jewish History).

Thus the Ukrainian Jew found himself between hammer and anvil, between the pan [landowner] and the khlop [peasant], between the Catholic and the Greek Orthodox, between the Pole and the Russian. Three classes, three religions, and three nationalities, clashed on a soil which contained in its bowels terrible volcanic forces -- and a catastrophe was bound to follow.

It was the uprising of 1648. History also knows it as the Cossack-Polish War. Its leader was the Ukrainian national hero, Bogdan Khmelnytsky (or Chimielnitsky, or Chmielnicki -- there are many variant spellings). They were striking back against the Polish landlords.

And Jews, caught in the middle, died.

From a contemporaneous account -- Yeven Metzulah, by Nathan Neta Hanover:

It came to pass in 1648 that there was a Cossack officer named Chmielnicki (may his name be blotted out)...who was extremely wealthy, cunning, and a brave warrior.

Many Jews in communities who could not flee...were killed for the sanctification of God's name, cruel and harsh deaths. Some were skinned alive and their flesh thrown to the dogs, some had their hands and feet cut off and were thrown in the road to be trampled by horses...Some were buried alive. Children were slaughtered at their mothers' breasts...There was no bizarre means of murder that they did not inflict on them. And many were taken prisoner by the Tatars...Women and girls were raped and carried off to be servants and concubines. Thus they did in all the places they reached, and also to the Polish gentiles -- especially priests and monks. Thousands of Jews were killed east of the Dnieper, and hundreds were forced to convert. Torah scrolls were torn and made into sacks and shoes.

The violence decimated Jewish life in Poland. Between 1648‑1658, as many as 100,000 Jews died and three hundred communities were destroyed.  It was to be the greatest devastation in Jewish life until the Holocaust.

During the Holocaust, there were many acts of Ukrainian collaboration with the Nazis in mass murder.

But, if I leave the story there, I am committing violence to the complicated narrative of Jews and Ukrainians.

Because the story of those interactions is far more nuanced than we had once thought.

Consider the extraordinary acts of generosity and rescue that occurred during the Holocaust.

According to historian, Martin Gilbert:

Yad Vashem has recognized 1755 Ukrainians as Righteous Among the Nations. We dare not question their bravery. They risked their lives to save Jews.

Are you looking for a Pesach miracle?

Ukrainians reached into their collective conscience, and overwhelmingly elected a Jew as President.

The spirits of those righteous rescuers were singing quite loudly.

Now, the larger question for all those who still harbor anti-Ukrainian "stuff."

Can you imagine a Jew winning an American presidential election by a landslide?

All I can say is: God has a wicked sense of humor.