But about a year ago, the 26-year-old Indianapolis resident was going through a difficult time.

That’s when she found a sacred book to lean on.

Or more specifically, “Harry Potter and the Sacred Text,” a popular podcast that uses the seven-book series by author J.K. Rowling as the basis for discussions of virtues and for spiritual practices.

RELATED: How the ‘Harry Potter’ books are replacing the Bible as millennials’ foundational text

Finding a podcast that treated the books “in a spiritual way” meant a lot to Kanalos, who was already a fan of the beloved series about a young wizard and his friends engaged in an epic battle of good and evil.

“I’ve always kind of looked at it as something that I could relate to,” she said. “But I never thought about it in these deeper ways.”

The chance to discuss the series from a spiritual standpoint brought Kanalos and 300 other fans to a live show of “Harry Potter and the Sacred Text” last week in a sold-out auditorium at the Indianapolis Public Library’s Central Library.

In the episode, which will be released this summer, co-hosts Vanessa Zoltan and Casper ter Kuile led a discussion of the final chapter of “Harry Potter and the Order of the Phoenix,” the fifth book of the series. They were joined by the show’s producer, Ariana Nedelman, and YouTube celebrity John Green, an Indianapolis native and author of the best-selling young adult book “The Fault in Our Stars.”

“We see a lot of people trying to take care of Harry in this chapter in the face of his grief, and some people are more successful than others, and I’m wondering where you see this happening and if there’s anything we can learn about loving people in hard times from this chapter,” Nedelman said during the show.

The conversation eventually turned to how one can show love to those who are hurting in real life. That includes not rushing to cheerful, but unhelpful platitudes.

Zoltan shared how she discovered her calling as an “atheist chaplain” while sitting with a friend whose mother was dying and who was tired of hearing from well-meaning people that she was going to a better place.

Green shared a story from his own experience as a chaplain when he was studying to become an Episcopal priest — an experience that reportedly led him to become a writer instead and inspired “The Fault in Our Stars.”

A supervisor told Green there were “Easter Christians”  and “Good Friday Christians.”

“I do like a Good Friday service. I do like to weep and get down on my knees and kiss the cross,” he said. “And then Easter comes along, and I’m like, ‘Yeah, that’s nice.'”

The idea for the podcast grew out of Zoltan’s own struggles while she was studying at Harvard Divinity School. 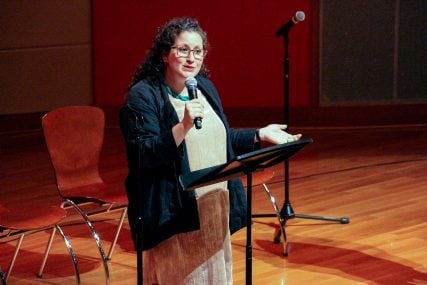 A grandchild of Holocaust survivors, she wasn’t sure what to do with the idea of a benevolent God. And she wasn’t sure how to pray or what it meant. But she thought she’d better figure it out before she graduated, she said.

So she asked a professor to teach her to pray using her favorite novel, Charlotte Brontë’s “Jane Eyre.”

Together, they developed a system for what it meant to treat a text as sacred. She found that the more time you spend with a text, the more gifts and blessings it will give.

After attending a small discussion group Zoltan was leading about “Jane Eyre,” ter Kuile — a friend and classmate at Harvard Divinity School — told her she was on to something.

It would be better, though, if she focused on “a book people wanted to read,” Zoltan recalled him telling her.

Thus, “Harry Potter and the Sacred Text” was born.

It started as a discussion group led by Zoltan, who calls herself a Jewish atheist, and ter Kuile, who describes himself as religiously unaffiliated. That group turned into a podcast, which quickly jumped to No. 2 on iTunes charts in the United States when it first was released in 2016.

Just about any text can be treated as sacred, Zoltan said. But, she added, “Harry Potter” is uniquely well suited because of its ubiquity — the book series has launched spinoffs, films, a Broadway play, a theme park, even an entire genre of music called “wizard rock” — and its overarching message of love.

Karen Swallow Prior, an English professor at evangelical Liberty University and author of “On Reading Well: Finding the Good Life Through Great Books,” thinks treating “Harry Potter” or any other work of literature as sacred is a bit of a stretch.

“In a literal sense, no book is a sacred text, no matter how great a literary work it is,” Prior said. “However, there is a way in which all language — and, in particular, literary language — does point us to the transcendent and the divine.”

For fans lining up at “Harry Potter and the Sacred Text” live shows to buy T-shirts reading “Harry Potter is my sacred text,” that’s not far off.

In some cases, the podcast’s reading of the text — chapter by chapter, book by book — has pointed fans back to their own faith traditions.

“One of my favorite things that listeners will say to us sometimes is, ‘You brought me back to my religion because you showed me what my religion could be,’” Zoltan said.

Zoltan hopes the podcast, which draws hundreds of people for its live shows and has inspired more than 30 discussion groups around the world, can be a model for religious communities struggling to engage millennials at a time when fewer younger Americans belong to houses of worship.

“Our weekly podcast is sort of like your standard Friday night or Sunday morning service, but our live shows are high church,” she said. “It’s Easter, it’s Yom Kippur, it’s the one time a year you actually go to church.”

It would be a tragedy if those real-life religious communities were to disappear, Zoltan said: They’re the ones who host Alcoholics Anonymous meetings in their buildings, who organize blanket drives and drop off casseroles when members are going through tough times.

Still, she said, online communities literally save lives, making space for people to connect around interests and identities they may not share with their real-life neighbors.

“One good thing about digital media and internet is that we can create our own communities across time and space, and that can be really lovely,” said the Rev. Jasmine Smart, a pastor in the Presbyterian Church (USA).

Smart said she drove five hours from Detroit to attend the taping of “Harry Potter and the Sacred Text” in Indianapolis.

The 28-year-old pastor said the podcast has made her sermons better — and, days before the major Christian celebration of Easter, she was looking for inspiration.

Millennials have grown up with the “Harry Potter” series and with a “more fluid understanding of spirituality and faith traditions,” Smart said. The books have emerged as something that was formative for them — something they still consider important, she said.

Reading “Harry Potter” as a kid, she said, she saw some of the deeper themes in the text, but very literally — including echoes of Christianity in Harry’s resurrection in the final book of the series.

She’s now reading the series again as an adult with Zoltan and ter Kuile as spiritual guides.

“This has been such a gift to me to be able to see this and to read it in these themes,” she said.