VATICAN CITY (AP) — Pope Francis issued a groundbreaking law Thursday (May 9) requiring all Catholic priests and nuns around the world to report clergy sexual abuse and cover-up by their superiors to church authorities, in a new effort to hold the Catholic hierarchy accountable for failing to protect their flocks.

The new church law provides whistleblower protections for anyone making a report and requires all dioceses around the world to have a system in place to receive the claims confidentially. And it outlines procedures for conducting preliminary investigations when the accused is a bishop, cardinal or religious superior.

It’s the latest effort by Francis to respond to the global eruption of the sex abuse and cover-up scandal that has devastated the credibility of the Catholic hierarchy and his own papacy. And it provides a new legal framework for U.S. bishops to use as they prepare to adopt accountability measures next month to respond to the scandal there.

“People must know that bishops are at the service of the people,” said Archbishop Charles Scicluna, the Vatican’s longtime sex crimes prosecutor. “They are not above the law, and if they do wrong, they must be reported.”

The law makes the world’s 415,000 Catholic priests and 660,000 religious sisters mandated reporters. That means they are required to inform church authorities when they learn or have “well-founded motives to believe” that a cleric or sister has engaged in sexual abuse of a minor, sexual misconduct with an adult, possession of child pornography — or that a superior has covered up any of those crimes.

The law doesn’t require them to report to police, as victims have demanded. The Vatican has long argued that different legal systems in different countries make a universal reporting law impossible, and that imposing one could endanger the church in places where Catholics are a persecuted minority. But the procedures do for the first time put into universal church law that clergy must obey civil reporting requirements where they live, and that their obligation to report to the church in no way interferes with that.

If it is implemented fully, the Vatican could well see an avalanche of abuse and cover-up reports in the coming years. Since the law is procedural and not criminal in nature, it can be applied retroactively, meaning priests and nuns are now required to report even old cases of sexual wrongdoing and cover-ups — and enjoy whistleblower protections for doing so.

Previously such reporting was left up to the conscience of individual priests and nuns. Now it is church law. There are no punitive measures foreseen if they fail to report, and similarly there are no sanctions foreseen if dioceses, for example, fail to comply. But bishops and religious superiors could be accused of cover-up or negligence if they fail to implement the provisions, or retaliate against priests and nuns who make reports against them.

The law defines the crimes that must be reported as: performing sexual acts with a minor or vulnerable person; forcing an adult “by violence or threat or through abuse of authority, to perform or submit to sexual acts”; and the production, possession or distribution of child pornography. Cover-up is defined as “actions or omissions intended to interfere with or avoid” civil or canonical investigations. 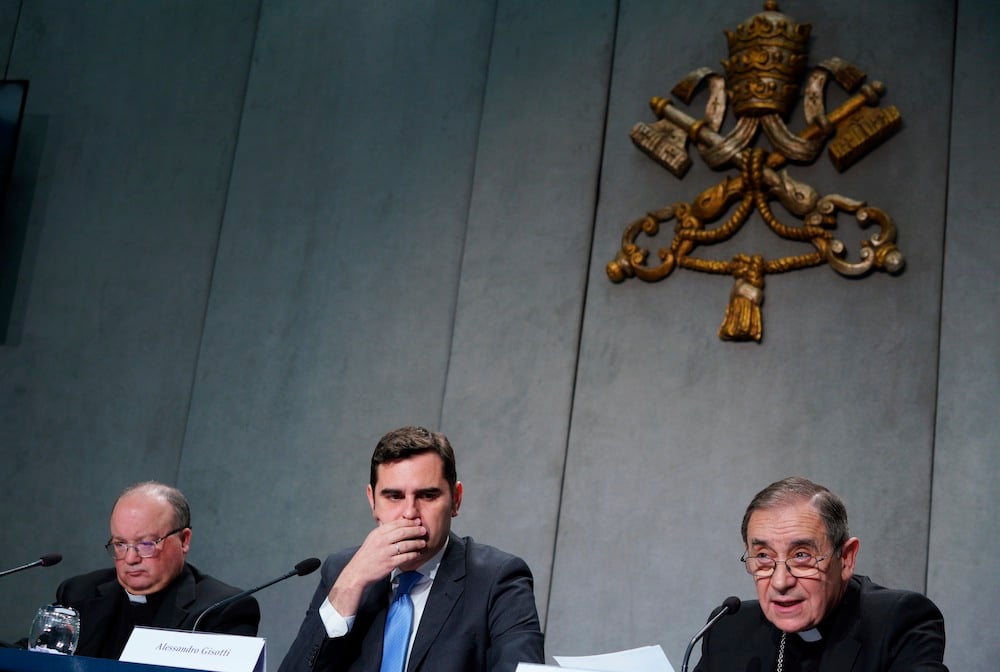 From left, Malta Archbishop Charles Scicluna, Vatican spokesman Alessandro Gisotti and Monsignor Juan Ignacio Arrieta talk to journalists during a news conference to present the new sex abuse law, at the Vatican’s press room in Rome on May 9, 2019. Pope Francis issued a groundbreaking law Thursday requiring all Catholic priests and nuns around the world to report clergy sexual abuse and cover-up by their superiors to church authorities, in an important new effort to hold the Catholic hierarchy accountable for failing to protect their flocks. (AP Photo/Andrew Medichini)

Cardinal Marc Ouellet, head of the Vatican’s bishops office, said the inclusion of sex crimes involving adults was a clear reference to cases of sexual abuse of nuns and seminarians by their superiors — a scandal that has exploded in recent months after reports, including by The Associated Press and the Vatican’s own women’s magazine, of sisters being sexually assaulted by priests.

But Scicluna said it obviously covered lay people as well.

In another legal first for the Vatican, the pope mandated that victims reporting abuse must be welcomed, listened to and supported by the hierarchy, as well as offered spiritual, medical and psychological assistance.

The law says victims can’t be forced to keep quiet, even though the investigation itself is still conducted under pontifical secret. And in a novelty, the law requires that if victims request it, they must be informed of the outcome of the investigation — again a response to long-standing complaints that victims were kept in the dark about how their claims were handled.

But the key point of the law is to decree that the church’s own priests and nuns are mandated reporters and to require every diocese around the world to create an accessible, confidential reporting system to receive claims of sexual abuse and cover-up. The other key element outlines the preliminary investigation procedures to be used when the accused predator is a member of the church hierarchy.

Victims and their advocates have long complained that bishops and religious superiors have escaped justice for having engaged in sexual misconduct themselves, or failed to protect their flocks from predator priests. Bishops and religious superiors are accountable only to the pope, and only a handful have ever been sanctioned or removed for sex abuse or cover-up, and usually only after particularly egregious misbehavior became public.

Last summer, the scandal over ex-Cardinal Theodore McCarrick epitomized the trend: McCarrick rose to the heights of the Catholic hierarchy even though he had credible allegations of sexual misconduct against him that the Vatican had received. Francis ultimately defrocked McCarrick earlier this year after a U.S. church investigation determined he sexually abused minors as well as adult seminarians.

The new procedures call for any claim of sexual misconduct or cover-up against a bishop, religious superior or Eastern rite patriarch to be reported to the Holy See and the metropolitan bishop, who is a regular diocesan bishop also responsible for a broader geographic area than his dioceses alone.

Unless the metropolitan bishop finds the claim “manifestly unfounded,” he must immediately ask permission from the Vatican to open a preliminary investigation and must hear back from Rome within 30 days — a remarkably fast turnaround for the lethargic Holy See. The metropolitan then has an initial 90 days to conduct the investigation, though extensions are possible.

The law makes clear he can use lay experts to help, a key provision that is already used in many dioceses to give bishops expert advice on handling cases from people with law enforcement or medical backgrounds. And it recommends that a special fund be set up to pay for the investigations, particularly in poorer parts of the world.

Once the investigation is completed, the metropolitan sends the results to the Vatican for a decision on how to proceed. The new law effectively stops there; existing procedures are in place for further investigation and possible sanction of bishops, though legal experts have said those 2016 procedures too require an overhaul since they are far from clear or efficient.

The new law does, however, require Vatican offices to share information throughout the process, since an untold number of cases have fallen through the cracks thanks to the silo-like nature of the Holy See bureaucracy, where each congregation zealously guards its own turf and files.

The use of the metropolitan bishop to conduct the preliminary investigation was first publicly proposed by Chicago Cardinal Blase Cupich at a meeting of the U.S. Conference of Catholic Bishops in November. Cupich elaborated on it when he addressed Francis’ February sex abuse summit, which the pope convened to demand a global response to the problem.

The procedures published Thursday are likely thus to form a key legal framework for U.S. bishops when they meet in Baltimore June 11-13 to adopt new accountability procedures.

The U.S. hierarchy has been under immense public pressure to hold itself accountable for sexual misconduct and cover-up stemming from both the McCarrick scandal and the release of the Pennsylvania grand jury report. It was apparently an open secret that McCarrick slept with seminarians, and yet his brother bishops allowed him to become their spokesman when they first adopted measures to combat child sex abuse in 2002.

The law goes into effect June 1 for an initial three years. Dioceses must establish the reporting system and confirm it is in place to the local Vatican embassy by June 1, 2020.