CAIRO (RNS)— A Saudi billionaire whose father endowed a chair in comparative religion at the American University in Cairo has pressured the school to take the position away from an American scholar teaching Egyptian students about religions other than Islam, sources told Religion News Service.

According to Adam Duker, who has held the Abdulhadi H. Taher Chair of Comparative Religions at the school since 2016, Saudi businessman Tarek Taher persuaded the university’s president, Francis Ricciardone, to withdraw the title awarded in Duker’s contract after the professor refused Taher’s demand that the professor advocate for Islam over other religions in his teaching and scholarship.

A religious historian of Christian reformation movements in early modern Europe, Duker teaches an ecumenical curriculum that introduces students to the academic study of Christianity, Islam, Judaism, including lectures on Buddhism and Hinduism, in a “Religions of the World” survey course at the university.

Duker said in an interview with RNS that Taher requested that Duker encourage his non-Muslim students to convert to Islam.

“Taher asked to pre-approve my lectures before teaching them and only teach other religions in such a way as to prove they were ‘incorrect’ and to convert students to Islam,” said Duker. 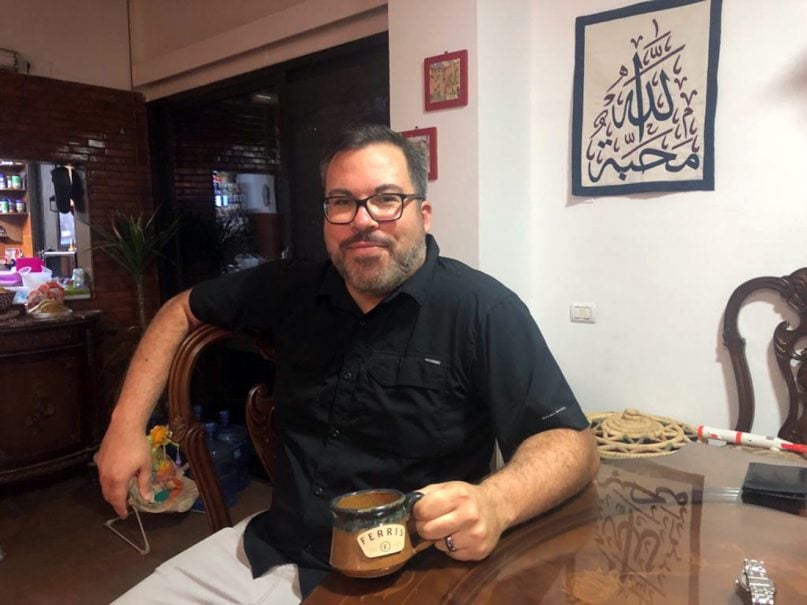 Professor Adam Duker on April 29, 2019, in Cairo, Egypt. Duker introduced his Egyptian undergraduates to world religions at The American University in Cairo, but an influential Saudi donor intervened to stop him. Duker’s departure from Egypt raises questions about religious diversity and academic expression at one of the few American-accredited universities in the Middle East. RNS photo ARA Network

Earlier this year, the university removed the Taher chair from the listing of endowed professorships on its website. School administrators told Duker in July of 2017 he should no longer use the title in conjunction with his official duties and informed him that the donor abolished the chair without offering an alternative post or compensating Ducker for contractual abrogation, according to an email from the provost reviewed by RNS. His last day teaching will be May 15, according to Duker.

The university’s spokesperson, Rehab Saad, declined to comment on the matter, citing confidentiality rules, but confirmed that Duker will no longer be employed by the university.

“We can confirm that Adam Duker, former assistant professor at AUC, has resigned from the University, effective October 2019,” said an email to RNS from Saad.

“The AUC respects the confidentiality of individual personnel cases,” the statement added, referring RNS to the school’s freedom of expression policy. “As a matter of policy, therefore, the University does not comment on questions from the media prompted by employees claiming grievances, while reserving its legal rights with respect to defense against slander or libel.”

Meanwhile, Duker said he had been threatened by the university for continuing to use his title. “Your continuous use of this title is causing financial and reputational damage to AUC, for which we intend to hold you fully liable under the law,” AUC General Counsel Sunanda Holmes wrote in a Feb. 6 email to Duker reviewed by RNS.

AUC was founded by Presbyterian missionaries from the United States in 1919, but within two decades it became a non-sectarian institution. Its 6,500-member student body is estimated to be as much as 90-percent Muslim, with most of the rest being Christian, according to the Egyptian government.

The AUC is also the only Egyptian institution of higher learning certified by the Middle States Commission on Higher Education, a U.S. credentialing consortium. It has received millions in U.S. taxpayer funding since the 1980s. 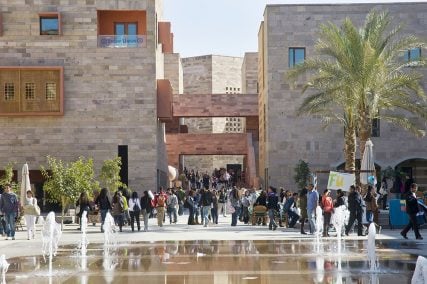 People walk around The American University in Cairo. Courtesy photo

The endowment for the Abdulhadi H. Taher Chair, at approximately $3.5 million, is the largest endowment for the humanities in the Arabic-speaking world. It was established in 2002 by Tarek Taher’s father, the Saudi billionaire Abdulhadi Taher, who died in 2013. The older man dedicated the chair “to support a course of study which exemplifies the beliefs of Dr. Taher by teaching religious tolerance and equality, thereby promoting peace,” according to the AUC’s website.

Tarek Taher is an heir to his father’s fortune and currently serves as the vice chairman of his father’s company, the Jeddah-based Al-Taher Group. He did not respond to a request for comment.

Duker’s problems began in January 2017, according to the professor, when Ricciardone asked him to address Taher’s concerns about teaching comparative religion to a predominantly Muslim student body. Ricciardone also requested that Duker further cultivate the Saudi as an AUC donor. This led to a meeting at Taher’s mansion in Malibu, Calif. that Duker described as “truly bizarre.”

At the meeting, Duker recalled, Taher demanded the right to pre-approve all of Duker’s lectures and course materials in advance and insisted that he not teach any non-Abrahamic religions.

Since then, Duker and his students have faced other issues. In 2017 correspondence to AUC administrators, seen by RNS, Taher objected to the professor’s use of the Oxford translation of the Koran, which uses the English word “God” instead of the Arabic “Allah” to describe the supreme being.

Taher also sent messages to individuals on campus on a student Facebook page claiming that Duker — who identifies as a Christian from a Jewish background — is a “Zionist” trying to use funds from his father’s chair “to take students to Israel” and that he “wanted Muslim students to clean a Jewish graveyard.” These messages have been reviewed by RNS.

Those comments referred to a November 2017 field trip Duker took his students on that included local religious landmarks such as the Sultan Hassan and al-Rifai Mosques, the Coptic Christian Hanging Church and the historic Ben Ezra synagogue. During this outing, the professor and his students were harassed by Egyptian government officials who appeared at the synagogue, according to Duker and his students.

“They were yelling aggressively telling us to leave, asking students if they were Muslim and questioning us why we were at the synagogue,” recalled student Alex Ben Ghanem, who was on the field trip.

The officials pulled the students off the synagogue’s bimah, the platform from which the Torah is read.

Duker was led out of the synagogue by men wielding machine guns in front of his students. Some female students who wear the traditional hijab (head scarf) said they were interrogated about whether Duker had been trying to convert them to Judaism, according to Duker and other students.

The officials mentioned “Taher” several times during his interrogation, according to Duker.

Some students said they sent text messages to the U.S. Embassy, and, after approximately 45 minutes of being threatened with arrest, Duker was released.

Meanwhile, the university launched an investigation targeting Duker, the professor said, noting he was not interviewed in the probe. His students confirmed to RNS that they had been interviewed.

“University officials let us walk out of its doors onto a field trip without proper backing,” said Ben Ghanem. “But knowing how AUC functions, I kind of sensed that they would blame the professor and no one else. A couple of days after, it was clear there was the possibility of him (Duker) being (disciplined).”

Duker’s students say Ricciardone and other university officials have damaged the school’s already fading reputation as a rare sanctuary for open inquiry and free discussion in Egypt, where Muslims and Christians are just beginning to engage in interfaith dialogue.

“Because Egypt is a Muslim country, it’s really hard to talk about these things, and if you don’t agree with any aspect Islam you can’t say so out loud,” said Yasmine Sakr, a 22-year-old economics and marketing communications student who is Christian and who enrolled two years ago in Duker’s comparative world religions course.

“Professor Duker taught the class in a very objective way — and I was able to have open conversations with Muslim classmates about the differences and similarities and give my opinion without being scared,” she added. “It was my favorite class at AUC.”

In April, the university’s Faculty Senate Grievance Committee issued a formal finding expressing concern that Tarek Taher was allowed to interfere in academic matters and influence the provost’s decision to strip Duker of his title, according to the committee’s ruling, which was reviewed by RNS.

“This interference set a very dangerous precedent and infringed on Dr. Duker’s academic freedom,” the committee wrote in an April 6 report submitted to Professor Amr Shaarawi, chairman of the university senate.

At the same time, the relationship between Duker and the university continues to deteriorate. On May 5, a university secretary called Duker a “kyke,” a slur for Jews, after discovering that he had asked a student to translate his request to custodial staff to help box up his books.

The university, through its spokesperson, said that it has “opened an investigation and will take swift action as appropriate,” according to a statement emailed to RNS.

Despite the difficulties he has encountered with the Saudi billionaire, Egyptian officials and the AUC administration, Duker does not entirely regret coming to Cairo, even as he says his primary motivation was to develop the only non-sectarian comparative religions program in the Islamic world and the endowed chair, which opens doors in academia and in the community.

“The opportunity to come to Egypt to hold the largest humanities chair in the Islamic world was one of the determining factors that drew me to AUC,” he said. “In academia, a named chair is a prestigious honor that opens many doors. I have been able to use the platform of my chair to initiate interreligious dialogues in the community.”

Religion Hub
Fire at Cairo Coptic church kills 41, including 15 children
Follow us on Facebook!
Submit your photos to RNS