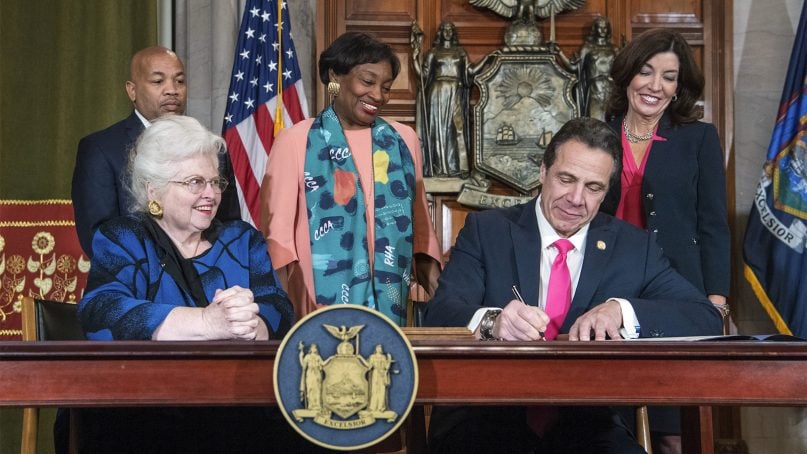 In fact, a Marist poll conducted in February for the Knights of Columbus, a Catholic organization, found that Americans, in what Marist called “a substantial, double-digit shift,” were now equally as likely to describe themselves as pro-life as pro-choice.

This shift was mostly attributable to shifts toward the pro-life label among Democrats — moving from 20 percent to 34 percent toward a pro-life stance, according to Marist — and young people. They were presumably reacting with revulsion toward the new laws that removed all restrictions on abortion, codifying in law that if Roe v. Wade is overturned, women in those states have a legal right to terminate their pregnancy at any stage and for any reason.

I speak from personal experience. A millennial who was always pro-choice, I’ve without a doubt become more sympathetic to pro-life arguments over the past few years, in part due to Democrats’ ever more enthusiastic support for abortion rights without any restrictions at all.

So I was unprepared for my discomfort with new “heartbeat bills” passed in Georgia and Alabama this month, which will effectively criminalize all abortions after six weeks, when fetal heartbeats are usually detectable.

The state laws, which most believe were passed in hopes of giving the Supreme Court the chance to overturn the permissive abortion regime it inaugurated with its 1973 Roe decision, do not include exceptions for rape and incest. The two acts differ in that the Alabama law explicitly forbids prosecution of the woman, while the Georgia law encourages it.

As with the extreme Democratic laws in New York and Virginia, the newly passed Republican bans will be unpopular. Pollsters will find that any recent gains in pro-life identification erode as Americans consider whether Alabama’s vision of justice is correct: A rape victim obtains an abortion, and the doctor gets a substantially longer prison sentence than the rapist. Alabama Gov. Kay Ivey signs a bill that virtually outlaws abortion in the state on May 15, 2019, in Montgomery, Ala. Republicans who support the measure hope challenges to the law will be used by conservative justices on the U.S. Supreme Court to overturn the Roe v. Wade decision that legalized abortion nationwide. (Hal Yeager/Alabama Governor’s Office via AP)

After years of interest groups’ fear-mongering and fundraising over abortion restrictions proposed, enacted and litigated within the framework of Roe, we now have a glimpse of what the abortion debate will look like if Roe v. Wade is overturned and states are freed to impose local limits or outright bans.

Our political system, designed to accommodate compromise, will not handle the new reality very well. Even as we get a clearer view of what each side is ultimately advocating for, it’s not likely that our divided political climate will allow either side to prevail decisively and indefinitely.

Given the parties’ capture by extremist, unyielding interest groups and the elimination of pro-choice Republicans and pro-life Democrats from government, all incentives and opportunities for compromise have disappeared.

In most European countries, where the political systems encourage consensus, abortion is widely available on request during the first trimester but generally illegal afterward. There are other differences, including waiting periods that would horrify American pro-choice activists. Methods also differ: More European abortions are accomplished medically (pill or injection) than surgically (suction or dismemberment).

Americans have a basic moral intuition about abortion, one that is seen even in the nuanced polling of partisans and ideologues: We want fewer abortions not more. We think they should be earlier in pregnancy, not later. And we basically respect both the rights of women who seek abortions and the consciences of people who oppose them.

Unfortunately, the great American middle’s ambivalence about abortion rights finds no expression in our political system, in which interest groups and politicians wage total war against the other side. Instead of finding a way to do the best for the most, we fight over the indiscernible question of when a person deserves legal protection.

One party refuses to acknowledge the life of a child until it draws its first breaths. The other party thinks a microscopic zygote is as much of a person as you or I. There is no middle ground to catch hold of for compromise.

Each party is condemned by its respective (purported) paradigm of belief. Democrats claim science and progress, yet the science is against them, and technology increasingly shows that life is present and more complex at ever earlier stages than we perceived before.

Republicans lead with an ethics formed by faith, and yet their platform cares greatly for embryos and fetuses and hardly at all for needy children. Their bans are never accompanied by robust funding for women who will now be forced to carry unwanted pregnancies to term. These women and their families need support, and the GOP turns its back while pro-life advocates of goodwill lack the capacity or inclination to meet the material needs of hundreds of thousands of women who will become mothers under the new abortion criminalization regime.

Can abortion-rights supporters accept that more legal protection will ultimately be accorded to the unborn, at least at some stage? Can the pro-criminalization advocates be content with the reality that, even though abortion will remain legal in some cases, they can still fight it on the demand side? I have serious doubts.

I used to think our political institutions were resilient enough to endure with legitimacy in the face of profound disagreement. But increasingly I fear that our extreme — and extremely broken — abortion debate will lead to violence.

And I don’t just mean inside the womb.