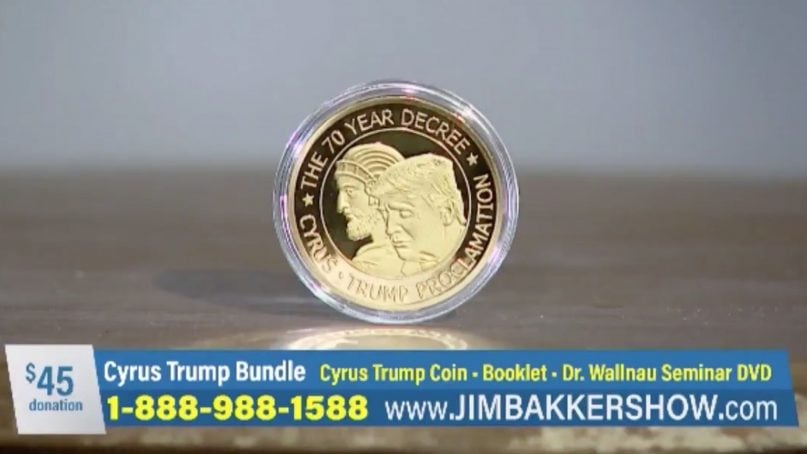 (RNS) — For centuries, Catholics have used rosary beads to aid them in the practice of prayer.  Some American Protestants view their Bibles as a kind of talisman or amulet that transmits supernatural power.

And today some American charismatic Christians pray using a coin emblazoned with a picture of Donald Trump.

On Monday (May 13), a charismatic preacher named Lance Wallnau appeared on the program of disgraced televangelist Jim Bakker to hawk a Donald Trump/King Cyrus gold coin.

He claimed that the coin can be used as a “point of contact” between Christians and God as they pray for the re-election of Trump in 2020.

Bakker’s show, which is syndicated daily on his PTL (Praise the Lord) Television Network, is known for selling his viewers products to help them survive the coming apocalypse. With the click of a mouse, a Christian who wants to prepare for the end of the world can buy buckets of freeze-dried food (the “30 Day Fiesta” Bucket appears to be popular), duffel bags that can withstand electromagnetic pulse attacks, flashlights and generators.

Wallnau and Bakker are selling the Trump/Cyrus coin for $45, but charismatic Christian viewers — many of whom identify as evangelical — can also drop $450 on a “13 Trump Cyrus Bundle” that includes 13 sets of the coin, the booklet explaining the connection between Trump and the former Persian king and the DVD of Wallnau conducting a religious service.

The selling of religious objects as “points of contact” for prayer has been a staple of charismatic Christianity.

Recently, Paula White, one of Trump’s strongest evangelical supporters, asked her followers to send her $1,144 in exchange for an anointed prayer cloth. Other preachers have sold crosses, candles and dirt or holy water from Israel as a means of connecting followers with the Holy Spirit.

This blend of spiritual practice and religious hucksterism is often fodder for satire sites such as The Onion or The Babylon Bee. 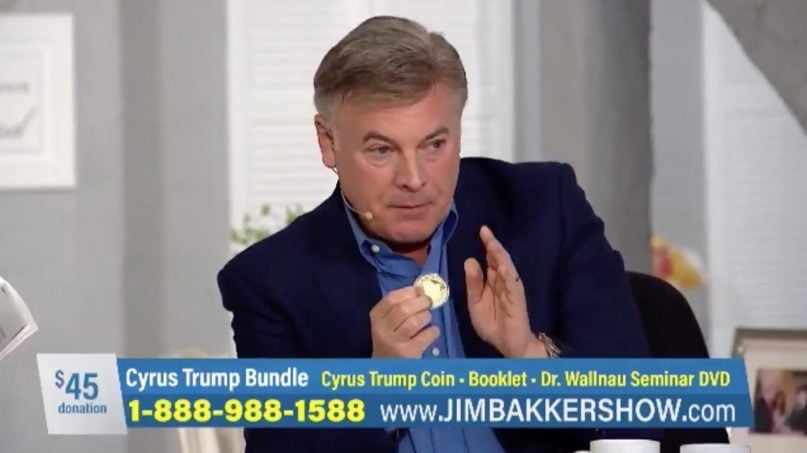 Televangelist Lance Wallnau explains the significance of a gold coin he is selling that features King Cyrus and President Trump on the Jim Bakker Show. Video screenshot

But before we laugh too hard, let’s remember that Wallnau and the people who buy his coins helped elect Trump in 2016.

Wallnau represents Independent Network Charismatic (INC) Christianity. According to scholars Brad Christensen and Richard Flory, who describe the movement in their book “The Rise of Network Christianity,” INC is the fastest-growing Christian movement in both the Western world and the global South.

While INC Christians embrace many of the so-called gifts of the Holy Spirit (tongues-speaking, prophecy, healing, miracles), they do not affiliate with traditional Pentecostal denominations such as the Assemblies of God.

In fact, the INC movement is not a denomination — instead, it is a network of strong spiritual leaders, scattered across the globe, with very large followings. INC leaders believe that a great revival of the Holy Spirit will take place shortly before the Second Coming of Jesus Christ, and God will raise up apostles and prophets to lead this revival.

Wallnau is one of these prophets.

Early in the 2016 presidential campaign, he claimed to receive a word from God: “Donald Trump is a wrecking ball to the spirit of political correctness.”

When Wallnau’s prophecy caught the attention of Trump’s charismatic supporters, he was invited to attend a meeting with the candidate and other evangelical leaders in Trump Tower.

As Wallnau listened to Trump talk about his desire to give evangelicals a more prominent voice in government, he sensed that God was giving him an “assignment” — a “calling related to this guy.”

One day, while he was reading his Facebook page, Wallnau saw a meme predicting that Trump would be the “45th president of the United States.”

God told Wallnau to pick up his Bible and turn to the Old Testament book of Isaiah, chapter 45. On reading the passage, Wallnau realized that, not only would Trump be a “wrecking ball” to political correctness, but he would be elected president of the United States in the spirit of the ancient Persian king Cyrus. 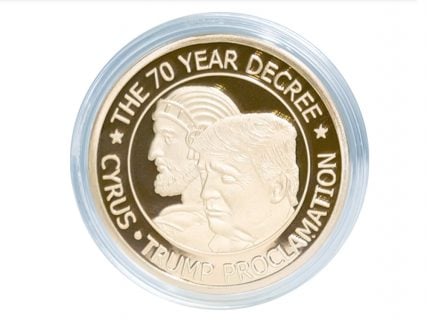 The gold coin of King Cyrus and President Trump being sold by Lance Wallnau and Jim Bakker. Video screenshot

Cyrus was the secular political leader God used to send the exiled kingdom of Judah back to the Promised Land so that they could rebuild the city of Jerusalem and its holy Temple. (Part of this prophecy appears in Isaiah 45.)

Wallnau says he was shocked by this discovery.

“God was messing with my head,” he told Steve Strang, the editor of Charisma, a magazine that covers INC and other Pentecostal and charismatic movements. (Strang claims that his magazine has a circulation of 275,000.)

Wallnau’s prophecy got traction in and out of the INC movement.

Many charismatic Christians — and other evangelicals — view Trump as a new King Cyrus, an unbeliever God will use to deliver them from the secular forces trying to undermine America’s status as a Christian nation.

The INC community believes in the power of prayer.

During the 2016 election, INC prophets led “prayer walks” through seven pivotal swing states. Millions of their followers spent November 8, 2016 fasting and praying for a Trump victory.

If the Trump-Cyrus coin will help them tap into the spiritual power necessary to re-elect God’s anointed one, $45 is a bargain.

(John Fea teaches American history at Messiah College. He is the author of “Believe Me: The Evangelical Road to Donald Trump.” The views expressed in this commentary do not necessarily represent those of Religion News Service.)