NAIROBI, Kenya (RNS) — In North Kivu, an eastern province of Congo, church leaders are stepping up their fight to halt the advance of the 40-month-old Ebola epidemic, even as the Islamic State group increasingly makes its presence felt in the troubled region.

Since August, when Ebola broke out in earnest in the eastern part of the predominantly Christian country, churches and other faith-based organizations have been helping health officials get the word out on prevention methods, producing songs on hygiene and hand-washing for local broadcasts, hosting talks and offering pastoral support for those affected. Most churches have imposed bans on exchanging hand greetings during services.

In Congo, the local church is often the most trusted institution and is a crucial ally in a health crisis in which superstition and rumors are often the enemy.

“We are speaking strongly about it. We are telling our members not to accept any lies and misinformation since disease threatens everyone,” the Rev. Josue’ Bulambo Lembe-Lembe of the Church of Christ in Congo told Religion News Service in a telephone interview.

Complicating the effort to keep Ebola at bay is an array of militant groups and, more recently, the alleged arrival of the Islamic State group, also known as ISIS.

Forced out of its bases in Iraq and Syria, ISIS has moved agressively into Africa and recently described Congo as its Central Africa province of the caliphate. The group claimed responsibility for the killing of six soldiers on April 19 in an attack in Kamango, on the Congo-Uganda border.

“We have heard about the presence of the terrorist group, but it has not been confirmed. As churches we continue to investigate,” said Lembe-Lembe.

Visiting Congo this week (May 20), Francis Kuria Kagema, general secretary of the African Council of Religious Leaders, called the claim of responsibility “probably an empty boast,” but he said that if Islamic State fighters have entered the area, “it will be difficult to dislodge them, as we have seen in Nigeria-Cameroon border, where the heavy forest cover provides a hiding area.”

Church leaders in Congo have been alert to the growing presence of Islamists and the prospect of local youth being radicalized since at least November, when members of the Allied Democratic Forces, an Islamist group with origins in Uganda, killed two Christian pastors and five others in an attack on two villages in northeastern Congo. 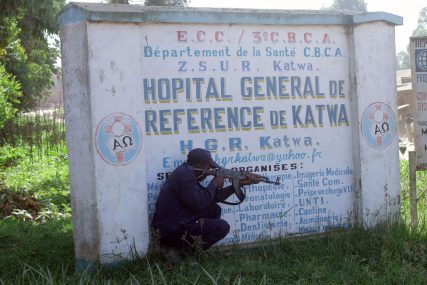 Police shelter behind a sign as they guard a hospital in Butembo, Congo, on April 20, 2019, after militia members attacked an Ebola treatment center in the city’s Katwa district overnight. Violence has deeply complicated efforts to contain what has become the second-deadliest Ebola virus outbreak in history. (AP Photo/Al-Hadji Kudra Maliro)

The group has been accused of carrying out kidnappings, looting churches and burning villages since October 2014, killing 1,000 people, according to a November report by the Congo Research Group at the Center on International Cooperation at New York University.

Though the ADF is not as sophisticated as the Islamic State group, the report says ADF recently received financial support from ISIS through a Kenyan facilitator.

The militants have threatened health teams battling the Ebola epidemic in the region. On April 19, armed men also killed Dr. Richard Valery Mouzoko Kiboung, a World Health Organization epidemiologist working at a hospital in Butembo in North Kivu, which, along with Beni, another trading hub to the north, has become a hot spot for the disease.

“Rebel groups, especially in Butembo area, are proving a major obstacle,” said Lembe-Lembe. “They are preventing the vaccination of children and the movement of health workers.”

Visiting the area after the doctor’s death, WHO Director-General Tedros Adhanom Ghebreyesus pointed to the difficulty of dealing with disease and violence at the same time. “I am profoundly worried about the situation,” he said. “Cases are increasing because of violent acts that set us back each time.”