JERUSALEM (RNS) — In mid-May, one year after the United States relocated its embassy from Tel Aviv to Jerusalem, nearly 200 evangelical Latino leaders from the U.S., Latin America and the Caribbean attended a festive rooftop ceremony in the Old City of Jerusalem.

They were joined by Jewish leaders from Israel and abroad.

Although it was hot enough on that roof to fry an egg, the leaders — dressed in business attire for the occasion — took solace in the heart-stopping view of the Temple Mount a mere 300 feet away.

Below it, the Western Wall was crowded with worshippers.

On a mission organized by the Latino Coalition for Israel, the participants listened intently as speakers described the Jews’ “return to the Land of Israel” and musicians played “The Star-Spangled Banner” and “Hatikva (the Hope),” Israel’s national anthem.

The bilingual English-Spanish mission culminated in a daylong summit attended by U.S. Ambassador to Israel David Friedman. The summit was the latest expression of the American evangelical Latino community’s support for Israel and its warming ties with Diaspora Jewish communities.

As the number of evangelical Christians has swelled within the Latino community in the United States, so too has the community’s support for Israel and Jews around the world. 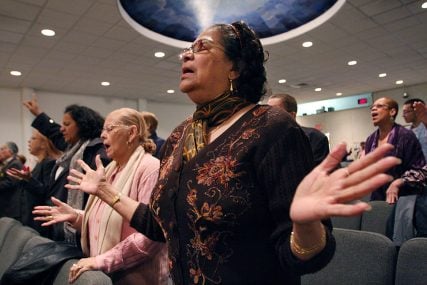 Maria Antonetty, foreground, joins others in a Spanish Easter service at the Primitive Christian Church in New York on April 12, 2009. (AP Photo/Tina Fineberg)

Its leaders believe Israel’s creation is the fulfillment of biblical prophecy and biblical passages that call for blessing the Jewish people.

“It is a miracle to see the return of Israel after 2,000 years of exile and Christian persecution,” said the Rev. Mario Bramnick, LCI’s president, who noted “an unprecedented rise of anti-Semitism” in the U.S.

Like many evangelical Christians, Bramnick, pastor of New Wine Ministries Church in Cooper City, Fla., believes that President Trump’s support of Israel, and especially his decision to bring the U.S. Embassy to Jerusalem, was divinely inspired.

“It is a miracle that God appointed Donald Trump to be a modern Cyrus,” Bramnick said, referring to Cyrus the Great, the first king of the Persian Empire, who in the Hebrew Bible allows Jews to return to Jerusalem from Babylon. Some evangelicals see Trump as a Cyrus-like figure, who comes to the aid of God’s people — even though he is not particularly religious.

Successive Israeli governments have reached out to the Latino community in the hopes of fostering not only trade relations but political support for the Jewish state.

“One of the first things I did was instruct our consulates to hire Hispanics specifically to bring together Israel and the Hispanic community,” Danny Ayalon, Israel’s ambassador to the U.S. from 2002-2006, told Religion News Service. “I realized the great political, economic potential and human potential of the growing Hispanic community in the United States.”

“Hispanic Americans constitute an important population of increasing presence and political strength. As such, they are likely to enjoy leverage in their ability to influence American foreign policy issues, US-Israel relations amongst others,” according to research on Latino attitudes toward Israel at the Interdisciplinary Center Herzliya, an Israeli academic institution.

The researchers found that Latinos who were born in the U.S. and Latinos who are more politically involved are more supportive of Israel than those who are first-generation immigrants and are not involved in the political process.

In Latin America, many nations have been supportive of Israel since its inception in 1948.

“Latin America was the friendliest of continents when Israel was established. We have a lot of common interests, starting with our Judeo-Christian culture and heritage,” Ayalon said.

That heritage sometimes extends to DNA.

With the advent of home genetics testing kits like AncestryDNA and 23andMe, thousands of Latin American Christians have discovered that their ancestors were Jews who fled Spain and Portugal during the Inquisition. If Jewish genealogy sites are any indication, many are exploring their Jewish roots and learning about Israel.

In the U.S., evangelical Latinos are actively fighting against anti-Semitism and the delegitimization of Israel.

LCI worked on pro-Israel and anti-boycott, divestment and sanctions legislation and consulted with Trump administration officials to secure pro-Israel language in the Republican Party platform. The organization provides college students with resources to defend Israel and Jews on campus.

“We’ve worked together on immigration issues, and we have looked at some Homeland Security issues together. It’s a relationship that is growing and very positive,” said Daroff, who is a member of LCI’s advisory board.

On a grassroots level, Ramiro Pena, pastor of Christ the King Church in Waco, Texas, said his congregation makes an effort to educate fellow Christians about the Jewish roots of Christianity and the Jews’ connection to the Land of Israel.

“The best thing is to create awareness and make a public statement against anti-Semitism. This is how we stand with the Jewish people.”

Opinion
William Barr and the politics of death
Martini Judaism
President Trump is a religious leader
News
A blue surprise? As Arizona trends toward Biden, Latino voters stand out
Ahead of the Trend
Study: Multiracial churches growing, but racial unity may be elusive
Spiritual Politics
In a less religious country, Biden gained ground with religious voters