(RNS) — Evangelist Franklin Graham was preaching in Manchester, N.H., last week when he said God put a “burden on his heart” to pray for President Trump, who he thinks is facing increasing pressure from his opponents.

Three days later, Graham, heir to the Billy Graham Evangelistic Association and a vocal defender of the president, posted a call for a “special day of prayer for the president” on Sunday (June 2) asking God to “protect, strengthen, embolden, and direct him.”

Some 250 pastors and leaders of the religious right have responded to Graham’s call, among them a who’s who of Trump’s evangelical base, all pledging to use Sunday morning as an occasion to bless the president.

“Every night all we heard for two years was collusion, collusion, collusion. When the Mueller report came out, instead of moving on to something else, they’re continuing to attack the president,” Graham said, referring to the special investigator’s report. “I’m just burdened for him and his family that God would somehow protect him and get him through this.” 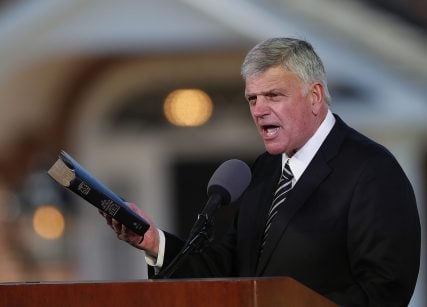 Evangelist Franklin Graham speaks during a funeral service at the Billy Graham Library for his father, the Rev. Billy Graham, on March 2, 2018, in Charlotte, N.C.(AP Photo/John Bazemore)

On Wednesday, Special Counsel Robert Mueller made a public statement, suggesting that Congress might take up his obstruction investigation. That reignited calls from some Democrats to begin impeachment proceedings against the president. House Speaker Nancy Pelosi has resisted calls for impeachment proceedings, but several Democratic presidential candidates have now expressed some support.

Graham said he didn’t envision anything more elaborate than a public prayer, this Sunday, which he said churches, Sunday school classes and individuals can say in their own way.

“We don’t have to ask God to direct him on different policies,” Graham said. “Just pray that God will direct him.”

He insisted there was nothing political in his call for prayer. The website announcement highlights a passage from the New Testament letter from the Apostle Paul to Timothy urging God’s people to pray “for kings and all those in authority.”

Among the signers of Graham’s call are a long list of pastors and televangelists such as Kenneth and Gloria Copeland, John Hagee, Jon and Jolene Hamill, David Jeremiah, Rod Parsley, Bishop Harry Jackson, Greg Laurie and at least three former presidents of the Southern Baptist Convention: Jack Graham, Steve Gaines and Johnny Hunt.

“There’s so much hatred in our political world,” Graham said. “We’ve got to intervene. It’s a tight spiral going down. We need to pray for our nation that God will heal the hearts of the people.”