(RNS) — Starting this month, most visa applicants hoping to travel or immigrate to the U.S. are required to provide five years’ worth of social media identities and other account information in their applications.

The U.S. Department of Homeland Security’s newly expanded social media monitoring policies will directly impact an estimated 15 million prospective visa applicants, but civil rights and legal advocates say the policy will infringe most on the rights of Muslim communities, both in the U.S. and abroad.

“The concern with a policy like this is that it’s targeting a certain population,” said Faiza Patel, director of the liberty and national security program at New York University’s Brennan Center for Justice, which produced a report last month on the effects of the policy.

The social media requirement was originally proposed under the Trump administration’s controversial “extreme vetting” immigration screening policy. Previously, the State Department had said that social media accounts were only required for travelers who had been “determined to warrant additional scrutiny in connection with terrorism or other national security-related visa ineligibilities.”

“The government is disproportionately targeting Muslims, both abroad and in the United States, and is looking for validation of stereotypes that they are terrorists or prone to becoming terrorists,” said Aziz.

Opponents of the measure pointed out that social media is far too broad a tool to be effective in weeding out legitimate threats. No algorithm, experts said, can possibly be nuanced enough to understand slang, cultural norms and innocent exploration of political ideology.

“It’s nearly impossible for machines to be able to interpret social media posts, especially by young people,” Aziz said. “Not only will you have innocent people, disproportionately Muslim, accused of being a security threat because the word ‘bomb’ is misinterpreted as being a literal bomb versus meaning ‘cool,’ but you’re also wasting the government’s resources. They’re just chasing red herrings.”

Instead, the Brennan Center report found that surveillance of social media is likely to lead Muslims to curb their conversations online.

“There’s an overall impact on freedom of religion and freedom of association because people will self-censor what they say online,” said Patel.

In a statement last year after the State Department announced the plan, Hina Shamsi, director of the American Civil Liberty Union’s National Security Project, agreed with that assessment.

The social media review “will infringe on the rights of immigrants and U.S. citizens by chilling freedom of speech and association, particularly because people will now have to wonder if what they say online will be misconstrued or misunderstood by a government official,” Shamsi said. 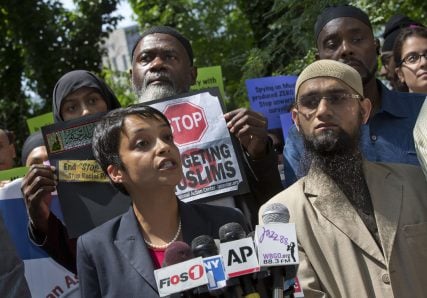 She noted that the policy could be used to “unfairly target immigrants and travelers from Muslim-majority countries for discriminatory visa denials, without doing anything to protect national security.”

U.S. Muslims will likely see a chilling effect on their online activity as well, Patel added, since social media posts of immigrants living in diaspora communities around the country may be picked up in DHS sweeps of relatives and other online contacts looking to come to the U.S.

About 82% of Muslims living in the U.S. are American citizens, including 42% who were born in the country and 40% who were born abroad but who have naturalized, according to a 2017 Pew survey.

Travelers and immigrants from many foreign countries, including some Muslim-majority ones, may be accustomed to censoring themselves online to protect themselves from an authoritarian government, but the new surveillance policy will likely raise U.S. Muslims’ awareness level about what Aziz called the government’s increased adoption of “authoritarian practices.”

The 2017 Pew survey found that 18% of U.S. Muslims say they have been singled out by airport security. The federal government’s secret watchlist system has compounded this profiling, civil rights advocates say, leaving thousands of U.S. citizens on what they say is an overly broad list that burdens innocent travelers.

“Going back to the post-9/11 time to now, there have been consistent complaints from Muslim travelers, including Americans, that when they come into the U.S., they’re often asked about their religious views and their political affiliations,” Patel said. “What mosque they go to, how often they pray, things of that nature.”

That history, combined with the Trump administration’s policies banning travel from several Muslim-majority countries, shows a “clear link to the view that being an observant Muslim somehow suggests that you are a potential terrorist threat,” Patel said. 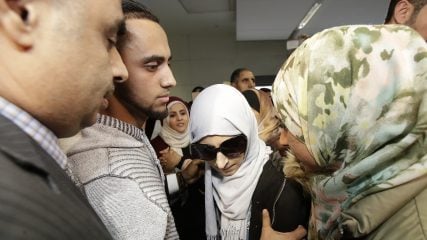 Shaima Swileh, center, stands with her husband, Ali Hassan, second from left, after Swileh arrived at San Francisco International Airport on Dec. 19, 2018. Swileh is the Yemeni mother who won her fight for a waiver from the Trump administration’s travel ban that would allow her to go to California to see her dying 2-year-old son. (AP Photo/Jeff Chiu)

The social media monitoring program, she said, seems to originate from “the same well of bigotry and bias.”

The Brennan Center’s report noted that social media information collected by DHS can be shared with other government, law enforcement and security agencies and that the DHS databases sometimes retain such information for years.