U.S. Mormons still have more children than other Americans do, but their families are not as large as they used to be.

First, let’s look at fertility in previous generations. According to research from the 2016 Next Mormons Survey (NMS), today’s Mormon adults grew up in families of 4.02 children.

This was higher than the national average—and depending on the year, sometimes significantly so. For example, we have LDS and national data from the early 1980s that indicates that when Americans as a whole had a total fertility rate of 1.81 children, Mormons were having an extra kid and a half: a 3.31 fertility rate. Here’s what that looks like: 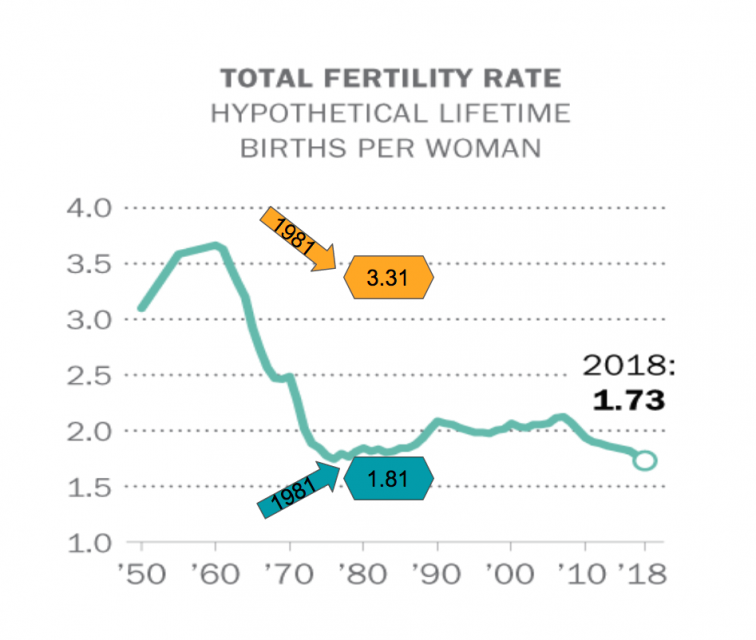 Mormons, it seems, held out past the time other Americans began to routinely use contraception.

Much of this has to do with the unambiguous anti-contraception messages LDS leaders were sending to members even after the Pill had been legalized. In the 1960s and 1970s, LDS leaders still regularly spoke out against birth control. In 1969, for example, the First Presidency counseled church members as follows:

We seriously regret that there should exist a sentiment or feeling among any members of the Church to curtail the birth of their children. We have been commanded to multiply and replenish the earth that we may have joy and rejoicing in our posterity.

Where husband and wife enjoy health and vigor and are free from impurities that would be entailed upon their posterity, it is contrary to the teachings of the Church artificially to curtail or prevent the birth of children. We believe that those who practice birth control will reap disappointment by and by.

If this language sounds unusually formal for the 1960s, that’s because the announcement was based on an earlier—and considerably more incendiary—statement from Pres. Joseph F. Smith in 1917. (1917 was, not coincidentally, the same year that Margaret Sanger launched the Birth Control Review and served a month in prison for opening the nation’s first birth control clinic. Contraception was very much in the news.)

Here’s the Joseph F. quote from a century ago, with the italicized parts being the fiery rhetoric that the First Presidency quietly dropped in the 1969 version:

I regret, I think it is a crying evil, that there should exist a sentiment or a feeling among any members of the Church to curtail the birth of their children. I think that is a crime wherever it occurs, where husband and wife are in possession of health and vigor and are free from impurities that would be entailed upon their posterity. I believe that where people undertake to curtail or prevent the birth of their children that they are going to reap disappointment by and by. I have no hesitancy in saying that I believe that is one of the greatest crimes of the world today, this evil practice.

You can see the evolution here. Even though the 1969 statement is unequivocal in encouraging church members to avoid birth control, leaders have effectively decriminalized the practice compared to the Church’s earlier position. The 1969 statement was also followed by a list of certain allowances: husbands should respect their wives’ limitations and wishes about family size, women’s health should be a primary concern, etc.

Gradually in the 1980s and 1990s, LDS leaders stopped overtly preaching against birth control, even though they still promoted the importance of children. In the 1998 Handbook, contraception is considered to be a matter between the couple and the Lord, and church members are advised not to judge each other about it. (As if.) That don’t-ask-don’t-tell approach has effectively been the Church’s policy for the last 20 years.

Its effect shows up clearly in the data.

The NMS had three questions related to fertility patterns: the aforementioned question about the size of respondents’ families growing up, another about how many children respondents have had themselves, and a third about what they consider to be the “ideal” family size, regardless of how many children they’ve actually had.

From the second question we can see that Mormons are having fewer children than they used to. GenX Latter-day Saints (who were ages 37 to 51 at the time of the 2016 survey and had therefore mostly completed their childbearing) showed a significant drop in family size: 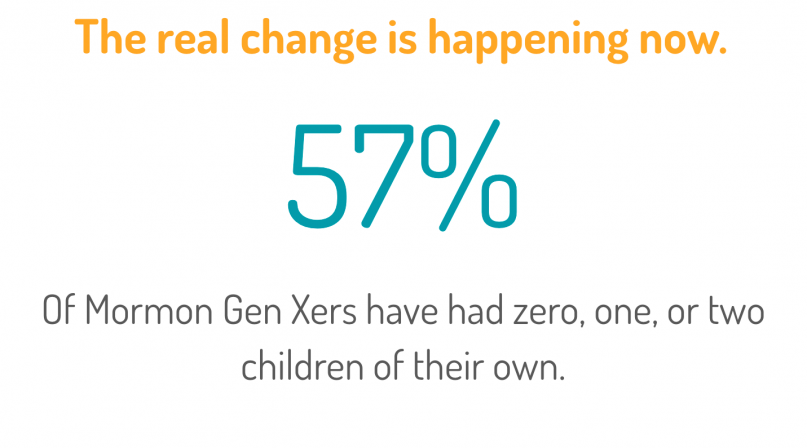 Overall, the median number of children that Mormons had themselves was 2.42, which is still about 7/10 of a child higher than is typical of Americans as a whole, but not nearly as much of a spread as pertained in the early 1980s. (Research on Utah fertility patterns from 1960 to the present confirms much of what we are seeing in the NMS.)

What’s more, on the third question—how many children respondents believe is the “ideal” family size—Mormons’ perfect number was about 3.

There is a gender difference here, in which Mormon women say they want about half a child more than men do (3.4 vs. 2.8). And there is an interesting generational difference, with younger adults more likely to say that zero, one, or two children is ideal (46%) than older ones are (32%).

Bottom line: Mormon families are still larger than the nation’s, but the difference is smaller compared to what it was in the early 1980s. With Church leaders no longer condemning birth control, many American Latter-day Saints appear to be using it. And while they are told not to judge each other in this matter, I’d be willing to bet that somewhere, Joseph F. Smith is rolling in his grave.

Flunking Sainthood
10 years after Elder Packer’s anti-LGBTQ talk, have Mormons turned the corner on gay rights?
Follow us on Facebook!
Submit your photos to RNS