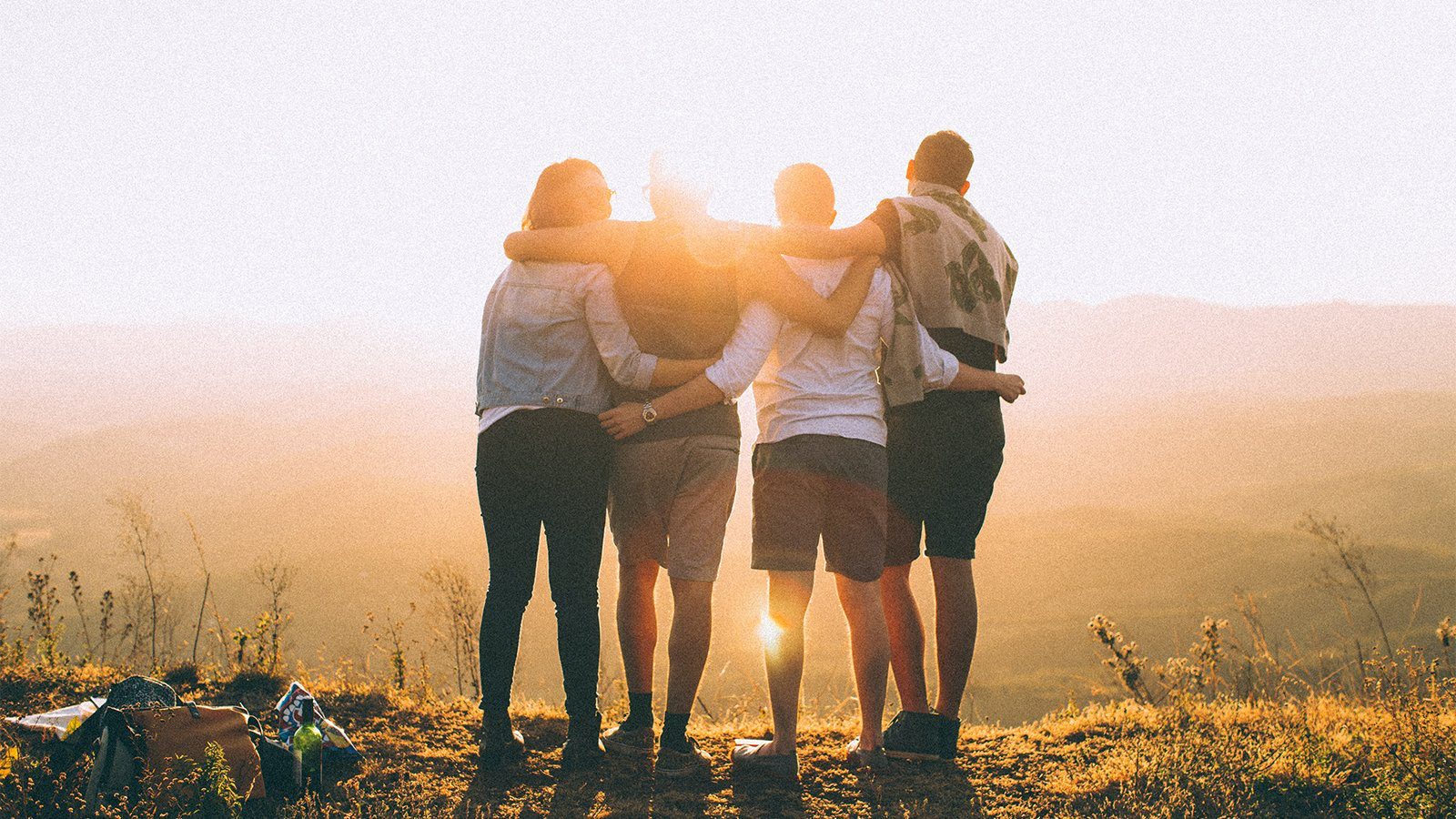 (RNS) — I’ve been greatly encouraged in the past few weeks to see more (and more positive) attention to single members in the Church of Jesus Christ of Latter-day Saints. Here’s hoping that “adult” will now be regarded as the most important word in the phrase “Young Single Adult” in Mormon circles.

The church cannot afford to alienate its single members. According to Elder Gerrit Gong in this month’s General Conference, a majority of church members are now single in some capacity, whether that means they are widowed, divorced, separated or never married.

Take a moment to let that sink in: More than half the adults in the church are not married. That’s been true for the global church for almost 30 years — since 1992, according to Elder Gong — and became true in the United States and Canada as of 2019.

And now, the church is rolling out policy changes and new opportunities for single members, especially men.

Elder Quentin Cook announced at the end of March that single men could begin serving as counselors in bishoprics, on stake high councils and as the presidents of organizations. In preparing to expand the opportunities of singles in the church, he said, “we felt to search carefully for policies and misperceptions that might limit the church service of single members.”

Single women will continue to be able to serve at all levels of leadership in Relief Society, Young Women and Primary.

I’m hoping this is just the beginning. I’ve complained for some time that single members have been marginalized in the church, which has often regarded them as something less than fully baked adults. When I conducted interviews for the chapter on singles in “The Next Mormons,” one of the interviewees summed it up perfectly. Speaking specifically about how single women are viewed as being in a kind of holding pattern, she said:

As a single woman, I don’t know what my role is, or what other ways in which I’m important to the gospel or the building of the community. … With most of the single women, it feels like the church is saying that we’re just biding our time until we get married, and that’s when our “real” lives will begin.

So it’s encouraging to see the church now pushing back against the widespread culture of judgment of its single members. Take a look at the infographic below, which the church released on April 22: 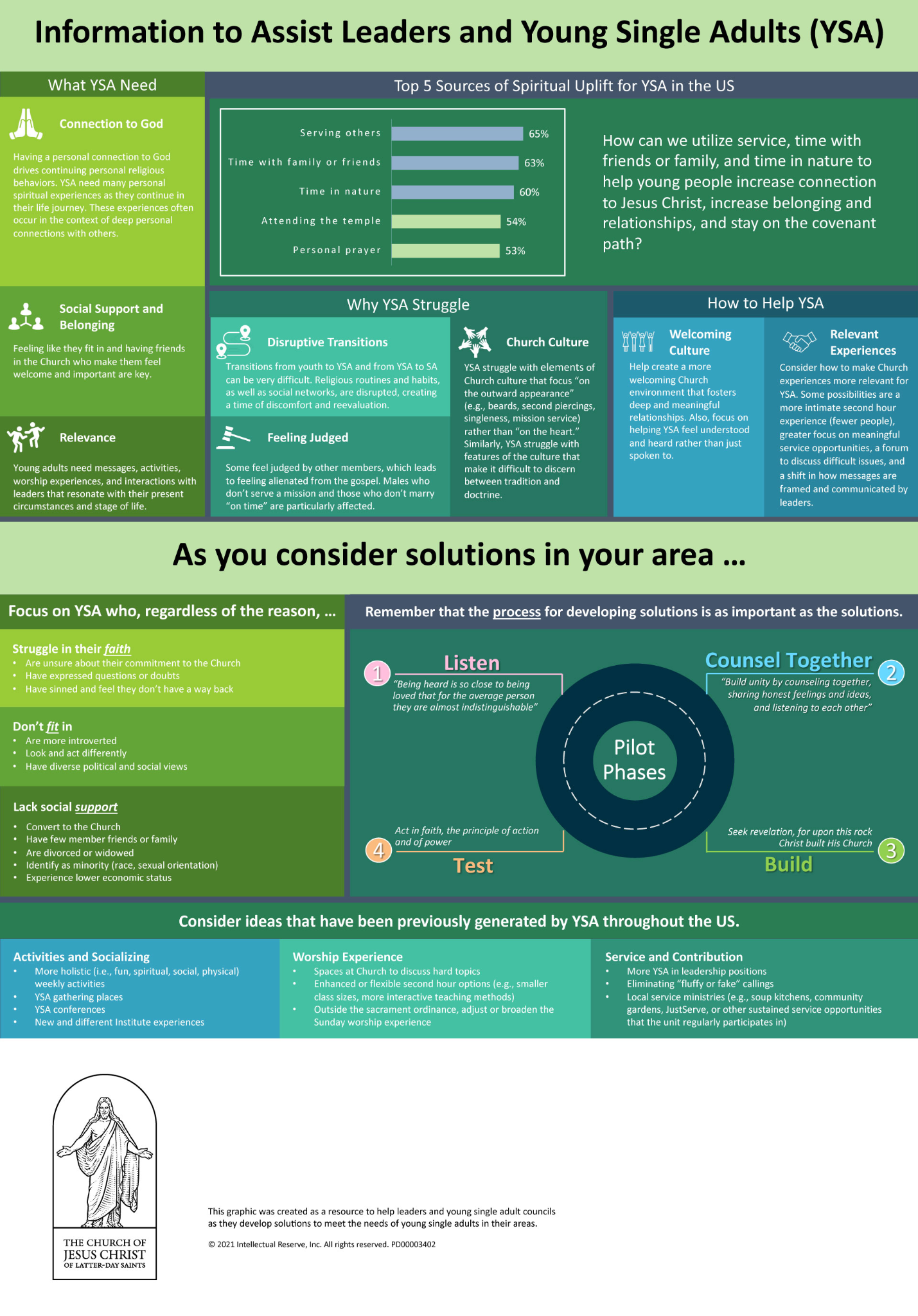 An infographic created by the Church of Jesus Christ of Latter-day Saints to help single members, April 2021. Property of Intellectual Reserve, Inc.

Interesting! What I see here is a stated commitment to listening to the experiences of singles in the church and an understanding that the church is not always an easy place for them to belong. I also see a refreshing openness to possible change, including “new and different” Institute experiences, adjustments to Sunday worship and (most importantly) the need to have “spaces at Church to discuss hard topics.” (Could we have that for married members as well?)

This kind of emphasis is overdue — and also necessary if the church wants to thrive. In 2008, in a closed-door meeting of top LDS leaders that was later leaked to YouTube, the Brethren heard a lot of fascinating and troubling statistics about YSAs around the world. In particular, they learned that YSA’s church activity rates were abysmal.

In 2008, around 30% of YSAs in North America were active in the church, and only 20% internationally. (And given how religious attendance and identification have declined over the last decade, I think the situation may be even worse today than in 2008.) In the video, the presenter told leaders, “What’s interesting about that to us is that … young adults … of the same age who get married are twice as active as singles. So there’s something about being single.”

I’d qualify that to say there’s something about being single in the church. It’s not a culture that makes single people feel at home. It’s not easy to sit on the pews week after week and be made to feel there’s a whole lot wrong with you. (If there weren’t, why, you’d be married already! Or so the assumption goes.) I don’t think I could stand that barrage of negative messages, myself. Single members who stay active in the church year after year should have our mad respect.

So these changes are a promising step forward. In addition to potentially improving activity rates, the church’s olive branch to singles serves a practical purpose. In some parts of the world, there aren’t enough “ideal” members, especially men, to fill all the necessary callings in wards and branches. Extending single men the opportunity to be bishopric counselors and stake high council members can help reduce the load, joining other recent policies (like eliminating Young Men’s presidencies in 2020) that seek to better utilize a small number of Melchizedek priesthood holders.

Our world is changing. The bottom line is that in many nations, fewer people are getting married or are marrying at later ages. According to U.S. Census records through 2019, the median age for marriage in the U.S. has crept up to 30.5 for men and 28.1 for women and shows no sign yet of leveling off. In other parts of the world, first-time brides and grooms are even older. If the church wants to continue to connect with these people, it can’t make a marriage license the price of entry into full fellowship.

In praise of single Mormons

Where do smart, sexy, single Mormon 30-somethings fit into the LDS Church?

Worldwide, only 25% of young single Mormons are active in the LDS Church