WASHINGTON (RNS) — The large historic cross that sits in a Maryland traffic circle is constitutional, the Supreme Court has ruled.

In a 7-2 decision, the high court determined Thursday (June 20) that the World War I monument known as the Bladensburg Cross, erected by the American Legion in 1925, does not violate the Constitution’s establishment clause.

Justice Samuel Alito, writing for the majority, said the cross is a community’s expression of grief for the loss of young soldiers and its removal or “radical alteration” would be viewed as a hostile rather than a neutral act about religion.

“Although the cross has long been a preeminent Christian symbol, its use in the Bladensburg memorial has a special significance,” writes Alito.

“The Religion Clauses of the Constitution aim to foster a society in which people of all beliefs can live together harmoniously, and the presence of the Bladensburg Cross on the land where it has stood for so many years is fully consistent with that aim.”

American Legion National Commander Brett Reistad said in a tweet reacting to the decision that the case was not focused on a religious symbol.

“This was not just about a single cross,” he said. “This was about the right of a community to honor its fallen heroes.”

The American Humanist Association had argued that the 40-foot-tall monument, also known as the Peace Cross, does not belong on government property. Another plaintiff in the case suggested cutting off the cross’s arms to “turn it into a pillar,” moving the cross to private property or removing it altogether.

But Alito rejected those proposals.

“A government that roams the land, tearing down monuments with religious symbolism and scrubbing away any reference to the divine will strike many as aggressively hostile to religion,” he writes. 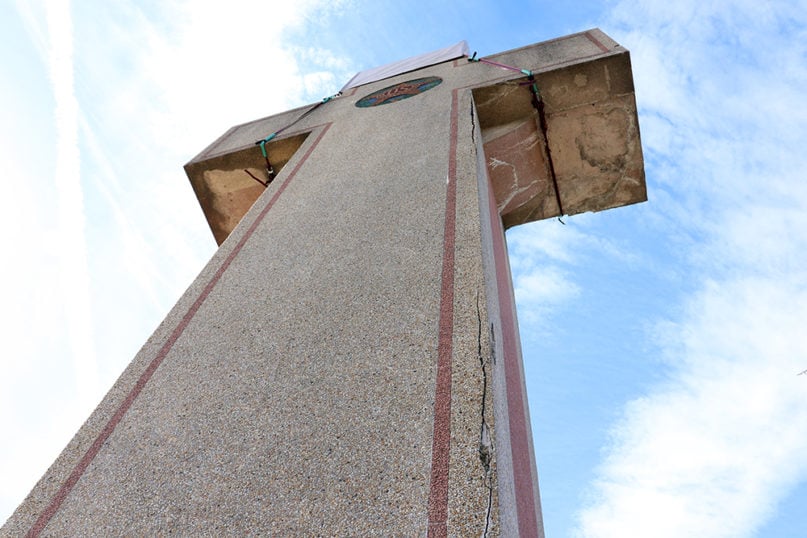 However, he differentiated between retaining such historic symbols and creating new ones: “The passage of time gives rise to a strong presumption of constitutionality.”

In a dissenting opinion, Justice Ruth Bader Ginsburg said that the Maryland-National Capital Park and Planning Commission that maintains the cross is memorializing soldiers in a sectarian way.

“By maintaining the Peace Cross on a public highway, the Commission elevates Christianity over other faiths, and religion over nonreligion,” writes Ginsburg, who was joined by Justice Sonia Sotomayor.

A district court ruled against the humanists in 2015, but the 4th U.S. Circuit Court of Appeals reversed the lower court decision in 2017, saying the cross had “the primary effect of endorsing religion and excessively entangles the government in religion.”

The American Humanist Association noted that Alito’s opinion left in place many other rulings favoring the separation of church and state, and foiled what it said was the other side’s broader agenda.

“After our earlier victory, our opponents took this case to the post-Kennedy Supreme Court hoping for a complete upheaval of the separation of church and state,” said Monica Miller, senior counsel at the American Humanist Association. “Fortunately, the Lemon test and decades of precedent have not been overruled in the vast majority of relevant instances.”

The 1971 Lemon v. Kurtzman case yielded a three-part test the justices have since used to consider whether symbols like the Bladensburg Cross have a secular purpose. The test asks whether a government agency has a secular purpose for the religious symbol, while requiring that it primarily “neither advances nor inhibits” religion nor fosters “an excessive government entanglement with religion.”

But despite the humanist association’s optimism, the Lemon test seemed to be dealt a blow in Thursday’s decision. Alito addressed what he called the Lemon test’s “shortcomings” and cited numerous reasons why its application may not fit this case. Among them are that it may be “especially difficult” to determine the original purpose of historical monuments and that purpose may be obscured by additional reasons for their existence.

“The community may come to value them without necessarily embracing their religious roots,” he wrote.

Alito said communities may choose to retain monuments featuring religious expressions for a variety of reasons, including, in the case of the Bladensburg memorial, concerns of historic preservation and traffic that were argued by the Maryland commission. 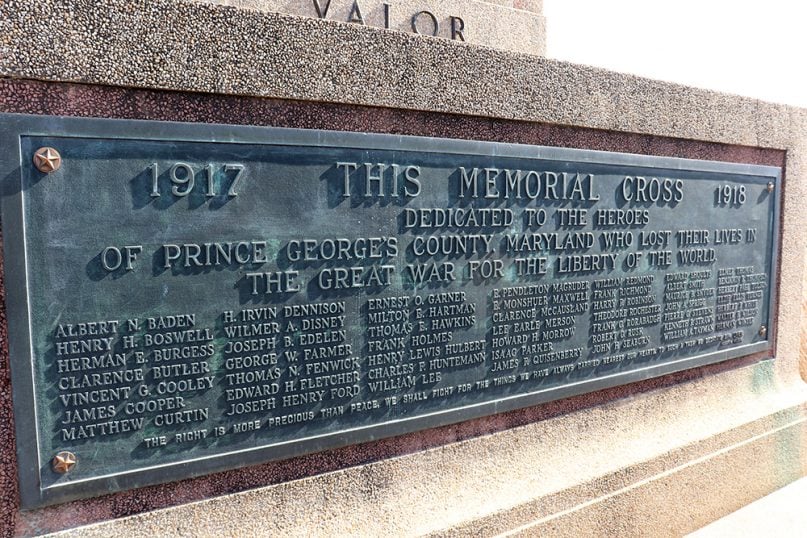 The Bladensburg Peace Cross plaque has the names of soldiers who died during World War I. RNS photo by Adelle M. Banks

Five justices wrote concurring opinions, with some adding criticism of the Lemon test, which they considered inappropriate for this case. Justice Brett Kavanaugh declared it “not good law”; Justice Neil Gorsuch called it “a misadventure”; Justice Clarence Thomas said it should be overruled “in all contexts.”

Despite the criticism of the Lemon test, the ACLU said it appreciated the decision’s limited scope.

“The government’s giant cross in Bladensburg sends an obvious message of religious favoritism, and today’s decision holding otherwise is deeply disappointing,” said Daniel Mach, director of the ACLU Program on Freedom of Religion and Belief. “The silver lining, though, is that the ruling is limited to the unique circumstances of this particular monument and is hardly a free pass for government officials to promote their preferred religious symbols and messages in the future.”

Kavanaugh, the court’s newest justice, also noted in his opinion that the high court ruling “allows” Maryland to maintain the cross but does not mandate that it does. Expressing his respect for Jewish veterans who filed a brief saying the cross “sends a message of exclusion,” Kavanaugh said the state legislature could pass legislation to remove it or transfer the land on which it sits.

Maryland Gov. Larry Hogan, however, said in a tweet that he looks forward to the memorial staying put and continuing to recognize World War I veterans.

“Today’s ruling ensures that this memorial — a dignified tribute to those who came before us and made the ultimate sacrifice — will stand tall and proud for the ages,” he said.