WASHINGTON (RNS) — The rabbi of Pittsburgh’s Tree of Life synagogue, site of an October mass shooting, tries to avoid using the word “hate” and wishes others would do the same.

A Muslim man who lost his wife in the March attack on his New Zealand mosque urges love for every human being.

A Christian woman from Sri Lanka hopes religious leaders will remain compassionate even in the wake of terrorist bombings that killed Christians attending Easter services in the spring.

All three spoke at the opening of the State Department’s second Ministerial to Advance Religious Freedom on Tuesday (July 16). They shared first-person stories of violence against houses of worship — and resilience of survivors — that help fuel the department’s goal to enhance religious liberty across the globe. 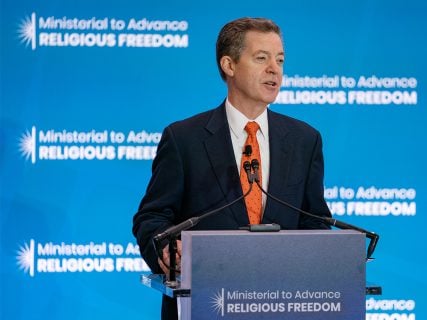 Ambassador-at-large for International Religious Freedom Sam Brownback said the Trump administration wants to ramp up attention to killings and persecution based on religious beliefs and reverse trends that show they are often on the increase in countries across the world.

“Whether Baha’is, Buddhists, Christians, Jews, Muslims, Zoroastrians or others — and there are many other faiths represented here — or no faith at all, people from every religion and belief experience persecution somewhere and often it’s deadly,” Brownback said in opening remarks.

“Yet, if all the faiths stand together in agreement for one another, I’m convinced we can change the world. Deaths would go down, imprisonments would decline, freedom of worship would flourish.”

Secretary of State Mike Pompeo said more than 1,000 people, including more than 100 foreign delegations, were invited to the gathering, an increase from some 80 delegations last year. In a brief welcome, he called fighting for freedom of belief “a moral imperative” and “not optional.”

Leaders from three Abrahamic faiths shared their own stories of experiencing religious violence in the past year. 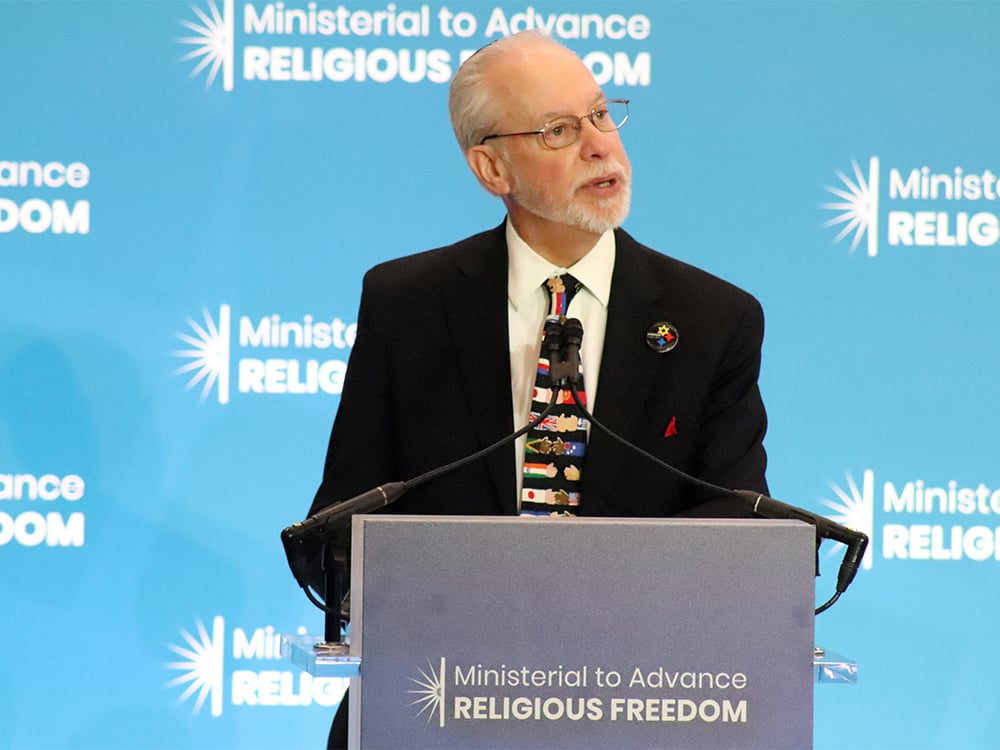 Rabbi Jeffrey Myers addresses the Ministerial to Advance Religious Freedom at the U.S. Department of State in Washington on July 16, 2019. RNS photo by Adelle M. Banks

Rabbi Jeffrey Myers of Tree of Life,  a synagogue in Pittsburgh where a gunman opened fire last fall, spoke of parents coping with children now afraid to attend services and a congregant who has been unable to set foot in any synagogue since the attack on Oct. 27.

“The perpetrator of the massacre in the Tree of Life not only stole 11 beautiful lives that he had no God-given right to do, but he stole the faith of countless Jews,” Myers told an auditorium filled with people in religious attire that ranged from robes to collars to hijabs.

“But, lest I offer only testimony of doom and gloom in Pittsburgh, you also need to know that not only has my faith grown stronger but so too has the faith of so very many.” 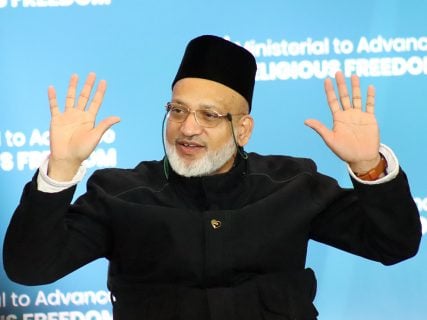 Farid Ahmed addresses the Ministerial to Advance Religious Freedom at the U.S. Department of State in Washington on July 16, 2019. RNS photo by Adelle M. Banks

Myers was followed by Farid Ahmed, a survivor of an attack on his mosque in Christchurch, New Zealand. He emotionally recalled having to go home after the March 15 mass shooting and tell his daughter that her mother would no longer be there with them. But he said he nevertheless forgave the killer.

Yamini Ravindran, the advocacy coordinator with the National Christian Evangelical Alliance of Sri Lanka, described the long-term effects of the Easter Sunday shootings at churches and hotels in Sri Lanka.

“Dealing with the trauma of the victims is the biggest challenge because some of their lives have changed permanently,” Ravindran said. “Some will never be able to walk or have eyesight or do anything on their own.”

Speaking later to reporters as a representative of the Christians attacked in Sri Lanka, Ravindran added that she hopes governments can work together to not only respond to religious violence but prevent it. 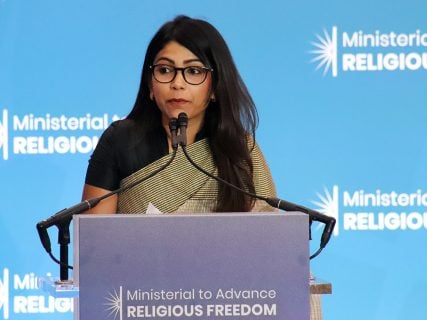 Yamini Ravindran addresses the Ministerial to Advance Religious Freedom at the U.S. Department of State in Washington on July 16, 2019. RNS photo by Adelle M. Banks

“Can we equip each other and provide capacity to build something like that so that we don’t only respond when bad things happen, but we actually prevent bad things from happening?” said Ravindran, whose organization has worked to reduce stigmatization of Muslims.

Brownback noted during a panel discussion with U.N., European Union and Norway officials that a new Pew Research Center study shows that government restrictions on religion have increased markedly between 2007 and 2017. Panelists discussed how everything from bridge-building to social media can be used to counter religious persecution by governmental and nongovernmental actors.

The civil society and religious leaders attending the first day of the three-day event also heard from a representative of Yazidis, a religious minority pushed out of northern Iraq by the Islamic State group, who said, “The Yazidi community wants to return home.”

Jay Kansara, director of government relations for the Hindu American Foundation, said in an interview just before the ministerial started that he hopes the ministerial and the administration will continue to recognize the range of religious minorities, including Hindus, across the globe.

“The concerns of Dharmic faiths are equally important and should be important to the United States State Department,” he said. “This is one of those areas that we’re going to continue to hope for improvement.” 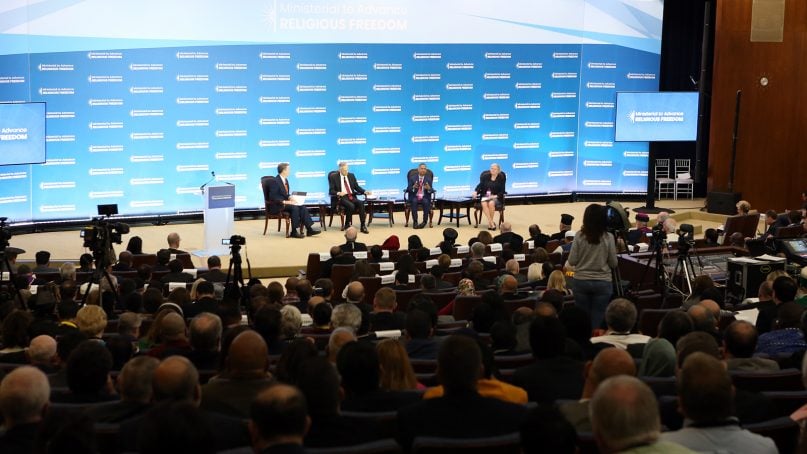 A panel discussion during the Ministerial to Advance Religious Freedom at the U.S. Department of State in Washington on July 16, 2019. Photo by State Department/Public Domain