(RNS) — The Catholic nuns who occupied a revered place of awe and fear in my childhood psyche never talked about the the holy tradition of civil disobedience. But these resolute women, who seemed much more concerned with instilling respect for authority, also taught me about justice. Perhaps unwittingly they planted the subversive seed in my head that troublemaking is part of being a disciple of Jesus.

I thought about those long-ago teachers last week when I joined hundreds of Catholic sisters, clergy and lay Catholic advocates on Capitol Hill to raise a collective voice against the inhumane detention of immigrant children on the border.

Inside the rotunda of the Russell Senate Office Building, we prayed the rosary, sang and held images of young children who have died in federal custody. And then we refused to leave. Capitol Police pulled out bullhorns and warned us to disperse. Seventy of us were led out in handcuffs. “We have to put our bodies where our mouths are,” a 90-year-old sister who traveled from Chicago for the action told me earlier that morning.

What will history books say about Christians in the Trump era? White evangelical leaders who claim to be pro-life have become flatterers and courtiers, crass apologists for a man whose demeaning rhetoric and dehumanizing policies betray the gospel. 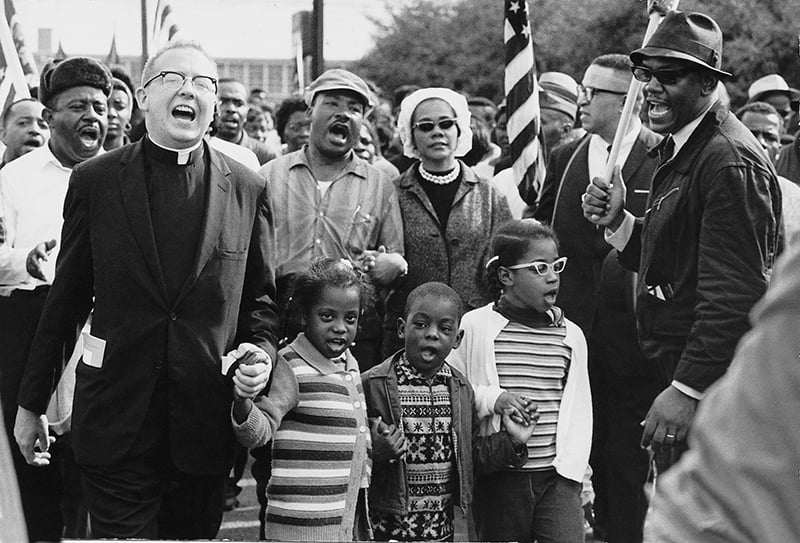 The Rev. Ralph David Abernathy follows the Rev. Martin Luther King Jr. and Coretta Scott King as the Abernathy children march on the front line, leading the Selma to Montgomery march in 1965. The name of the white minister in the photo is unknown. Photo courtesy of Abernathy Family/Creative Commons

I refuse to be one of those white Christians who either cheerleads for this administration’s institutionalized cruelty, or a Christian who conveniently turns away from the moral stench. At a time when President Trump doubles down on nativism and racism, white Christians have a particular responsibility to challenge his abuse of power. Silence is complicity.

Writing from a Birmingham jail, the Rev. Martin Luther King Jr. lamented those Christians who “remained silent behind the anesthetizing security of stained glass windows.” He also spoke to white Christians in ways that remain as relevant today as they were decades ago when he warned about the “white moderate, who is more devoted to order than to justice.”

As a Catholic, I have centuries of social justice teachings at my disposal, but if this remains merely words on a page, I haven’t embraced what Pope Francis calls a “church on the streets” that stands in solidarity with those on the peripheries.

Catholic bishops and other religious leaders have issued many denunciations of the Trump administration’s anti-immigrant policies. But the urgent moral crisis at our border and in communities that live in terror across the country requires an escalated moral response. Statements and prayers are not enough when immigrant kids are in cages, and the president deliberately stokes racial resentment by telling women of color in Congress to “go back” to the “crime infested places from which they came.” This July 25, 1973, file photo shows the Rev. Daniel Berrigan, right, and others participating in a fast and vigil on the steps of St. Patrick’s Cathedral in New York City to protest the bombing in Cambodia. (AP Photo/Ron Frehm)

We need a revival of religious civil disobedience. Along with Mohandas Gandhi and King, Catholics can look back to the prophetic activism of Catholic Worker founder Dorothy Day, the farmworker organizer Cesar Chavez and the Jesuit priest Daniel Berrigan, who burned draft files in protest of the Vietnam War.

There are ancient roots to what some might call radical Christian witness. Writing in the 13th century, Thomas Aquinas argued that there are situations in which opposing the civil authority is a moral duty. The catechism of the Catholic Church cites Aquinas on unjust laws in its treatment of Catholics’ responsibility to participate in social life. “If rulers were to enact unjust laws or take measures contrary to the moral order,” the catechism reads, “such arrangements would not be binding in conscience.”

The U.S. Catholic bishops’ 1993 statement titled "The Harvest of Justice Is Sown in Peace" specifically cites the right to participate in civil disobedience as part of a commitment to “resist manifest injustice and public evil with means other than force.”

Being a faithful Christian sometimes means breaking the rules. Moral disruption is a sacred act when the status quo is sinful.

Christians follow a Messiah who had dark skin and who preached liberation to those on the margins of a powerful empire. Two millennia later, we face a stark choice between moral resistance and the cowardice of complicity. History will judge that decision. 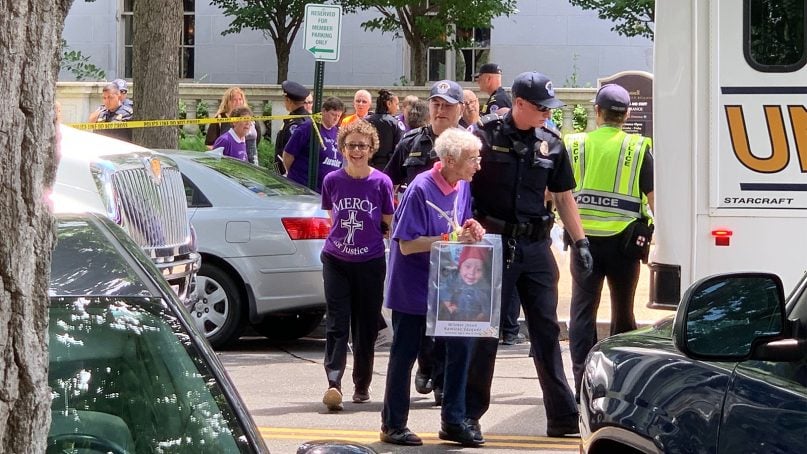 (John Gehring is Catholic program director at Faith in Public Life and author of “The Francis Effect: A Radical Pope’s Challenge to the American Catholic Church.” The views in this commentary do not necessarily represent those of Religion News Service.)