WASHINGTON (RNS) — Police arrested dozens of protestors, including many Roman Catholic nuns, at a rally Thursday (July 18) opposing the Trump administration’s treatment of immigrant children along the Southern border, treatment that organizers of the demonstration said amounted to atrocities.

Officials with the advocacy groups Faith in Public Life and Faith in Action reported that 70 people were arrested after hundreds of demonstrators who had gathered on the lawn of the U.S. Capitol to sing hymns and wave signs with slogans such as “Everyone is sacred” and “Honor the Children: End child detention” crossed the street to enter the Russell Senate Office Building’s rotunda.

Some of the demonstrators stopped to lie down on the rotunda floor in the shape of a cross. They chanted the Hail Mary prayer several times while holding images of what organizers said were immigrant children who have died in U.S. custody.

Capitol police eventually began arresting demonstrators, among them Jesuit brothers and nuns from orders such as the Sisters of Mercy. The group recited the Lord’s Prayer as members were led away to buses waiting outside, leaving images of children scattered across the rotunda floor.

As officers escorted the handcuffed demonstrators into the buses, observers on the sidewalk burst into applause. 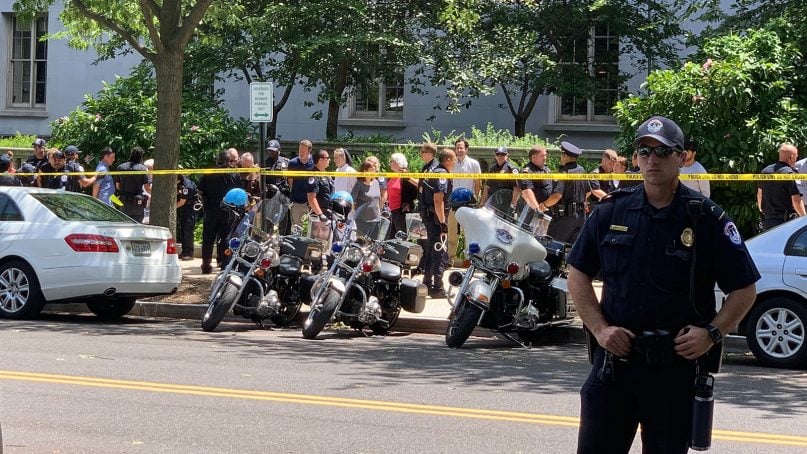 Dozens of Roman Catholic protestors are lined up to arrest at the U.S. Capitol on July 18, 2019. RNS photo by Jack Jenkins

Kelsey Herbert, campaigns manager for Faith in Public life, said the group was there to denounce the detention of children at the border as well as other immigration policies.

“The unsanitary conditions, the separation of families — all that needs to stop,” said Herbert, who worked with other groups such as Faith in Action to plan the protest. “Congress needs to stop funding these atrocities, and the administration needs to stop implementing the policies.”

Herbert added, “It is part of the Catholic tradition and the faith to be resisting.”

Faith organizations have been some of the most persistent critics of the Trump administration’s immigration policies. Religious groups from across the theological spectrum condemned both the travel ban instituted early in the president’s first term and the separation of immigrant families along the U.S.-Mexico border.

Catholics, with their long service to migrants in the border region, have been especially critical of President Trump’s rhetoric and policies regarding immigrants. In 2018, a bishop suggested implementing “canonical penalties” for government workers who helped enforce the family separation policy, and earlier this week the U.S. Conference of Catholic Bishops issued a statement condemning the administration’s new rules that make it more difficult for immigrants to apply for asylum status in the United States.

Hundreds of Catholics also staged a protest on Capitol Hill in 2018 to highlight the plight of “Dreamers,” or immigrants who were granted protection during the Obama administration through the Deferred Action for Childhood Arrivals program.