(RNS) — A recent opinion piece by Thomas Reese, “The Eucharist is about more than Christ becoming present,” states that Pew Research Center has “an impoverished idea of what the Eucharist is really all about.”

The center’s understanding is that the belief that the Eucharist is really the body and blood of Christ is central to the Catholic faith. As such, we sought to measure what U.S. Catholics believe on the subject.

In a recent survey measuring religious knowledge among U.S. adults, we included a question to that effect and worded it in such a way that it could be understood and appropriately answered by a broad swath of lay people.

The question did not include complex theological terms like “transubstantiation” or “real presence.” Instead, it simply asked respondents to indicate what they believe happens to the bread and wine used for Communion at Catholic Mass, regardless of the official teaching of the Catholic Church; do they believe the bread and wine “actually become the body and blood of Jesus Christ,” or are they “symbols of the body and blood of Jesus Christ.” 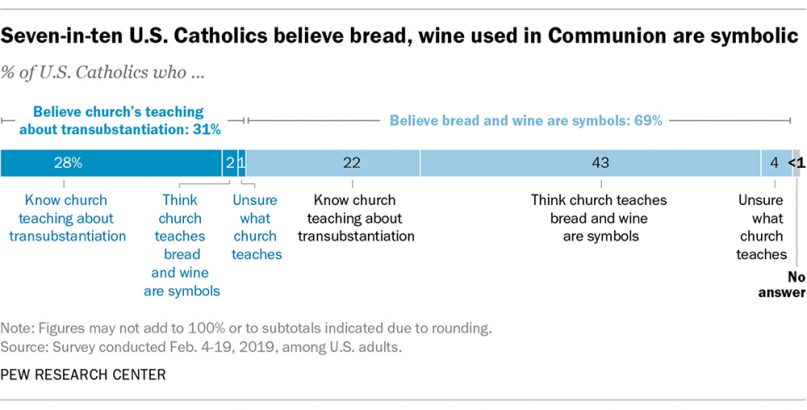 Other surveys estimate that a much higher share of Catholics believe the bread and wine become the body and blood of Christ. However, the questions in those surveys are very different from the question in the new Pew Research Center survey.

For example, one such question asked Catholics whether they believe that the bread and wine really become the body and blood of Christ; they could say “yes” or “no” but were not presented with an alternative idea about the Eucharist to which they could assent — they were not given the option to say they believe it is symbolic. Other such questions have presented Catholics with a paired set of alternatives to choose from (as in Pew Research Center’s survey) but used significantly different phrasing for the “symbols” option (e.g., “Jesus Christ is really present in the bread and wine of the Eucharist” vs. “Bread and wine are symbols of Jesus, but Jesus is not really present”).

These differences in question wording and structure mean that the results of the new survey are not directly comparable to previous studies and, thus, should not be used to estimate how Catholics’ beliefs about the Eucharist may have changed over time.

Along these lines, other Pew Research Center surveys have asked Catholics what they find important to the practice of their faith, and what is more peripheral (or not important at all).

Still, while there is much more that could be asked of Catholics about the Eucharist, and many different ways that could be employed to explore Catholics’ beliefs on the subject, we think the basic question used in the new Pew Research Center survey is informative. It sheds light on what share of Catholics believe that the bread and wine “actually become the body and blood of Christ” and, as such, is important for understanding the current state of American Catholicism.

(Gregory A. Smith is the associate director of research at Pew Research Center. The views expressed in this commentary do not necessarily reflect those of Religion News Service.) News
Poll: Nearly half of Americans think the US should be a Christian nation
Follow us on Facebook!
Submit your photos to RNS