(RNS) — The Rev. Lenny Duncan is not your typical Evangelical Lutheran Church in America minister.

Duncan is the black pastor of a mostly Afro-Caribbean congregation in one of the nation’s least diverse denominations. He recently decided to challenge that denomination — the Evangelical Lutheran Church in America — in a new book titled “Dear Church: A Love Letter from a Black Preacher to the Whitest Denomination in the U.S.”

Duncan, 41, talked to Religion News Service about why he is confronting his 94% white denomination, how churches can overcome the notion that they are dying, and what he has in common with Dylann Roof, a Lutheran man convicted of killing nine people at Mother Emanuel African Methodist Episcopal Church in Charleston, South Carolina. 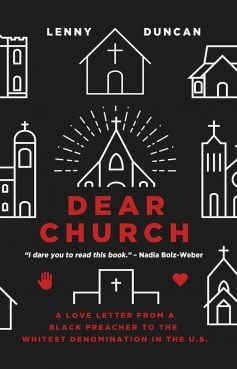 Why did you decide to write this book, “Dear Church,” and why did you choose to use the form of a letter to your denomination?

I grew up in an abusive home. And one of the first times I ever tried to defend my mom, I was about five years old and I stood over her body and I tried to block the blows that my father was raining down on her. That’s what “Dear Church” feels like for me. It’s an attempt of self-defense of the church that I love.

You called the ELCA to work toward dismantling white supremacy within it. And you said the first step is a national confession. Do you think the “Declaration of the ELCA to People of African Descent” that was delivered earlier this month accomplished that?

When we’re talking about dismantling the structures of systemic racism, there’s repentance and eventually there’s reconciliation, but there has to be reparations in the middle. There have to be constructive, quantifiable actions that show that you’ve turned around. So, while I think it’s a good start, I certainly don’t think the job’s anywhere near done.

The issue of reparations is often tied to money. But you seem to think of them in other terms. What are other ways you think reparations are necessary within your denomination or others?

It is time for all straight white males in the Evangelical Lutheran Church in America to remove their names from ballots for bishop. It’s the same thing when we come to some of the positions that we see in our churchwide organization — to just self-select their way out. This comes from my experience at seminary and other places. As someone who shows up as a cis male, if I’m quiet long enough typically a female or femme in the room will say the same thing I was gonna say much more succinctly and probably more intelligently than I would.

Are you also talking about the curriculum in seminaries?

Yeah. Most of the time whenever a person of color voice is added to the curriculum — even if we talk about James Cone; lots of times professors suggested I read Dr. Cone’s work — but it’s always the extra book or the recommended reading.

Some people are going to think that your ideas are progressive or even radical. Do you think that people, especially white males in your denomination, would actually willingly leave their names off ballots for bishop? 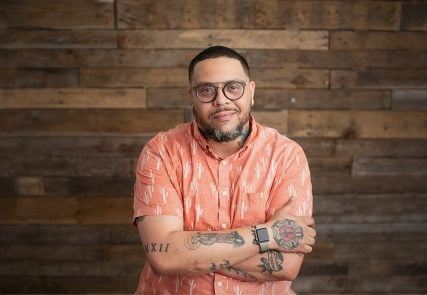 You note that Dylann Roof and you are both part of the ELCA. What does that mean to you and what should the church learn from that?

The reality is that Dylann was only a few decisions away from being me or I was only a few decisions away from being Dylann. Neither of us were nurtured and supported when we were younger, and it’s really by the grace of God that I didn’t end up in a similar situation as Dylann. For me, the struggle has been not to make Dylann Roof into a monster or into a demon or into a boogeyman but as someone who could be sitting in the pews of any ELCA church right now and is just waiting for a good word to push that person in the right direction or a lack thereof, because power abhors a vacuum, and then be pushed in the same direction Dylann was.

I try to parallel our histories in a way that makes it more real for folks so that folks can see that this is important work that should be done now, particularly in areas where there isn’t a lot of diversity, to make sure something like Charleston never happens again.

You talk about the power of symbols and liturgy and say the white garments worn by seminarians and clergy are problematic. Why?

What’s the color for Easter? White. How is Christ depicted in most of our liturgical art that’s inside our sanctuaries? White. This is particularly a problem in the American context because whiteness and white supremacy is so embedded in our culture that we start relating white as good and dark as bad.

You see the story in Advent, this whole idea of darkness to light.

How we tell the story is just as important as the story we’re telling. The tools that we use and the symbols that we use have long-term, often detrimental, effects to the children sitting in our pews. When I was in seminary someone said to me, “I’m not going to let a blip in Christian history ruin white robes for me.” And what I replied to them is, “Your people didn’t get their a– kicked by that blip in Christian history. So it’s easy for you to get past it.”

You described yourself and the church as queer, but you say less than 10% of ELCA congregations have labeled themselves as LGBTQ-affirming. Do you foresee any change in this issue that has divided the ELCA and many other denominations?

I think more and more people are starting to realize that queer Christians have been a part of the Christian experience since the very beginning. Often, we will hear people talk about (the biblical story of) the Ethiopian eunuch. The truth is, queer folks are in every church and every denomination and there’s no avoiding it. So the real issue is, is your God big enough, is your Jesus big enough? Is your church big enough to open up the gates of grace wider for other people?

There are instances where church sanctuaries can hold 300 but only have 20 in the pews each week, you noted. But you also say at one point in your book that the church is not dying. Why do you think that it’s not dying?

For me it’s about who is encountering Jesus and having their life transformed and how a whole community is being transformed by a Jesus who is trying to liberate them from their circumstances, either spiritually, physically, economically, socially. A lot of times, even at 4,000 people inside a building, that doesn’t mean any of that s— is happening.