Brittany Maynard, who was diagnosed with brain cancer at 29, moved from California to Oregon, where physician assisted suicide was legal, dying there because California forbade the practice.
August 29, 2019
Thomas Reese

(RNS) — Everyone reading this column will die one day. We just don’t know when. But contemporary medical technology is increasingly forcing us to think about how.

Many people believe that Catholic theology requires prolonging life as long as possible, but this is not true. Since the 16th century, Catholic moralists have taught that one does not have to use “extraordinary means” to prolong the life of a person who is dying.

In addition, according to Pius XII and John Paul II, there is nothing wrong with using drugs to eliminate the pain of a dying person “even when the result is decreased consciousness and a shortening of life.”

“The duty to preserve life is not absolute, for we may reject life-prolonging procedures that are insufficiently beneficial or excessively burdensome,” the U.S. Catholic bishops wrote in their “Ethical and Religious Directives for Catholic Health Care Services” in 2018.

What the church opposes is euthanasia (the direct killing of a patient) or assisted suicide. That opposition was reiterated this week in Seattle, when an article by The Associated Press told the story of Robert Fuller, who in May used Washington state's "death with dignity" laws to end his own life. Photos showing Fuller receiving a special blessing at the Sunday Mass before his suicide forced Seattle Archbishop J. Peter Sartain to clarify that the parish leadership had not known that Fuller intended to kill himself.

Assisted suicide was legalized in Oregon in 1994 and will be legal in nine states by the end of this year. With over half of Americans believing that doctor-assisted suicide is morally acceptable, this number will increase.

Much of the impetus for this movement is the fear of prolonged suffering prior to death now that medical technology can prolong dying.

Another fear is that prolonging death will lead to huge medical expenses that will bankrupt the dying person’s family. Parents who had hoped to leave a small inheritance to their children find it quickly wiped out by medical expenses.

Those supporting assisted suicide tout it as a free choice made by rational people. In reality, people requesting suicide may be suffering from depression or inadequate pain medication. There is also danger of coercion from people who do not want to bear the expense of caring for the dying. Assisted suicide would certainly reduce the costs to insurance companies and to government programs like Medicare and Medicaid.

So the question becomes: How free are these decisions?

From the Christian perspective, the dying period is a time for love, compassion and reconciliation. People should not be cast aside simply because they can no longer contribute to the economy. They should be cared for with love, respect and dignity.

But this does not mean prolonging life through extraordinary means.

According to the "Caring for People at the End of Life" by the Catholic Health Association, “What distinguishes ‘ordinary’ from ‘extraordinary’ in Catholic moral theology is not whether the treatment is ‘ordinary’ in the sense of being normal or frequently used, but rather whether the treatment is beneficial (ordinary) or excessively burdensome (extraordinary) to the patient.” Does “a particular medical intervention or procedure offer a reasonable hope of benefit to the patient that is not excessively burdensome”?

Pope Pius XII noted that what is “ordinary” can vary “according to circumstances of persons, places, times, and culture.”

Thus, in the 18th century, St. Alphonsus Liguori wrote, “There is no obligation to use an uncommon or costly medicine; there is no need to change one’s place of residence to move to a healthier climate; no one is held to employ a difficult means such as an amputation in order to preserve life; abhorrence of a treatment can render it extraordinary, in the moral sense.”

In 1980, the Vatican “Declaration on Euthanasia” stated, “one cannot impose on anyone the obligation to have recourse to a technique which is already in use but which carries a risk or is burdensome.” 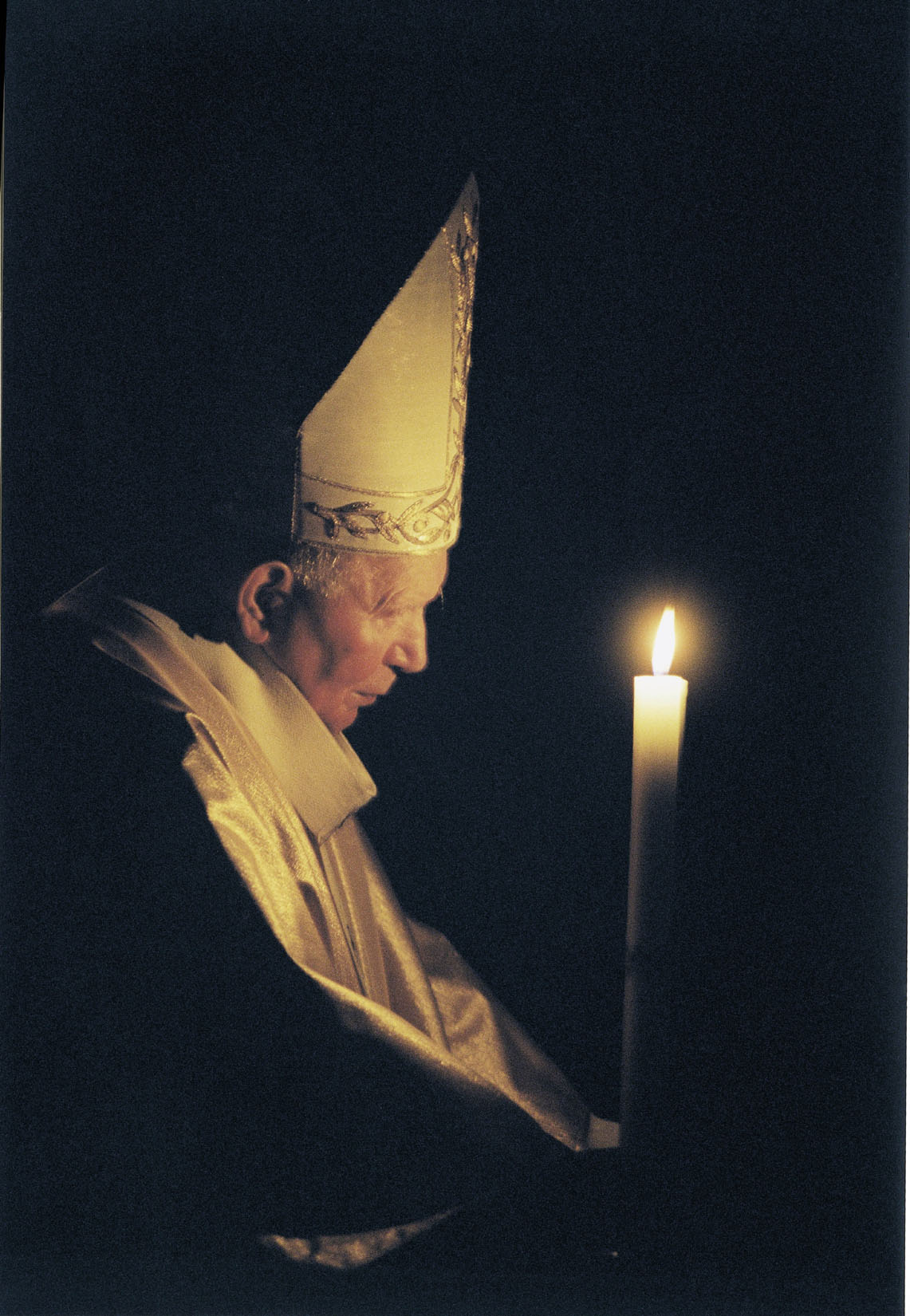 Likewise, in the 1995 “Gospel of Life,” John Paul II wrote: “It needs to be determined whether the means of treatment available are objectively proportionate to the prospects for improvement. To forego extraordinary or disproportionate means is not the equivalent of suicide or euthanasia; it rather expresses acceptance of the human condition in the face of death.”

John Paul acted on his beliefs by leaving the hospital and going home to die when there was no prospect for improvement.

“Especially at the beginning of an illness a variety of medical interventions are appropriate,” concludes the Catholic Health Association. “However, there comes a time with serious advanced illness when continued attempts at a cure are no longer of benefit to the patient. This acknowledgement is not abandoning the patient but rather acknowledging the human condition and the limits of medicine.”

CHA notes, for example, that many forms of chemotherapy would be considered ordinary medical care for cancer patients. “For a particular cancer patient, however, especially at the late stages of cancer, that same treatment may become ‘extraordinary means’ because it can no longer benefit the patient and causes a great deal of discomfort and pain.”

Likewise, food and water are ordinary means when they help the body sustain life. But, the CHA says, “When the body is no longer able to process food and water or when their use becomes too burdensome for the patient, using artificial nutrition and hydration becomes a disproportionate way to preserve life and is therefore morally optional.”

In weighing the burden of treatment for the dying, CHA recommends considering the pain inflicted, the costs incurred, the effort required of the patient and whether there is a severe dread or repugnance toward the treatment.

The legal, ethical and medical issues surrounding death are forcing us to think about how we want to die, even if talking about it makes us uncomfortable.

Death was hard to ignore in pre-modern societies because people died at home surrounded by their families. Even children saw death as a common experience.

The first hospitals, founded by monasteries, were hospices for those whose families could not care for them. Few people expected to leave these hospitals alive. Death was usually quick. Doctors, through ignorance, were more likely to speed people to their deaths than save them. But the monks and sisters cared for the dying, making them as comfortable as possible and consoling them with promises of God’s compassion and love.

Today we see death all the time in television dramas, but we tend to leave real death to professionals in hospitals and nursing homes.

As a result, when confronted with our own deaths or that of a family member, we are often unprepared to deal with the complexity of decisions that may face us, especially with the use of medical technology to prolong life.

Legal, ethical and medical experts advise people to prepare for serious illness and death by signing advance directives and choosing a person to have power of attorney for health care decisions.

Advance directives instruct doctors what medical treatments to use or withhold under a variety of circumstances. The power of attorney for health care appoints someone to make medical decisions for you if you are unconscious or incapacitated.

The legal requirements for these may vary by state so it is important to get forms that work in the state where you live. You need to make sure that your family, doctors and hospital have copies of these documents on file before they are needed.

It is also important to have a conversation with your family, as well as the person you designate with power of attorney, about your desires. There is nothing worse than a family fight in a hospital room over what to do with mother when she is sick and dying. Such fights can be avoided if people make their desires clear to their relatives before they get sick. Initiating such a conversation with an elderly relative requires diplomacy, but the sooner it is done the better.

Thinking about dying is an ancient spiritual exercise epitomized by the Latin phrase “Memento mori,” “Remember you will die.” We need to face the inevitability of death and plan accordingly.