(RNS) — The Rev. Robert Jeffress, pastor of First Baptist Church in Dallas, has made himself into a cable news celebrity by denouncing Democrats as “godless” and “liberal” and hailing President Trump as the best friend for people of faith.

While Democrats have embraced the so-called nones — those with no religious affiliation — the party seems to have gone out of its way to drop the word “liberal.” Twenty Democratic presidential primary candidates debated in June for a total of four hours. They also debated for another four hours in late July.

The number of times that any of those candidates (or the moderators) used the word “liberal”: just once.

Kirsten Gillibrand, who has since dropped out of the race, made the only mention: “We don’t need a liberal or progressive with big ideas or we don’t need a moderate who can win back Trump-Obama voters. You need someone who can do both. And that’s who I am.”

Dumping the world “liberal” may be a good decision — especially as Democrats try to woo the swing-state religious voters who played a key role in the 2016 presidential election.

The word “liberal” has become taboo for many religious Americans, at least according to data from the General Social Survey dating back to 1974.

While over 40% of nonwhite weekly church attenders identified as liberal in the 1970s, that has now dropped to just 28%.

The decline for the most devout white Americans is more dramatic. While 21.6% of them were liberals in 1974, today it’s just 12.7%, according to the GSS. 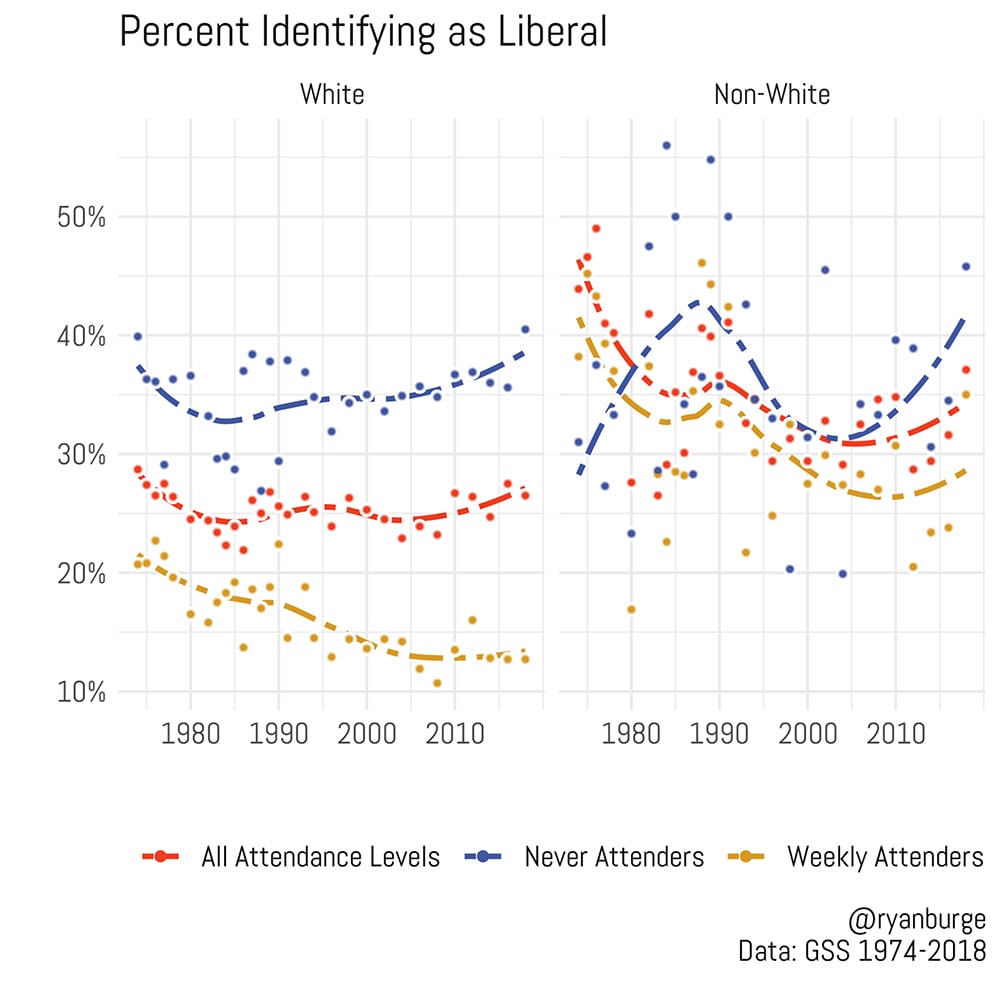 Among those who never attend worship services, the word “liberal” retains some appeal.

About 4 in 10 white Americans who never attend services described themselves as liberal, a percentage that has remained stable since the 1970s.

Using data from 2018, I analyzed political ideology for whites, blacks, Hispanics and Asians at six attendance levels, ranging from never attending to attendance that was multiple times a week “In general, how would you describe your own political viewpoint?” Graphic by Ryan Burge

Among those who attend more than once a week, few identify themselves as liberal.

That includes about a third (31.8%) of African American frequent churchgoers, and about 1 in 10 of Asian American (9.9%) and white (8%) churchgoers. Slightly more Hispanic Americans (11.8%) who attend more than once a week say they are liberal.

By contrast, over three-quarters (77.1%) of white Americans who indicate that they attend church multiple times a week say that they are conservative. Or said another way, for every liberal white person who attends church frequently, there are nine conservatives.

Among all Americans who never attend services, about half identify as liberal, according to the CCES.

While many religious Americans have dropped the liberal label, they haven’t abandoned the Democratic Party. The party’s members include many black Protestants, one of the most devout religious groups in the United States, as well as Hispanic Catholics, Jews, Muslims and other religious Americans. In other words, if you went to a church on a random Sunday morning in 1974 and grabbed 20 white parishioners, 11 would have been Democrats. Today, four would be Democrats. And those Democrats would outnumber the politically liberal churchgoers 2-to-1.

This result adds to a chorus of other findings that paint a bleak picture for any Democratic candidates who want to portray themselves as both religiously devout and politically liberal.

An unashamed embrace of the “liberal” label just does not activate any significant part of the electorate. It may turn off many people who call themselves ideologically and theologically moderate. In reality, it seems like the word “liberal” is radioactive to people of faith.

Instead, a devout Democrat would likely find more traction by positioning his or her faith as sensible and pragmatic to left-leaning audiences.

Discussions about how to care for people whom Jesus called the “least of these” or how often the Bible implores people to “welcome the stranger” may be an effective way of reminding moderate Christians that their faith tradition used to be politically diverse. It also seems unlikely that this approach would turn off the left-leaning religious nones.

Democrats do themselves no favors by ignoring people of faith, specifically the 60% of Americans who still identify as Christians. Instead, a concerted effort to convince potential voters that it’s possible to be a follower of Jesus and not a Republican may begin to unload some of the baggage that Christians have placed on the term “liberal.”