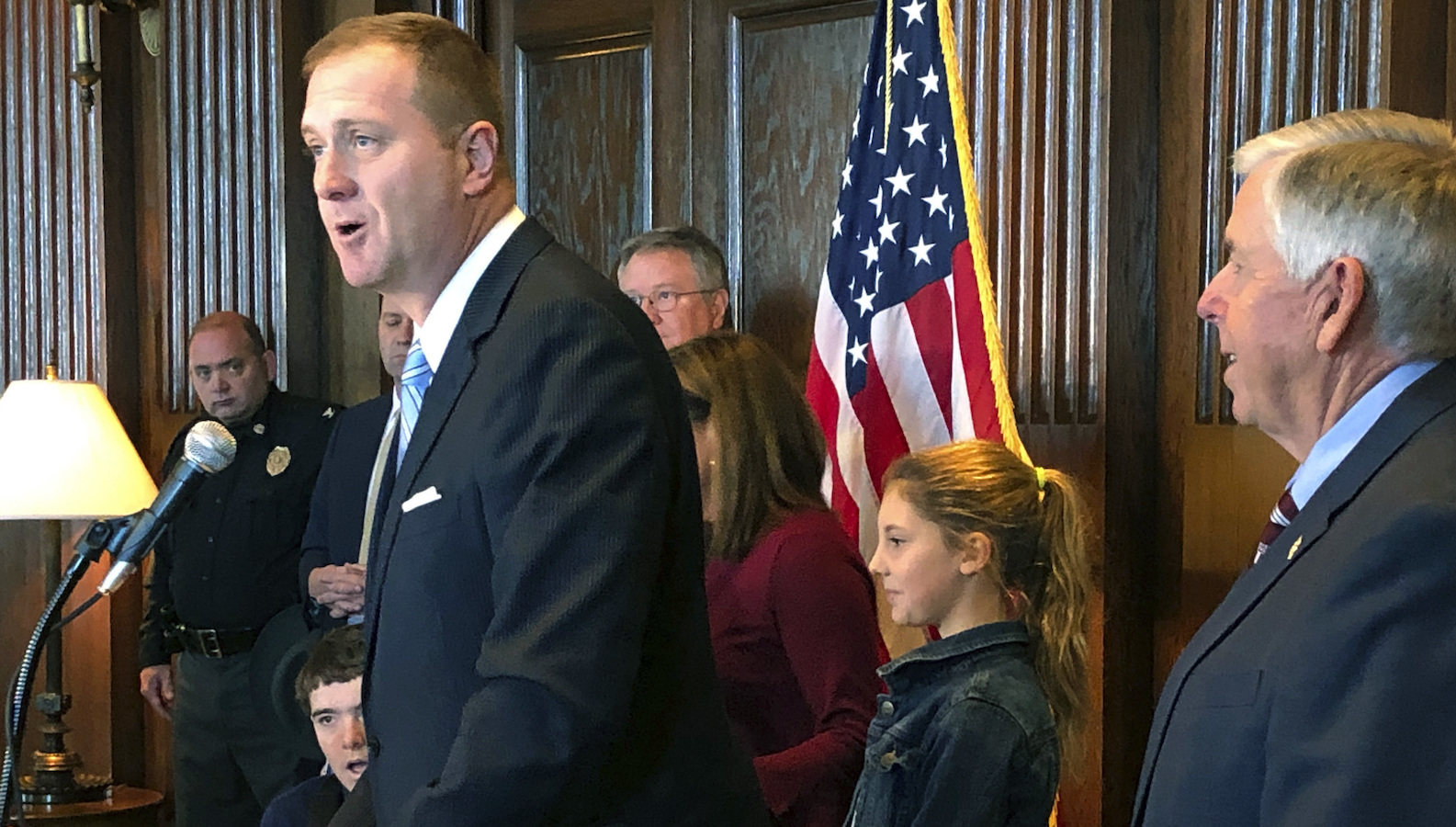 Missouri Treasurer Eric Schmitt speaks to reporters after being announced as the next attorney general at a press conference Tuesday, Nov. 18, 2018, at the state Capitol in Jefferson City, Missouri. Gov. Mike Parson said he is appointing Schmitt to take over for Attorney General Josh Hawley, who won election Nov. 6 to the U.S. Senate. (AP Photo/David A. Lieb)
September 13, 2019
Jim Salter

Schmitt released details of a 13-month investigation of religious leaders within the Archdiocese of St. Louis and the dioceses of Kansas City-St. Joseph, Springfield-Cape Girardeau and Jefferson City.

Missouri is among several states that launched investigations last year after a Pennsylvania report cited abuse of more than 1,000 children by hundreds of priests there since the 1940s, and efforts by church leaders to hide it.

The Missouri investigation began in August 2018 under then-Attorney General Josh Hawley. Hawley was elected to the U.S. Senate in November, and Schmitt, a fellow Republican, took over the investigation after he was appointed to replace him.

Schmitt said the 12 referrals are the most by any state attorney general since the Pennsylvania report.

"The betrayal of trust and of innocence is devastating and in many instances incomprehensible," Schmitt, himself a Catholic, said at a news conference in St. Louis.

The investigation reviewed personnel records for every priest serving in Missouri dating to 1945 — more than 2,000 priests and 300 deacons, seminarians and religious women, Schmitt said.

Investigators also spoke to abuse survivors and their relatives who contacted the attorney general's office.

Investigators found 163 priests or clergy members accused of sexual abuse or misconduct against minors. Eighty-three have died. Of the 80 still alive, the statute of limitations has run out on 46 of the crimes, Schmitt said.

One case is still under open investigation by the Catholic Church. Schmitt said 16 cases have been previously referred for local prosecution and five cases have been or are being investigated by prosecutors, leaving the 12 potential cases Schmitt is referring for prosecution.

Schmitt said his office didn't consider recommending charges against anyone in the church hierarchy because the focus was on the "perpetrators of the crimes." David Clohessy of the Survivors Network of those Abused by Priests called that decision "tragic."

Clohessy, of St. Louis, also said Schmitt should have released more details about the alleged crimes and where they occurred.

"Even without naming individual names, he could still provide much more helpful information than he has," Clohessy said.

Diocese of Kansas City-St. Joseph spokesman Jack Smith said officials believe one of the 12 priests is from that diocese, and they've already contacted the Jackson County prosecutor to offer any assistance. He said the diocese hopes the investigation helps "lift some of the darkness in our past" and brings a sense of justice and healing to victims.

Jefferson City Bishop Shawn McKnight of the Diocese of Jefferson City said in a statement he hopes the report helps achieve greater accountability and transparency, and helps restore trust in the church.

A spokeswoman for the Diocese of Springfield-Cape Girardeau said officials had not seen the report and declined comment.

"In August of 2018, when I invited the Attorney General's office to investigate all allegations of sexual abuse of minors, we promised full cooperation and unfettered access to the archdiocese's records. Following that investigation, and today's report, the Archdiocese of St. Louis remains committed to working with authorities, to bringing healing to victims and their families, and to ensuring a safe environment for all of our children," Carlson said in a statement.

Schmitt's office also provided recommendations to the Catholic Church. They included assuming greater responsibility and oversight of religious order priests and those visiting from other dioceses; developing independent review boards composed entirely of lay people; and being more open when a priest is removed from the ministry.

Schmitt said the clergy abuse hotline will remain open and he encouraged any additional abuse victims to come forward.

The St. Louis investigation released in July found 61 clergy with what the archdiocese called "substantiated" allegations of sexual abuse of children. Thirty-four of the priests are deceased.

The archdiocese said all of the living priests have been removed from the ministry. The list separately named three additional priests accused of possessing child pornography.

The Kansas City-St. Joseph Diocese released its report last week, citing 19 clerics, none of them currently serving. Thirteen have died, two have been removed from ministry, and four have been removed from ministry. One of the laicized clerics, Shawn Ratigan, is serving 50 years in federal prison on a 2013 conviction for producing or attempting to produce child pornography.