Over the summer in a social media group, a woman commented that most ex-Mormons leave the faith because they have read the CES letter, begun exploring the underside of their religion’s history, and become convinced that the Church of Jesus Christ of Latter-day Saints isn’t true.

I responded that statistically, such people are actually in the minority. Most people who leave the Church do so when they are quite young; the median age for leaving in the Next Mormons research, for example, was just 19. The CES-letter model of the temple-married returned missionary who leaves the faith later in adulthood is rare, and the one that does so primarily because of church history is even rarer. (The other major group, statistically, is converts who disappear after spending a fairly short time in the Church, usually just a year or two.)

“Nope,” she insisted. I was quite wrong, and she knew I was wrong because she was part of several huge ex-Mormon Facebook groups where one disaffiliate after another shared the same basic story. Also, she had read a different study that confirmed that conflict over church history is why people leave, SO THERE.

What followed was a discussion in which I and several other members tried to educate her about the difference between a nationally representative sample like the NMS and a “snowball sample” that is generated via social media affinity groups like the ones she is a part of online. Snowball samples are skewed by nature of the way they are spread among people who hear about them because they are already interested in that topic or point of view.

It did not go well, and she seemed to take it personally that her experience was not universal. That discussion has stayed on my mind, and it helped inform an experiment I just did online in preparation for the follow-up book Benjamin Knoll and I are writing about former Mormons.

In order to find interviewees for the personal stories of this second book, I created a Google Form and asked people to share it. I made it clear that this was not the basis of any quantitative data that would be used in the research, merely an attempt to broaden the potential pool of interviewees for the qualitative portion.

My underlying other hope, though, was to understand some of the segmentation in the former Mormon community. So for that purpose only I’m going to compare what we learned about the social media ex-Mormons who participated in this brief Google questionnaire (which we’re calling the Former Mormon Snowball Sample, or FMSS) compared to national academic studies.

My Google Form produced 1,499 applicants to be interviewed, an embarrassment of riches in terms of quantity. Only a minority, however, fit the profile of what we know about former Mormons nationally, based on the NMS’s 540 respondents and the 225 who were in Pew’s random 2014 Religious Landscape Study. Those studies are smaller in number but far more reliable and generalizable than my Google Form. Here are four key differences.

First, the ex-Mormons who found out about the Google Form via social media are overwhelmingly white—95%, in fact, compared to 83% in the NMS and 81% in Pew’s RLS. Ex-Mormons who spend time in ex-Mormon affinity groups, then, are less racially diverse than former Mormons are as a whole. It’s not an enormous difference, but it’s there.

Second, they are astonishingly well-educated. Pew found in 2014 that only 13% of former Mormons had completed college, and that 8% had gone on to obtain an advanced degree, meaning that 21% had at least a college degree.

In the snowball sample on Google Forms, this was 70%. Seven in ten people in the FMSS had at least a college degree: 36% were at least college graduates, and another 34% had obtained a postgraduate degree (either academic of professional).

So when my Facebook interlocutor was going on about how many people in her affinity groups cared about church history and the CES letter, I’ve a feeling she was correct. Her mistake was in assuming that the information obtained in those social media groups was generalizable to all former Mormons.

A third major difference is in how they feel about God now. In the NMS, two-thirds of former Mormons agreed that they either “know God really exists and . . . have no doubts about it” or they “have doubts” but “do believe in God.” Pew, likewise, found that 71% of its sample of former Mormons said they were either “absolutely certain” that God exists (50%) or “fairly certain” (21%).

That is not at all true of the social media subset of ex-Mormons. Only 18% of them fit into those two categories of belief in God. For them, the top two categories of the six options provided were agnosticism (32%) and atheism (22%). They’re also less likely than former Mormons are as a rule to get involved in another religion after leaving the LDS Church. They seem to be quite done with religion. 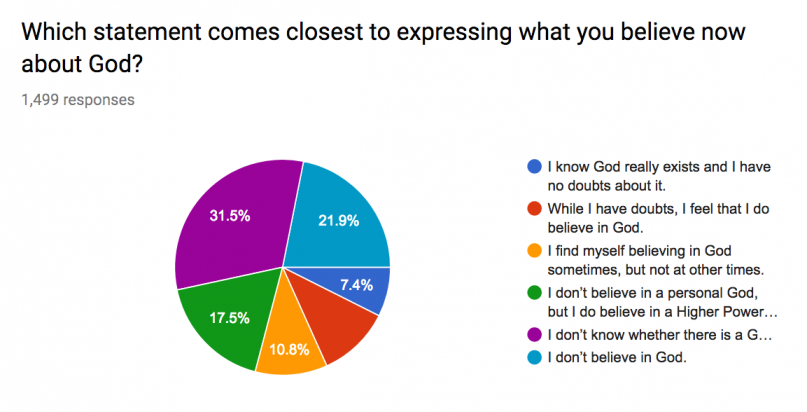 This extends to a fourth difference, which is that perhaps the social media ex-Mormons have rejected religion so thoroughly because they, unlike most people in the general samples, were so much more involved in Mormonism at one time. Seven in ten were born in the covenant to parents who were sealed in the temple. Only one in ten was a convert.

They also stayed Mormon longer. In the representative NMS data, only about a fifth of respondents were older than 25 when they left. This is typical of religious disaffiliation generally, whether we’re talking about Mormons or Catholics or evangelicals. It tends to cluster in the late teens and early 20s.

But in the FMSS group, only about a fifth were not older than 25, the exact opposite of the national sample. The social media Mormons left later, often after receiving their endowments in the temple (81.5%, compared to 40% of former Mormons nationally) or serving a mission (45% vs. 13%). More than 9 in 10 of the social media ex-Mormons report that they were “very active” in the Church before leaving it. 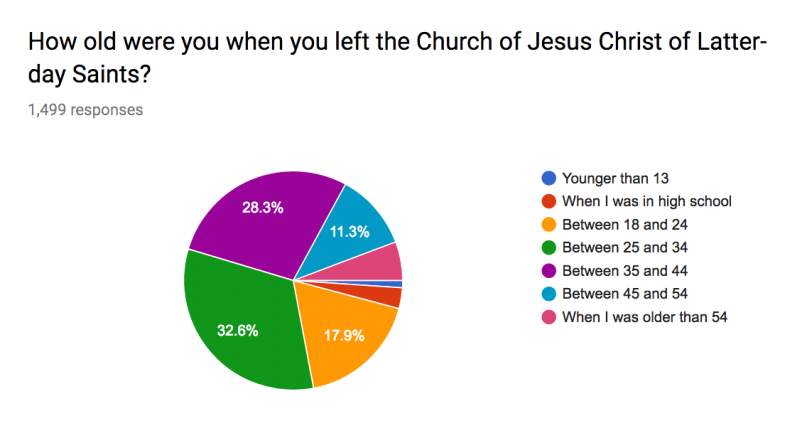 The long and the short of this is that racially, religiously, and educationally, the statistically small subset of former Mormons who are now involved in ex-Mormon social media groups are not representative of former Mormons as a whole.

That does not mean the minority group’s experiences and concerns are insignificant, however, which I tried (and apparently failed) to convey on Facebook.

If anything, they are more important. These were people who were fully committed to the Church at one time. If more than 80% got their temple endowments, that means that at least 80% were paying tithing, keeping the Word of Wisdom, attending Sunday meetings, and holding callings. And now they are not. This group is smaller, as I’ve shown, but it is vocal and, I would argue, growing. (It will take years of longitudinal data to establish by how much.)

People abandoning religion in their late teens or early 20s because it just “didn’t fit” into their adult lives are nothing new. Converts who come and go are nothing new. Those two groups are definitely still the statistical majority among former Mormons, but the “social media ex-Mormons” are not to be discounted, either.

With research contributed by Benjamin Knoll.