Courtesy of the Church of Jesus Christ of Latter-day Saints.

Kymberly Mellen wasn’t sure whether she wanted to take the part of Sariah in the Book of Mormon videos being produced by the Church of Jesus Christ of Latter-day Saints.

The audition material she’d been given depicted a Sariah who was a stronger and more developed character than simply “Lehi’s wife” in the early chapters of the Book of Mormon. Mellen, a professional actor for three decades who currently teaches acting at the University of Nevada Las Vegas, was intrigued enough to put her hat in the ring.

But in answer to the question “Why do you want to play Sariah?” she responded that she wasn’t fully certain yet if she did want the part. 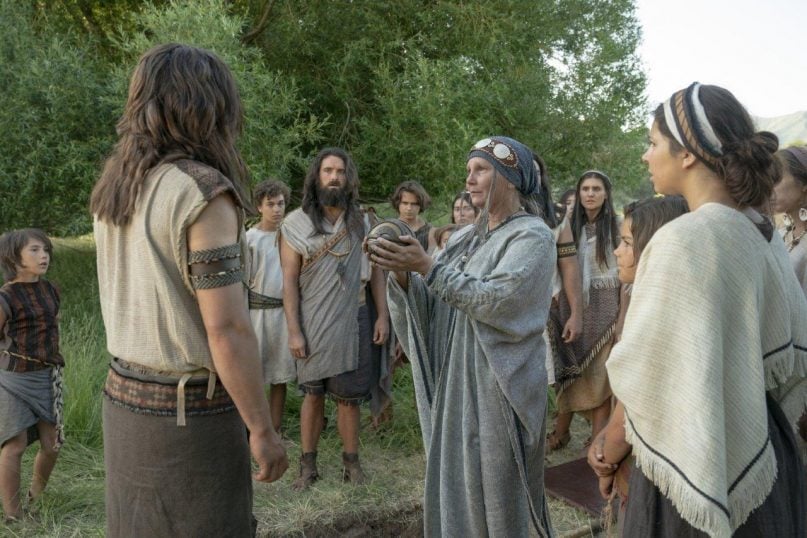 Sariah mediating within her family. Courtesy of the Church of Jesus Christ of Latter-day Saints.

“I’m interested in playing a woman who is strong, who is a prophetess in her home, who advocates for all of her children,” she wrote in her application. And the early audition script seemed to promise that kind of strength. “But if you just want someone to do the laundry, nod their head in agreement, and stay in the background, I’m probably not the actress for this part.”

Mellen’s candid response speaks to some of the challenges the Church is facing as it attempts to bring the Book of Mormon to life through video. Film and video have overtaken reading as the preferred method of learning for many younger people, especially since the Book of Mormon’s formal, King James-esque language can often be difficult to understand.

As well, many modern readers don’t quite know what to do with a book that is more than 500 pages long but has only six named women (Sariah, Abish and Isabel in the Book of Mormon’s own narrative, plus Eve, Sarah and Mary from the Bible). Of the three named female characters that are unique to the Book of Mormon, only two speak any words at all.

Mellen got the part of Sariah, and says she was impressed that every episode had at least one woman writer on the team. The final script seemed to be a healthy compromise between two different visions of how to depict Mormonism’s founding scripture.

One school of thought, she suspects, was to have “a bunch of talking heads saying the exact same things that are in the actual scriptures, and nothing more.” There was a fear that any invented dialogue might be be overstepping the mark. “And then there was another whole school that was like, ‘Are you kidding? It’s 2017, and we’re trying to reach an audience that doesn’t respond to that kind of stilted storytelling. We need to catch them emotionally so that they will then go back and read the scriptures and get some of the doctrine.’”

She has not seen the entire finished product, but what she has viewed appears to be a blend of both ideals. “It’s not just stagnant footage with talking heads. The scriptures are quoted directly, but additional dialogue has been imagined by the writers and enhanced by the actors.”

The Book of Mormon videos are an impressive undertaking, with approximately thirty installments to be released over time, each ranging in length from about two minutes to 26 minutes. Producer Aaron Merrell says the videos are divided into four “seasons” of material, with the first season’s episodes to air each week through the end of 2019. (See a schedule here.)

The pilot episode, which features Sariah, Lehi, and their sons as they depart Jerusalem about 600 years before Christ, was released last week and is available on YouTube, on the Church’s website, and in the church’s library app. Merrell says the team just wrapped the shooting for Season 3, which should be available by the time the Church reaches that portion of the Book of Mormon (Mosiah and Alma) in its worldwide curriculum in 2020. Season 4’s release is still to be determined.

The filming involved hundreds of extras and crew members, various shooting locations in Utah and the Oregon coast, work with green screens, and some intense special effects, such as a storm at sea.

Merrell says the team was keen to showcase women in the Book of Mormon. “We do just have a historical text to work from, but we were given encouragement that anytime we could strengthen the role of women in the stories, we could do that. We took advantage of those opportunities.”

Although the Book of Mormon only mentions Sariah a few times, “we made sure that she was present and involved in as many scenes as we could. Likewise with Ishmael’s wife and daughters—they were part of that journey, and any time we could help them be part of strengthening the scene, we wanted to do that.” Kymberly Mellen agrees that the videos present an expanded voice and narrative for several female characters, including Sariah, Ishmael’s wife, and Nephi’s wife. Sariah reading the plates. Courtesy of the Church of Jesus Christ of Latter-day Saints.

Mellen also notes that in addition to filming her scenes as Sariah, she was also asked to pose for a variety of still shots that will be used in the Church’s curriculum going forward. “One of the photographers was a woman who was specifically hired to be looking for the kinds of things a woman would look for: relationships, a woman’s point of view, co-equal parenting moments, and female spiritual leadership.”

So when the director called “Cut,” her work was not yet done, and she would pose for still photos of other scenes: “Sariah with her hands on the plates, Sariah reading to her children, Sariah praying by herself. Praying at the head of the altar, with Lehi’s head bowed.”

Whenever possible, the photographers emphasized the family relationships at the heart of the Book of Mormon’s opening chapters. “Every time we could, we got shots of physical affection being expressed between Mama and her two wayward boys,” says Mellen. “Mom was mitigating, peacemaking, problem-solving, trying to get Laman and Lemuel’s side of the story.”

That mama-bear aspect of Sariah was key to Mellen’s understanding of the character, and something close to her heart. Her own four children are mostly in their teens and she well understands the tension as Sariah’s children part ways over religion.

“My kids are already on different faith journeys, despite their young ages,” she says. “My daughters, for example, are feminists and strong advocates for LGBTQ+ equality who miss the presence of powerful, vocal women in the scriptures. So if I have a chance to be a part of this project, to be one of just two speaking women in the Book of Mormon videos that are going to be used for the next 30 years, then I want to be part of that project. My daughters are my audience.”

Sariah, Mellen says, is a woman who is faithful and deeply religious but also devoted to family unity. She wants to put her children first.

“I’m seeing this mother as someone whose family was divided by different faith journeys, and not in a trivial way. These brothers tried to kill each other. They became a very dysfunctional family with a lot of violence, if we see it from a contemporary lens. And it’s my job to use that lens, to bring the human side to that character.”

Every Mormon leader (and teacher, and parent) should read this book