ANAHEIM, Calif. (RNS) — Muslim youths in California schools are bullied at double the rate of students across the nation, according to a report by the Council on American-Islamic Relations.

The report, “Singled Out: Islamophobia in the Classroom and the Impact of Discrimination on Muslim Students,” is based on a statewide survey of about 1,500 Muslim students between 11 and 18 years old. It was released Wednesday (Oct. 16) by the California chapter of the Council on American-Islamic Relations, or CAIR.

The organization found that 40% of participating students experienced some form of bullying because of their religion. That’s down from the 53% in 2017 who reported being bullied — either verbally insulted or abused — for being Muslim.

“How often have you been bullied at school for being Muslim?” These findings are based on a survey of 1,500 Muslim students between 11 and 18 years old. Graphic courtesy of CAIR

However, it’s still double the national average of about 20% of students ages 12-18 who reported being bullied at school in 2017, according to a report by the National Center for Education Statistics.

CAIR officials with the Los Angeles branch addressed the report Wednesday at their Anaheim-based office.

“It is not hard to make a connection to the hateful and bigoted rhetoric used by this administration,” said Hussam Ayloush, executive director of CAIR-LA. “The continual use of such rhetoric and the policies singling out and criminalizing Muslims, immigrants and asylum-seekers has normalized hate speech.” 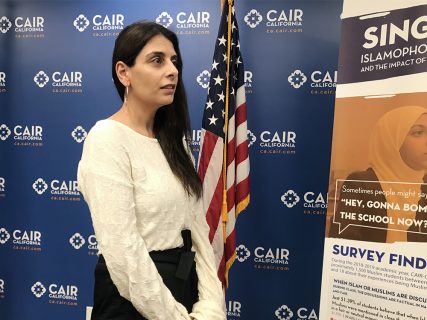 At a CAIR news conference on Oct. 16, 2019, in Anaheim, California, Ahlam Elabed speaks about the bullying her high school son has endured. RNS photo by Alejandra Molina

During the news conference, Ahlam Elabed spoke of the bullying her high school son has endured while in school.

Elabed said her special-needs son has been called a terrorist and has been compared to brown cartoon characters. He’s had his pants pulled down in PE class. His clavicle was broken and shoulder was dislocated when a boy pushed him, she said.

“I was horrified to discover that every day my son was going into an intolerant and ultimately unsafe environment,” Elabed said.

Elabed said the school has not taken appropriate action. With the help of CAIR-LA, she filed a complaint with the school district.

While survey results found that Muslim students in California were bullied at a lower rate than previous years, Patricia Shnell — a civil rights attorney with CAIR-LA — said other report findings are also noteworthy.

“Have you seen another student at school being bullied for being Muslim?” These findings are based on a survey of 1,500 Muslim students between 11 and 18 years old. Graphic courtesy of CAIR

“While still tragic, it’s actually kind of the first step in addressing the issue … so we can seek solutions.”

The biannual report provides insight from students in public and private schools across the state, including Los Angeles, Orange, Alameda, San Francisco, Sacramento and Fresno counties. This is the fourth such report since the organization began documenting bullying data since 2013.

Shnell said it’s important for the Council on American-Islamic Relations to continue documenting this data.

“This report is really the only one of its kind that measures religion-based bullying of American Muslim students in California,” Shnell said.

“It’s a really great educational tool not only for our community … but also for schools and educators so they can understand some of the struggles that their Muslim students face,” she added.