(RNS) — In a recent study, Pew reported that 26% of Americans now self-identify as religiously unaffiliated, up from 17% just 10 years ago. Millennials are defecting from organized religion at significantly higher rates than older generations and while the number of people who identify as atheists or agnostic has risen slightly, the largest category of leaver is the amorphous “nones.”

Put another way, people aren’t leaving faith, but they are actively leaving Christianity. Seemingly every other week there is another story of churches closing up shop, sold to developers to be converted into condominiums or the latest trendy bar.

Given the dominant public narrative about Christianity — Franklin Graham treating President Donald Trump as God’s anointed, clergy abuse scandals in every major denomination, churches more concerned with self-preservation than the gospel — it’s getting harder to argue that we should be continuing with life-sustaining measures. It may be time to concede it’s time to call hospice.

But for those of us who still believe, against the odds, that loving God and our neighbor can transform our world, the current scene represents something of an existential crisis. What are we to do?

For me, the answer is clear: The time for herculean efforts to stave off institutional death is past. We’re going to have to start living what we say we believe and welcoming new life in radical ways.

Not too long ago I read about a doctor in Flint, Michigan, who wrote unorthodox prescriptions. Rather than waiting for children to come to her with all manner of nutrition related diseases, Dr. Mona Hanna-Attisha writes her patients prescriptions (that include a $15 coupon) to the farmers market operating on the floor below her offices.

This is the kind of approach the church should take. Rather than working to treat the ills that are causing our demise, we might try stemming the cause by asking what good is needed in the world and then find the way to do it.

According to a 2016 article, religious institutions and industries in America represent $1.2 trillion a year in wealth, more than Apple, Amazon and Google combined. Imagine what could be done if, instead of preserving dying institutions that are buckling under systems of corrupt power, we used that capital to transform how we conceive of doing good in the world?

For too many Americans, Christianity has become identified with exclusion rather than inclusion. Its institutions claim God’s name, all the while systematically shrinking the size of the table so that the most vulnerable hungry are left to fend for themselves. It traffics in Band-Aids instead of doing the essential work of healing the world.

What if Christianity looked more like a farmers market attached to a clinic? What if our Communion tables were built as restaurants that employed the recently incarcerated for a living wage? What if, instead of practicing out of our ornate buildings, the church went anywhere people gathered to tell a narrative of hope, engage in ritual that heals us and build communities that reflect our deepest values?

In my 20 years of leading Christian institutions, I have seen more love and more goodness than any of the bad that makes the headlines. I’ve seen people learning to care for each other and communities, opening their arms in wide welcome. I’ve seen social-justice warriors champion the underdog, care for their neighbors and raise their voices for the oppressed. I’ve seen the gospel embodied in those who speak against abusive systems and will not stop, no matter the cost.

As the number of nones rose, this work has not stopped. But where it is most effective it is happening outside of the beautifully constructed stain-glassed walls we build in our attempts to contain and control the work of God in the world.

In the Christian tradition, we speak of a new heaven and a new earth: the belief that the former things can pass away and new realities come into being. We use words like resurrection, words that sound mystical if you’re being generous and crazy if you’re not. But these words give us a new lens through which to see our world, a new language to describe what can be, and a new heart to make it a reality. 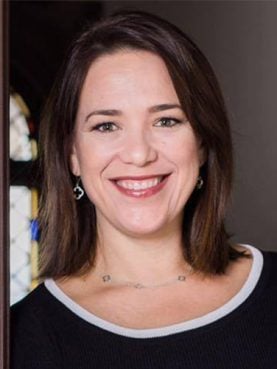 Rather than wringing our hands in anxiety that fewer people want to call themselves Christian anymore, let’s embrace the death of those expressions of our faith that do more harm than good.

Then let’s roll up our sleeves and begin the work of resurrection.

(The Rev. Amy Butler served as the seventh senior minister of The Riverside Church in New York City. Connect with her at pastoramy.com. The views expressed in this commentary do not necessarily reflect those of Religion News Service.)