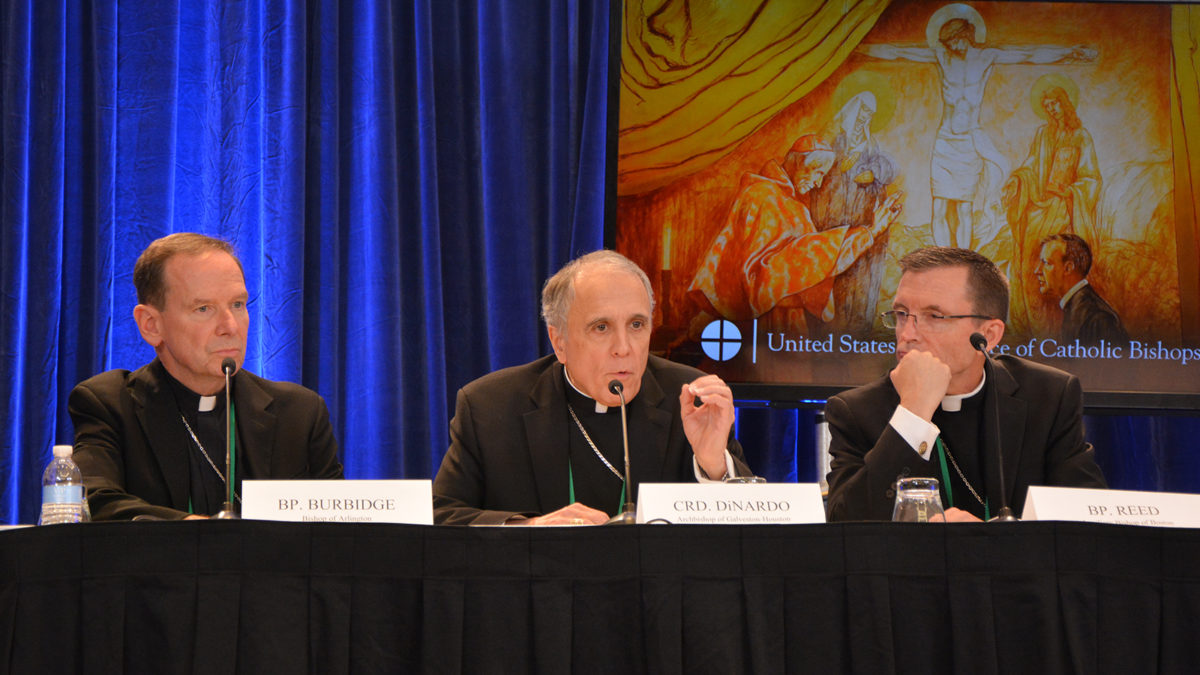 BALTIMORE (RNS) — As the 2020 election season heats up, leaders of the U.S. Conference of Catholic Bishops opened their annual fall meeting (Nov. 11-13) in Baltimore, Maryland, by calling on clerics to be “courteous” to combat political polarization and to advocate for certain public policies, such as legislation that could limit gun violence.

Cardinal Daniel DiNardo, archbishop of Galveston-Houston in Texas, presided over the conference Monday morning (Nov. 11), one of his last official duties as outgoing USCCB president.

In his final presidential address, DiNardo called on his fellow bishops to care for immigrants, oppose abortion and stand up for the abused. He said recent votes by bishops to combat sex abuse in the Catholic Church should be seen as the first steps down a long road to reform.

“The measures we approved last June are a beginning of this renewed striving, but they are only a beginning — more needs to and will be done,” he said. “(The book of) Sirach reminds us, ‘if you strive after justice, you will attain it …’”

“God is always courteous,” DiNardo said. “Let us be courteous."

The Texas Cardinal expanded on the idea at a press conference later in the day, telling journalists that while bishops can’t “order” other Catholics to avoid vitriol, they can “show it” in their own behavior.

Bishops will likely be tested on their ability to debate politics civilly throughout the week, as they are also slated to vote on supplementary materials to “Forming Consciences for Faithful Citizenship,” an official document distributed to Catholics outlining their political responsibilities.

Even so, Dewane called on his fellow clerics to combat the scourge of gun violence by utilizing the power of the Catholic tradition.

Dewane listed mental health as an issue impacting gun violence but pointed out that “research does not support the notion that persons with mental illness are more prone to violence (than) the general population.”

He added: “If persons in a suicidal crisis can be denied access to guns, the odds of saving their lives dramatically increase.”

Dewane later told Religion News Service that mustering the “full strength” of the Catholic tradition to prevent gun violence could involve a number of strategies, such as invoking Catholic social teaching and preaching about gun safety in church.

He also suggested that bishops could divest church resources from companies involved in gun manufacturing, just as they have with other groups.

“We have an investment policy about military and heavy weaponry — why don't we have that about hand guns, or the manufacture of other arms?” he said, adding that he would explore doing so in his own diocese. “You start talking about investment in gun manufacturers, you'll get attention.”

Dewane’s presentation sparked a discussion among the bishops at the assembly, with several elucidating different issues they say contribute to gun violence.

Archbishop Salvatore Cordileone highlighted what he called the impact of “fatherlessness” on gun deaths, saying children should be raised in a healthy home environment.

Cardinal Blasé Cupich of Chicago argued more attention should be drawn to how the gun lobby and firearm manufacturers are often motivated by profit.

“There’s a lot of money involved in this,” he said, noting that the illegal drug trade can also lead to gun violence in the United States as well as in Central and South America.

Politics even made its way into a conversation about budget concerns. During a presentation on the group’s finances, Archbishop Dennis Schnurr of Cincinnati, Ohio, noted that the USCCB’s Migration and Refugee Services office has had to “downward adjust” its budget in recent years due to the dramatic decrease in refugee admissions by Donald Trump’s administration.

The afternoon session included a robust conversation about the religiously unaffiliated, led by Bishop Robert Barron of of Los Angeles, California, building on a presentation he delivered on the same topic at a USCCB meeting earlier this year.

Barron stressed the importance of social media sites such as Reddit on reaching the religiously unaffiliated, saying online forums are frequented by young people who have moved away from organized religion.

“I think we need to invest a lot of time and resources into social media,” Barron said. “Someone who knows how to use it and knows the Catholic faith."

The session was followed by a brief update from Boston's Cardinal Seán O'Malley on the Vatican's ongoing investigation into sex abuse allegations against defrocked Cardinal Theodore McCarrick, who previously served the Archdiocese of Washington. O'Malley said he had seen a "hefty" version of the Vatican's report on McCarrick that is currently being translated into Italian before it is reviewed by Pope Francis and released.

Bishops closed out the day's proceedings with a presentation by Archbishop Joseph Naumann of Kansas City, Kansas, that focused on abortion and pregnancy centers.

"The challenges can be immense for women in difficult pregnancies, especially women in poverty," he said.