(RNS) — Let me tell you about Uber drivers.

But, first, let me tell you about a stock character in Hasidic stories — the baalagolah, the wagon driver. Wagon drivers are usually the source of great, hidden wisdom.

My baalagolah was a big, Irish-Catholic man named Chet.

He was the Uber driver who picked me up at the Pittsburgh airport and drove me to an address in Squirrel Hill. I was in Pittsburgh because I have been the visiting scholar at Rodef Shalom Congregation, and I have an ongoing gig there.

Chet heard me talking on the phone, and when I hung up, he asked me: “Are you a rabbi?”

I admitted that I was.

Chet said to me: “You’re a rabbi, and you’re going to Squirrel Hill. The morning after it happened, I wound up picking up people who had just run out of Tree of Life Synagogue. For the rest of that day, and for the rest of the weekend, I gave everyone free rides. I would not accept money from anyone.” 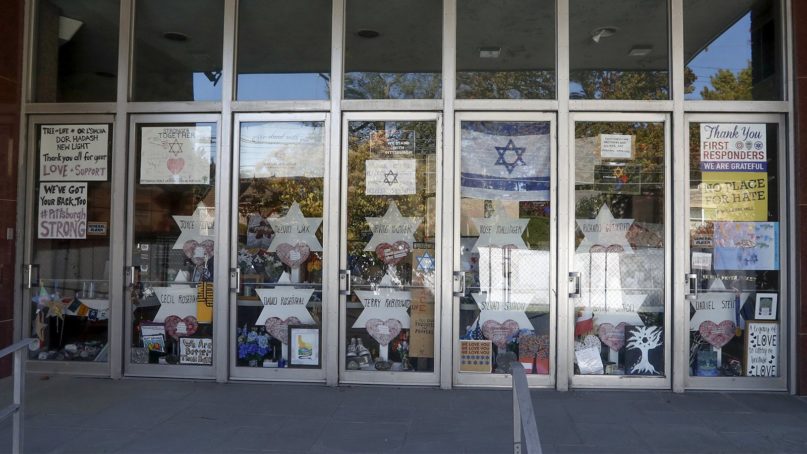 The stars with the names of victims, and other tributes that were placed around the Tree of Life Synagogue after the shooting that killed 11 worshippers and wounded seven others last year, are displayed in the closed entrance Thursday, Oct. 24, 2019 in the Squirrel Hill neighborhood of Pittsburgh. Sunday, Oct. 27, marked the one-year anniversary of the deadliest attack on Jews in U.S. history. (AP Photo/Keith Srakocic)

Silence for a few more minutes.

“Let me tell you about my half-brother, Andre.

“Outside that concentration camp, my father found a woman wandering aimlessly. He took her into his jeep. He fell in love with her. She was a French Jewish woman.

At this point, I was in tears.

I arrived at my destination, and I hugged Chet (and yes, I gave him a good review on Uber) (and yes, I left him a big tip).

It was the best money that I have ever spent on Uber.

All of which got me thinking about a little-known character in the book of Genesis who has one of the great walk-on parts in all of Jewish literature.

It happens in Genesis, chapter 14.

Even as the Jewish people is about to be born, Abram (later: Abraham) faces a military crisis. His nephew Lot has been taken hostage. Abram must make the first pragmatic decision in Jewish history. He can let his nephew die in captivity, or he can join forces with the king of the evil city of Sodom, as well as a few other kings.

Abram swallows hard and joins that alliance of kings in battle. He deploys his forces as far north as Damascus, and he rescues his nephew.

As soon as the battle is over, according to Genesis,

When he (Abram) returned from defeating Chedor-laomer and the kings with him, the king of Sodom came out to meet him in the valley of Shaveh, which is in the Valley of the King. And King Melchizedek of Salem (which might have been Jerusalem) brought out bread and wine; he was a priest of God Most High (El Elyon). He blessed him, saying,

“Blessed be Abram of God Most High,

Creator of heaven and earth,

And blessed be God Most High,

Who has delivered your foes into your hand.”

And Abram gave him a tenth of everything.

Abram’s career as the first Jew is only two chapters old, and he has already learned some valuable lessons about interacting with the gentile world.

Almost as soon as he and Sarai settled in the land of Israel, there is a famine. Abram and Sarai migrate south to Egypt, where they encounter Pharaoh, king of Egypt.

Pharaoh sees how beautiful Sarai is, and he brings her into his harem. As punishment, God sends plagues upon Pharaoh’s household — an uncomfortable episode that serves as a literary foreshadowing of the plagues that would afflict Egypt during the Exodus. Pharaoh sets Sarai free, and in the process he pays Abram off so that he and Sarai would simply go away.

So, the first Jewish inter-religious encounter is with Pharaoh in Egypt.

What does Abram learn from the encounter with Pharaoh?

The world hates the Jews.

But, what does Abram learn from his encounter with Melchizedek — at the first inter-religious luncheon in Jewish history?

The world blesses the Jews.

The biblical Melchizedek comes out of nowhere, and he returns to nowhere.

In an ancient legend that I invented last evening, this is what I now believe.

Melchizedek comes out of nowhere and returns to nowhere — because he is alive in every generation.

At the end of our ride, Chet said to me: “I am a man of faith. I am a practicing Catholic. When I think of what has happened to your people, and when I think of how strong you are, and how much you care about each other and the world, I am totally in awe.”

Some things are simply supposed to happen. There is no such thing as a coincidence. A coincidence is merely God working behind the scenes. It’s called bashert. I believe that there is a sacred meaning behind bashert.

In some way, God needed me to meet Chet.

Chet is the Melchizedek of Pittsburgh.

Opinion
On a second COVID-19 Thanksgiving, how to find room for thanks
Follow us on Facebook!
Submit your photos to RNS