GOLDSBORO, N.C. (RNS) — In his visit to a predominantly African American church, Pete Buttigieg, the Democratic presidential candidate from Indiana, made sure to arrive early and to bring his Bible with him.

He took a seat in the third pew at Bishop William J. Barber’s racially diverse Greenleaf Christian Church on Sunday (Dec.1), and, to all appearances, Buttigieg, a Harvard graduate who became a Rhodes scholar and speaks seven languages, was the perfect church guest.

He bowed his head in prayer. He rose with everyone else to recite a litany honoring Rosa Parks and other women leaders on the 64th anniversary of her defiant refusal to give up her seat to a white person on a segregated bus in Montgomery, Alabama.

And like everyone else he took Communion at the end of the service.

But Buttigieg, an Episcopalian who has spoken at length about faith and has worked to articulate an alternative vision of morality to that of the Christian right, is far more popular with white voters and has struggled to woo blacks.

It was not clear that he won any of them over after his appearance at the Disciples of Christ church about 53 miles southeast of Raleigh, the state capital.

Greenleaf Christian Church, where Barber has served as pastor since 1993, is in many ways the headquarters of the new civil rights struggle. Two Sundays ago, Barber hosted National Book Award winner Ibram X. Kendi for a forum on antiracism. He is also co-chair of the Poor People’s Campaign, a multiracial national effort to alleviate poverty that borrows from Martin Luther King Jr.’s last major project.

For Buttigieg, who was unable to attend a Poor People’s Campaign June forum with several presidential candidates, it was especially important to come to North Carolina. Barber welcomed him while making clear the forum was in no way an endorsement. He doffed his ministerial robe in favor of a black jacket to interview the candidate. 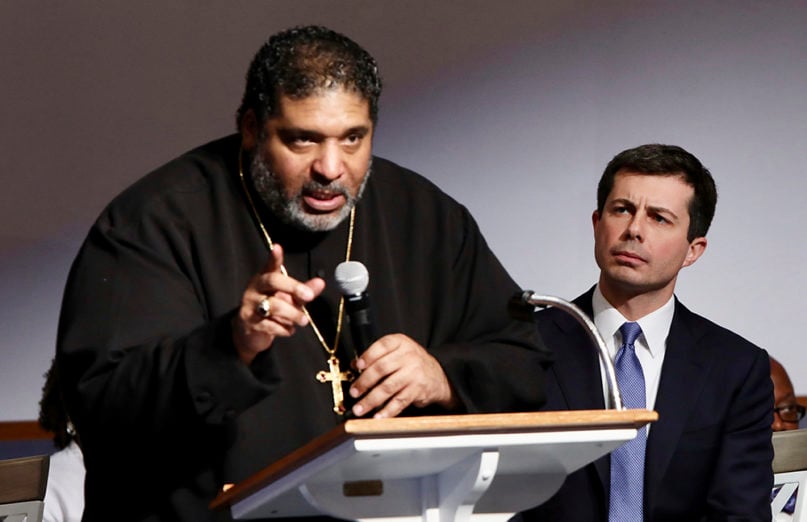 At the Q&A, Buttigieg won warm applause for his positions on raising the minimum wage, increasing access to unions, bolstering public schools, eliminating private prisons and providing Medicare to all who want it, among other issues.

“I believe I’m here to make myself useful,” Buttigieg said after the service.

Buttigieg said he had been challenged by a speech Barber gave in Philadelphia years ago to live out Jesus’ call to visit the prisoner and welcome the stranger — values he said he took to heart during his eight years as mayor of South Bend, Indiana.

“In this eight years, often we have come up short, but often we’ve been able to advance together when our priorities were in the right place — reducing poverty, improving health and growing the city,” he said.

But Buttigieg did not address the issues that have strained his relationship with African Americans, and the Q&A forum did not ask about them.

Shortly after taking office as mayor of South Bend, Buttigieg fired the city’s popular African American police chief after allegations he had improperly recorded phone calls made by his white subordinates. Then, earlier this summer, a white South Bend police officer shot and killed a black man.

“I’m disappointed he hasn’t spoken much on police brutality, and I don’t like the fact that he fired the black police chief who wanted to bring the issue out,” said Linda Wilkins-Daniels of Goldsboro, president of the African American Caucus of the North Carolina Democratic Party who came to hear Buttigieg speak. “That’s his drawback. If he addresses those issues, black people will be more accepting.”

Buttigieg has surged ahead of other presidential contenders in the most recent Iowa polls. Last month’s Quinnipiac poll saw Buttigieg and Warren in the lead among likely Democratic caucus-goers ahead of the Feb. 3 Iowa caucus.

But Iowa has few black voters, and polls show Buttigieg’s support among African American voters is in the single digits.

Barber took pains during Sunday’s service and later during the forum to dispel what he called a “false narrative” that blacks won’t support Buttigieg for another reason: because he is openly gay.

“If you’re authentically Christian, you have to be open and affirming,” Barber said, reminding his church that many of their heroes, including poet and novelist Langston Hughes, playwright Lorraine Hansberry and civil rights strategist Bayard Rustin, also had same-sex attraction.

Participants at the forum didn’t speak to the issue, either.

Sekia Royall, a Goldsboro activist in the state’s public service workers union, UE 150, said she thought Buttigieg did a good job but was planning to support Vermont Sen. Bernie Sanders because of his position on Medicare for All. (Buttigieg would expand Medicare but give Americans the option of keeping their private insurance.)

Candace Laughinghouse, a Raleigh resident who attended the forum, said she leaned toward supporting Massachusetts Sen. Elizabeth Warren but was also open to Buttigieg.

“I’m definitely going to go home and see what he’s done in South Bend more,” she said. “I wanted to hear more about that.”