(RNS) — On Dec. 21, the United States Commission on International Religious Freedom, more commonly known as USCIRF, will run out of funding. After 21 years of problematic existence, the time has come to let it expire.

USCIRF was created as part of the 1998 International Religious Freedom Act, which came about because of a House Republican effort to portray then-President Bill Clinton as a do-nothing when it came to religious freedom. It was a false portrayal, as John Hanford, religion point man for Sen. Richard Lugar, realized; after intense behind-the-scenes scrapping, the legislation was cleaned up, embraced by the Clinton administration and passed into law.

At the last minute, however, the instigators succeeded in rolling a Trojan horse into the bill in the form of a seven-figure (now $3.5 million) annual budget for USCIRF.

Rather than serving, as intended, as an advisory body to the new ambassador for international religious freedom, the commission came into existence as a microagency unto itself, independent of the State Department, even as the act gave State responsibility for monitoring religious freedom around the world.

The new entity comprised nine commissioners appointed by Democrats and Republicans along with, ex officio, the ambassador, and a staff of 15 to 20. In short order, it assumed the role of a freelance religious liberty scold, issuing its own country reports alongside the State Department’s and denouncing other countries’ behavior — all to little if any avail. The principal denouncers proved to be a few continually reappointed GOP-appointed commissioners intent on highlighting the persecution of Christians.

Eight years ago, USCIRF had a near-death experience when its renewal was held up in the Senate. It recovered, but thanks to the efforts of Sen. Dick Durbin, commissioners’ terms were limited to two years, renewable once. 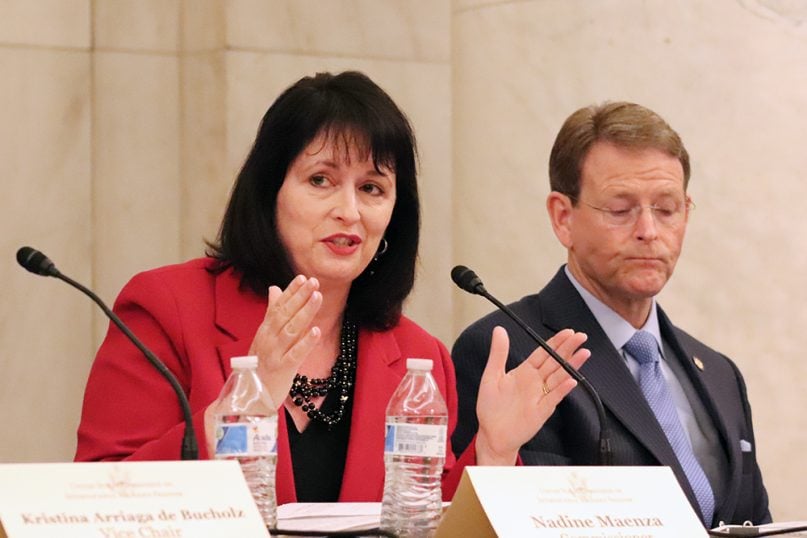 Nadine Maenza, left, commissioner of the U.S. Commission on International Religious Freedom, speaks at the April 29, 2019, event when USCIRF released its annual report in Washington. Commissioner Tony Perkins is on the right. RNS photo by Adelle M. Banks

This year, Democratic senators have insisted on more stringent rules. Under the terms of a bipartisan renewal bill, normal government standards of planning, accountability and personnel management were to be put in place and commissioners were to be forbidden from using outside funding for official travel.

And then there were these provisions:

When a member of the Commission is speaking at a public event in his or her capacity as a private citizen, the event sponsor shall not identify the member’s affiliation with the Commission in any printed materials or when introducing the member.

No, they would require that commissioners, in their official capacity, speak on behalf of the commission’s common position, instead of using their status to give the impression that they are speaking for the U.S. government.

But of course, in deference to them, the Republican co-authors withdrew the bill — with Marco Rubio, that profile in senatorial courage, whimpering that they shouldn’t be blamed for the offending provisions.

So be it. Mssrs. Perkins, Bauer and Moore have at their disposal sufficient bully pulpits from which to denounce the persecution of Christians.  Let USCIRF rest in peace.