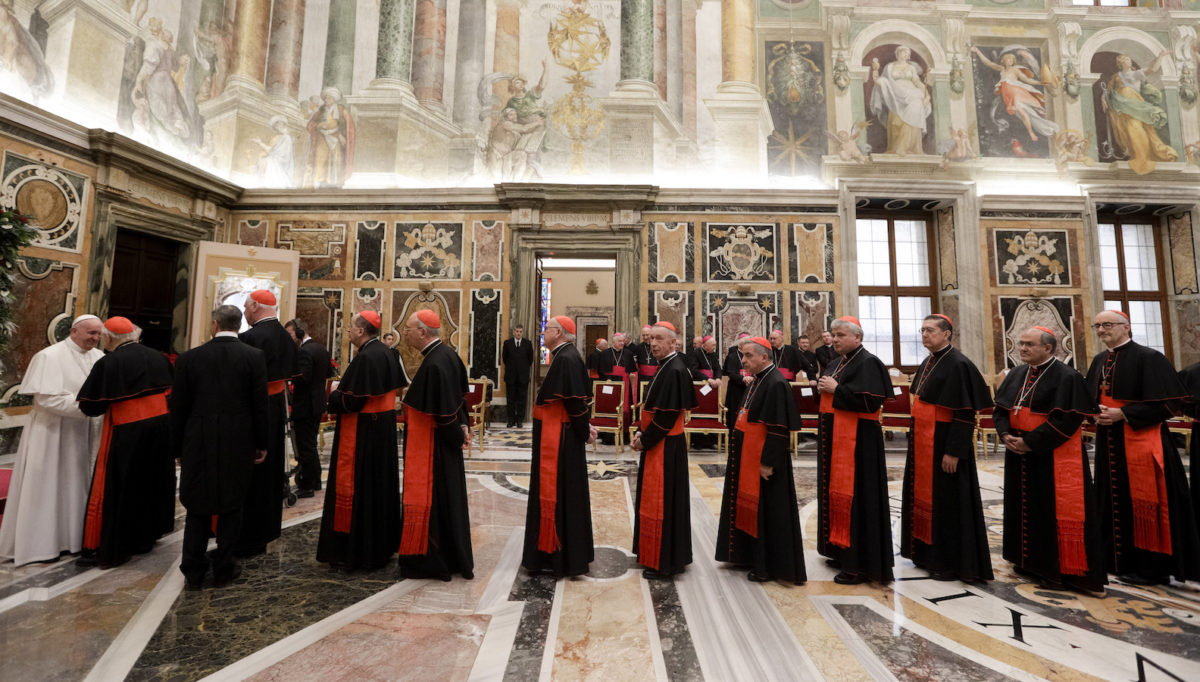 Pope Francis greets cardinals on the occasion of his Christmas greetings to the Roman Curia, in the Clementine Hall at the Vatican, Saturday, Dec. 21, 2019. (AP Photo/Andrew Medichini, Pool)
December 21, 2019
Claire Giangravé

VATICAN CITY (RNS) — As the decade comes to an end, Pope Francis focused on change — of all sorts — during his Dec. 21 Christmas speech to the cardinals and heads of the Vatican departments that make up the Roman Curia.

“Christian life is a journey, a pilgrimage. The history of the Bible is a journey, marked by constantly new beginnings,” Francis told the officials gathered in the Clementine Hall of the Apostolic Palace.

Francis called the present time not one of linear evolution, but of "epochal" changes. “It entails decisions that rapidly transform our ways of living, of relating to one another, of communicating and thinking, of how different generations relate to one another and how we understand and experience faith and science,” he said.

“Often people experience change by limiting themselves to putting on a new dress, when in reality they stay the same,” Francis said.

“The healthy approach is rather to let oneself be interrogated by challenges of the present time,” he added. “Change, in this sense, would assume an entirely different aspect: from a surrounding element, a context and a pretext, from an outside landscape… it would become ever more human, and Christian.”

The pope’s Christmas message to the powerful heads of the Curia is an important yearly appointment that offers a look at the pontiff as a manager, who uses words such as “mission,” “synergy” and “change” in a down-to-earth way.

Francis’ election to the pontificate in 2013 took place under the assumption that he would be the pope to enact long-awaited reform, not just in the handling of the sexual abuse crisis but also — and perhaps more importantly — in cleaning up the Vatican finances and taking on the bureaucratic pachyderm that is the Roman Curia.

Concerning sexual abuse, the pope undertook a flurry of activity in the days leading up to the holidays. On Tuesday, he released a document lifting pontifical secrecy for cases of sexual abuse by clergy (with powerful repercussions in canon law, especially for victims).

On the same day he accepted the resignation of former papal representative to Francis, Archbishop Luigi Ventura, who was accused of inappropriate touching of young men.

The pope began his speech Saturday with the acceptance of the resignation of the 92-year-old Cardinal Angelo Sodano as dean of the College of Cardinals.

The acceptance of Sodano’s resignation fits with the trend of removing officials who have been notoriously tied to sexual abuse coverup. Sodano had been a supporter of the known pedophile and former priest Marcial Maciel Degollado, founder of the Legionaries of Christ. In 2010, Sodano was accused of halting investigations into the case of Austrian Cardinal Hans Hermann Groër, who was charged on multiple counts of sexual abuse of children in the 1990s.

That same year, the cardinal referred to the mounting evidence of widespread sexual abuse by priests as “petty gossip.”

His resignation is especially significant given the position he occupied within the Vatican for the past 15 years. In an attempt to perhaps reduce the power and influence that the dean of cardinals holds, Pope Francis also released a document on Saturday limiting its mandate to only five years.

During his speech, the pope emphasized the need for change in the Curia, born from the understanding that “development and growth are a characteristic of earthly and human existence, while in the eyes of the believer, the stability of God is at the center of everything.”

As a 2,000-year-old institution, the Catholic Church has taken an insular approach to change, placing a premium on the stable foundations of tradition rather than the unforeseeable changes of the times. But Francis reminded the heads of the Vatican departments that change is hardly something new in Catholicism.

Yes, he said, the teachings of the past are fundamental, but “memory is not static, it’s dynamic.”

As an example, Francis referred to the changes he has enacted within the Vatican departments. One of them concerned “the Church’s first and most important duty: evangelization.”

The pope created a mega-division dedicated to evangelization, the Dicastery for the Evangelization of Peoples, and took over other existing departments with an emphasis on adapting them to changes in demographics within the Church and emerging technologies.

“Christendom no longer exists!” Francis declared in his speech. “Today we are no longer the only ones who create culture, nor are we in the forefront of those most listened to.” He insisted such changes require a new mindset in terms of evangelism and pastoral work.

“We are no longer living in a Christian world, because faith — especially in Europe, but also in a large part of the West — is no longer an evident presupposition of social life; indeed, faith is often rejected, derided, marginalized and ridiculed.”

In order to address this new landscape, the pope said, the Curia must be willing to embrace, “together with a cultural change, an institutional and personal change and go from a compartmentalized work” to one that is “intrinsically connected, in synergy.”

Francis insisted on the centrality of protecting immigrants and refugees, who represent all those who are “discarded from globalized society.” He insisted these marginalized groups, “represent a voice crying in the wilderness of our humanity” and that Jesus lying in the manger “has the face of our brothers and sisters most in need.”

All this change, he added, doesn’t mean that the church must be blind to human error nor rely on “magic formulas or shortcuts.”

The biggest threat to this necessary change, according to Francis, is rigidity.

“The rigidity that is born from fear of change ends up placing numerous blocks and obstacles on the ground of the common good, transforming it into a mine field of lack of communication and hate.”