(RNS) — In the Catholic Church, most scandals are about sex or money. The most recent scandal concerns both, where a sexual predator gave money to Vatican officials who were responsible for reviewing allegations against him.

Theodore McCarrick, the former cardinal archbishop of Washington, D.C., was dismissed from the priesthood in 2018 because of his sexual abuse of minors and sexual harassment of seminarians. Records show that he was giving money to Vatican officials responsible for dealing with allegations against him during the time he was accused of harassing seminarians.

The gifts came from a special fund under McCarrick’s control beginning in 2001, when he became archbishop of Washington. He had a similar fund while archbishop of Newark, New Jersey, from 1986 to 2000, but the Archdiocese of Newark has not released any information.

The Washington Archdiocese told The Washington Post, “The funds in the account came from donations sent personally to Mr. McCarrick to direct in his sole discretion.”

For the most part, McCarrick used the $6 million in the fund for legitimate church ministries. It is no surprise that he gave $90,000 to St. John Paul II and $291,000 to Pope Benedict XVI. This money would have gone into the Vatican coffers or to the popes’ charities.

“Yet nearly 200 checks were sent to fellow clerics, including more than 60 archbishops and cardinals,” according to The Post. Whether this money eventually went to charity or to personal use was up to the discretion of the recipient.

Gifts he made to Vatican officials, however, raise questions about whether McCarrick’s donations were buying access or protection. 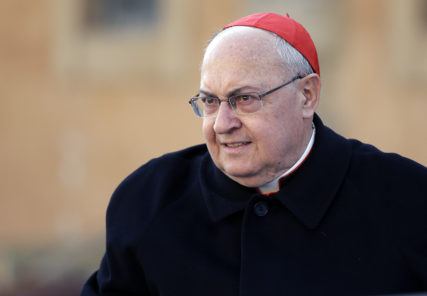 In this March 4, 2013, file photo, Argentine Cardinal Leonardo Sandri arrives for a meeting at the Vatican. A 2006 letter from Sandri, a top Vatican official, confirms that the Holy See received information in 2000 about the sexual misconduct of now-resigned U.S. Cardinal Theodore McCarrick, lending credibility to bombshell accusations of cover-up at the highest echelons of the Catholic Church. (AP Photo/Andrew Medichini, File)

High officials in the Vatican receiving gifts included Cardinal Leonardo Sandri ($6,500) and Archbishop Gabriel Montalvo ($5,000). These gifts are problematic because these two knew of the accusations of sexual harassment against McCarrick. Montalvo, who died in 2006, was the pope’s representative or nuncio to the United States in the later years of John Paul II’s pontificate, and Sandri was a senior official in the Vatican Secretariat of State.

Cardinal Angelo Sodano, who served as secretary of state when McCarrick was promoted to Washington and made a cardinal, received $19,000 from 2002 to 2016. Sodano, age 92, was recently retired from his position as dean of the College of Cardinals.

The Rev. Boniface Ramsey, a teacher in the late 1980s and early 1990s at the Immaculate Conception Seminary in the Archdiocese of Newark, was shocked when McCarrick was appointed archbishop of Washington in 2000. After the announcement, he told Montalvo that McCarrick had pressured seminarians to sleep with him at his beach house in New Jersey.

Montalvo asked Ramsey to put the accusation in writing, which the nuncio forwarded to the Vatican Secretariat of State. It was not until six years later that Ramsey received an acknowledgment from Sandri for his letter. It would be surprising if the accusation against McCarrick was not brought to Sodano’s attention by Sandri.

Whether the Vatican had heard of these accusations earlier is not known. We are still waiting for the Vatican to release a report on the McCarrick scandal requested by Pope Francis. In any case, despite Ramsey’s letter, McCarrick was made a cardinal in 2001.

There is, of course, no proof that the monetary gifts influenced the Vatican’s treatment of McCarrick, but his gifts to Montalvo, Sandri and Sodano do not pass the smell test. Some of the recipients of McCarrick’s gifts defended them to The Post as customary gifts among Catholic leaders during the Christmas season or as a gesture of appreciation for their service. Cardinal Angelo Sodano blesses the crowds inside St. Peter’s Basilica after a special Mass prior to the conclave to elect a new pope in 2013. Photo by George Martell/The Pilot Media Group

This is part of the problem. No reputable organization allows officials to receive major gifts from those they supervise, have authority to promote or with whom they do business. That those working in the Vatican could consider these gifts “customary” is disgraceful. Once again, the Vatican is acting like an 18th-century court rather than a modern organization. Such gifts might be “customary” in corrupt Third World countries, but they should not happen in the Vatican.

Top Vatican officials who can influence decisions about the appointment of bishops and other matters in the Vatican should not be accepting gifts from those impacted by their decisions.

Some officials, including Cardinal Joseph Ratzinger, recognized this. When the Legionaries of Christ routinely gave checks to Vatican officials at Christmas, Ratzinger refused them and went on to launch an investigation of the order’s founder, who was ordered to withdraw from ministry to a life of prayer and penance when Ratzinger became pope.

Some gifts were clearly not successful in buying protection. Archbishop J. Augustine Di Noia, who was the highest-ranking American in the Vatican office dealing with child sexual abuse, received six checks worth a total of $9,500 from 2001 to 2009, before any of the victims of child abuse by McCarrick had come forward. When McCarrick’s case did go before a panel in the Congregation for the Doctrine of the Faith, Di Noia voted to remove him from the priesthood.

This scandal shows the need to pull the Vatican bureaucracy into the 21st century by setting limits on the dollar value on gifts that officials can accept. Full disclosure should be required for any stipends received by officials for speeches or other activities. Conservative American organizations are known for inviting Vatican officials to speak and paying them fat stipends.

If officials need more money, the Vatican should raise their salaries.

This scandal also shows the urgent need for the Vatican to release its report on McCarrick. Catholics deserve to know which officials knew about the sexual harassment of seminarians before McCarrick was promoted to Washington and made a cardinal. It is disgraceful if these accusations were ignored simply because he was a great fundraiser and generous donor.

On the other hand, the truth could be that McCarrick was simply an extraordinary manipulator who fooled everyone, not only in the Vatican but in the highest levels of the U.S. government. Remember, McCarrick was once a member of the U.S. Commission on International Religious Freedom. In order to be appointed, he had to go through an FBI background check for clearance to receive top secret information from the U.S. State Department. Why did they not find anything?

This column has been corrected. An earlier version incorrectly said that the founder of the Legionaries had been dismissed from the priesthood.