(RNS) — In a new book, “From the Depths of Our Hearts: Priesthood, Celibacy, and the Crisis of the Catholic Church,” Pope Emeritus Benedict XVI and his co-author, conservative Cardinal Robert Sarah, strongly defend celibacy, arguing that priesthood and sexual abstinence are integrally linked together. He argues that even married priests were supposed to abstain from sex after ordination.

This would have been news to 11 of the 12 Apostles, including Peter the first pope, who were married. To say that one must be celibate to be a good priest contradicts reality and is insulting to married priests and ministers in Protestantism and the Eastern churches.

True, after the apostolic period, there were church rules requiring abstinence from sex before saying Mass, but this teaching certainly did not come from Jesus. It was an imitation of the similar rules for Levitical priests who had to abstain from sex during their time of service in the temple. This was not a major problem when Mass was only celebrated on Sundays, but when Mass became a daily event, it made marriage impossible.

What we really learn from this new book is the danger of having two popes in the Catholic Church. Pope Francis is seriously considering a proposal to allow mature married men to be ordained, a proposal that came out of last October’s Synod on the Amazon. The book will make it much more difficult for Francis to do so.

The synod, mostly made up of bishops from the Amazon region, argued that the church in that part of the world desperately needs priests, and not enough men are willing to give up marriage and family as the price for ordination. They voted 128-41 in favor of allowing the ordination of mature married men. 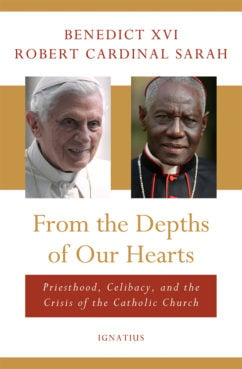 “From the Depths of Our Hearts: Priesthood, Celibacy, and the Crisis of the Catholic Church” Image courtesy of Ignatius Press

We currently only know of the new book from advanced excerpts in the media. When the book is published in mid-February, historians and theologians can more thoroughly examine its arguments. This should be done with respect but also with recognition that Benedict’s words no longer carry any papal authority.

From the announcement of his resignation almost seven years ago, people have been speculating about the danger of having two popes in the Catholic Church. Although technically, once he resigned, Benedict lost his papal authority, many people revere and honor him as pope.

For the most part, Benedict has taken a low profile and not spoken or written much since he retired. However, whenever he did, he made headlines, and discussions of how his views differed from those of Francis followed. This is problematic for a church that prizes unity in papal teaching.

Part of the problem is that Benedict was poorly advised on how the church should deal with retired popes. The church clearly needs to rethink its rules for the situation. We don’t want to imprison them, as Pope Celestine’s successor did to him, but the church needs to make clear that there is only one pope.

I would suggest five rules for dealing with retired popes to make it clear that there is only one ultimate authority in the Catholic Church.

Thus, Benedict would be called retired Cardinal Joseph Ratzinger, bishop emeritus of Rome. The same would be true of Francis if he retires.

Some monarchies follow this pattern. When Edward VIII resigned, he became the Duke of Windsor. He was not king emeritus. In the Netherlands, which had two queens resign because of age, they became princesses again after their resignations.

Third, the retired pope should put off the white cassock and return to the black or red robes of a cardinal. In the Catholic Church, symbols are important. Symbols communicate, they teach. If you are not the pope, you should not be wearing white. Having two men wearing white sitting next to each other makes them look like equals when they are not. 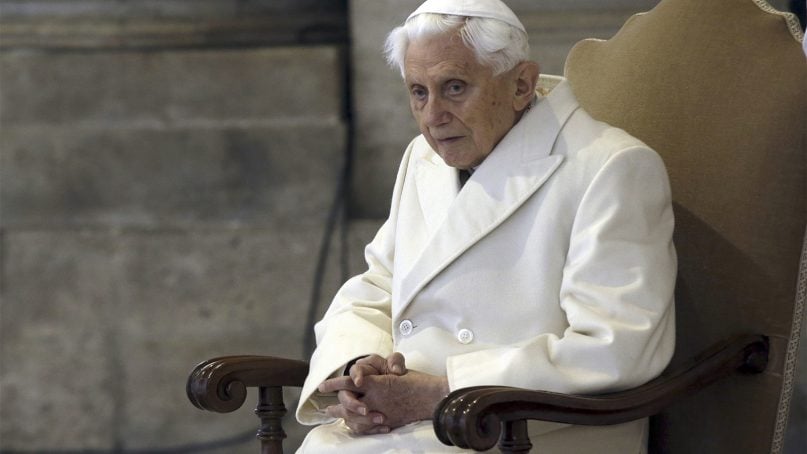 Pope Emeritus Benedict XVI sits in St. Peter’s Basilica as he attends the ceremony marking the start of the Holy Year on Dec. 8, 2015, at the Vatican. (AP Photo/Gregorio Borgia)

The fourth issue is where the retired pope should live.

Some felt that Benedict’s staying in the Vatican was a mistake. Some suggested Castel Gandolfo, the pope’s summer residence. Certainly, the town, which is about 15 miles from Rome, would like that since it has suffered from a decline in tourism because Francis does not visit.

Some suggested that Benedict return to Germany, but that raises questions about security. No one wants an ex-pope murdered or kidnapped on their watch. Would the Vatican or the German government have to provide protection? There are also legal implications of leaving Vatican territory. Since Benedict is no longer a sovereign, would he be subject to subpoenas, depositions or extradition in sex abuse cases?

There is also the danger that a location outside the Vatican might become a place of pilgrimage for opponents of the current pope. That would not be good.

The fifth issue is whether a retired pope can speak on church issues.

The current circumstances are somewhat ironic, since Cardinal Ratzinger, as head to the Vatican doctrine office, was infamous for silencing theologians with whom he disagreed. It is also ironic to hear liberal academics, who prize freedom of expression, complaining when Benedict speaks or writes.

As a proponent of open and free discussion in the church, I cannot in principle say that retired popes must be silent. I think we must trust in their prudence and respect for the office of the papacy. In reality, I don’t think there is any way to silence a retired pope, especially one like Benedict who spent much of his life as a theologian and teacher.

If the first three suggestions I give above were followed, of course, whatever a retired pope said or wrote would be less threatening, because both legally and symbolically there would be only one pope in the Catholic Church.