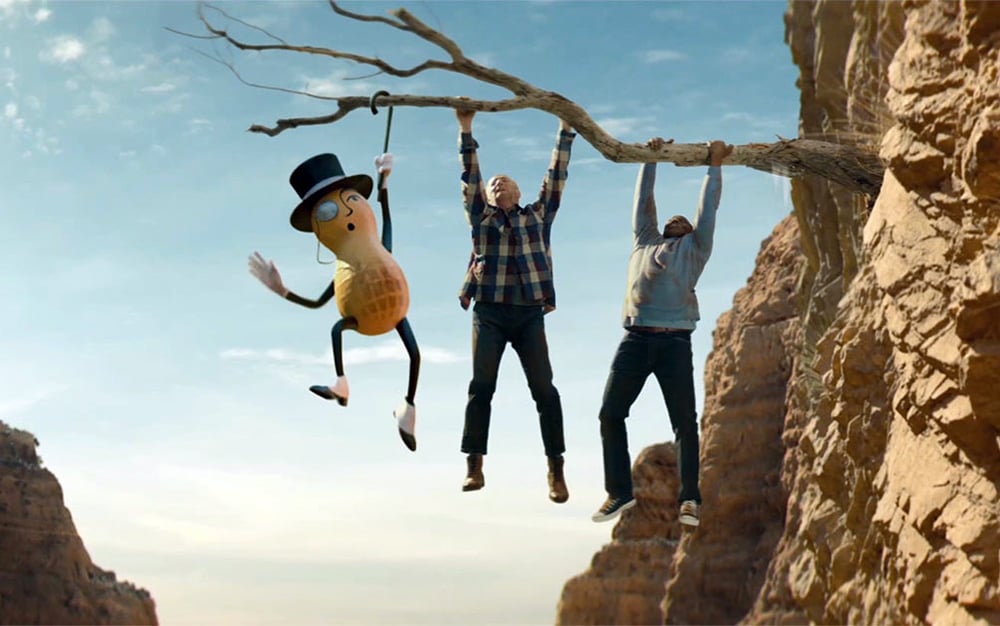 Planters mascot Mr. Peanut, left, dies while giving himself up to save others ahead of an upcoming Super Bowl commercial. Image courtesy of Kraft Heinz
January 28, 2020
Tara Isabella Burton

In an announcement tailor-made for the age of virality, the snack food company Planters, a division of Kraft, announced last week that its beloved mascot, the monocle-wearing, top-hatted Mr. Peanut, had died at the age of 104. The press release, which was tied to an upcoming Super Bowl commercial, proclaimed that Mr. Peanut “died doing what he did best — having people’s backs when they needed him most.” It was a death designed for the tweets.

Other Kraft brands leaned into the tragedy. Kraft Mac and Cheese lamented that “our box is especially blue today,” adding that “we always looked up to Mr. Peanut. In the snack aisle and in life.”

But stunningly, so did other companies mourn. Mr. Clean, the muscular eponymous mascot of Proctor & Gamble household products, tweeted: "Always classy, always crunchy, always cleaned up nicely. We'll miss him!" Unilever's ice cream brand Klondike, too, had a eulogy for the dearly departed nut. "It’s what’s under the shell that counts,” its Twitter account said. “You will be missed Mr. Peanut.” It added a crying emoji.

Again, in case you missed it: A fictional character used to sell peanuts was abruptly killed off as part of a social media stunt. Other fictional characters and their companies expressed sincere condolences in what appears to be a cross-branding promotional exercise. Multiple news outlets covered it all, and later reported on Planters' announcement that it would dial back its commercials out of respect for NBA star Kobe Bryant, who died over the weekend.

Greater love has no man than this, Jesus once said, than a man lay down his life for his friends. In 2020, it’s Mr. Peanut who makes this a thing. A video available on the internet shows how Mr. Peanut ends up hanging from a cliffside branch with the actors Wesley Snipes and Matt Walsh. Perceiving that the branch will hold without his weight, the snack icon releases his hold and plunges to his death.

The hero who sacrifices himself for those he loves, of course, is a time-honored trope — and not exclusively a religious one: Han Solo (temporarily) freezing himself in amber in the initial Star Wars trilogy, say, or Neo’s death in "The Matrix," or Black Widow in the latest Avengers movie. It is, however, a trope generally associated with some degree of moral or at least cultural seriousness. Rarely has the heroic sacrifice been manufactured quite so cravenly as in the death of Mr. Peanut: a character with minimal backstory (other than being, according to Planters canon, a World War I veteran, Mr. Peanut has little established history).

Mr. Peanut’s heroic death (and, I prophesy here, his resurrection when the next stage of the marketing cycle needs an injection of viral media content) is among the most spiritually resonant incidents of our modern era (yes, even more than "Cats," the movie), when shared fictional stories in an increasingly absurd shared media landscape are inextricably linked to the branding of products we don’t actually need.

In the absence of shared metaphysical narratives about the world we live in — or even, increasingly, shared cultural properties, as fandom itself becomes more siloed in the wake of #GamerGate-style culture wars and niche marketing tribalization — the only characters that we can be trusted to jointly recognize and severally invest in are the mascots that sell us things.

Just as brands are becoming self-proclaimed moral arbiters — selling us fantasies of feminism and spiritual self-care — so too are they becoming the repository of our storytelling.

Mr. Peanut’s sacrifice can, if not emotionally arrest us, at the very least unite us. As unsettling as the idea that our collective effervescence now revolves around the Twitter veneration of a cartoon character’s specifically virality-tweeting death, we must come to terms with it.