(RNS) — Lots of people see God in nature. But for Tom Steyer, a billionaire environmentalist turned Democratic presidential candidate, the divine is found not only in the environment but also in those who fight to protect it.

“Today I see God’s face in the young people who are demonstrating in the streets to break our reliance on fossil fuels,” Steyer said in a video address sent to progressive religious activists who gathered in Iowa in January. “This is the same God that my family sees when we walk through the woods of our home state of California. We’re reminded of our role in this world.”

Put another way: to Steyer, combating climate change is a spiritual act.

It’s a particular fusion of faith and environmentalism sometimes referred to as “creation care,” a broad theological category that achieved global acclaim after the publication of Pope Francis’ encyclical on the environment in 2015. But the general sentiment was already well-known among earth-conscious religious activists such as Steyer, who have been preaching a spiritual message of environmental concern for years.

According to Steyer, a self-described “political activist running for president,” faith is something he only fully embraced as an adult. Raised by an Episcopalian mother and an “irreligious” Jewish father who helped prosecute the Nuremberg trials after World War II, Steyer found spiritual clarity after a “midlife crisis” that occurred in his early 30s.

“Finding God as an adult … it could’ve had to do with having kids,” he told RNS. “I think it really had to do with, at some level, becoming an adult and taking responsibility for myself. That I needed a framework of meaning in my life.”

His conversion coincided with a “serendipitous” friendship with an Episcopal priest, whose services he started attending with his family. The result ultimately led him to identify not only as a Christian but, specifically, as an Episcopalian.

“I used to mock my mom for being a contradiction in terms: a devout Episcopalian,” he said, laughing.

It was through church that Steyer would eventually encounter California Interfaith Power and Light, an organization dedicated to “mobilizing a religious response to global warming.” In 2013, Steyer, who at the time was rapidly becoming a nationally renowned environmental activist, spoke at the group’s “Energy Oscars.” The event honored environmental achievements and was convened at Grace Cathedral in San Francisco, where Steyer now often attends Sunday evening services and speaks at climate-related events.

“This is, for all of us, a deeply spiritual proposition … a chance for us together to reach for something great,” he reportedly told the crowd, referring to the need to care for the earth.

According to Susan Stephenson, executive director of California Interfaith Power and Light, Steyer’s presence at the gathering wasn’t an accident.

“He has been involved with us over the years,” Stephenson said. “He’s been a strong advocate for the faith movement to protect our climate.” 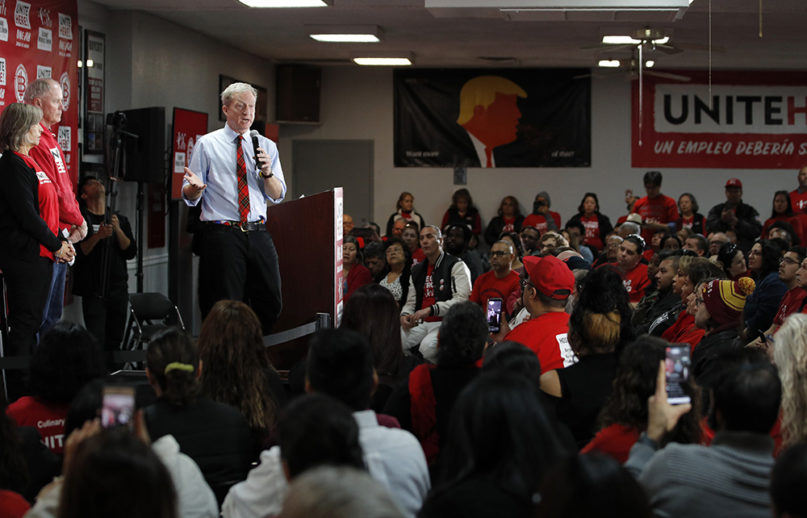 His fervor for religious environmentalism was piqued two years later in 2015, when Pope Francis published his papal encyclical on the environment, “Laudato si.’” Steyer did not hide his affection for the pontiff’s document — “The pope really nailed it,” he told RNS — and quickly set about utilizing the pontiff’s words as a way to put pressure on Democratic candidates running for president.

In June 2015, he issued a statement invoking the pope while praising then-candidate Martin O’Malley, a Catholic and former governor of Maryland, for putting forth a climate change plan that rejected the construction of the Keystone XL pipeline.

“Today, Pope Francis issued a powerful and inspirational encyclical on climate change — and I’m happy to see that many of our leaders are already heeding his call to action,” the statement read. He later added: “This is exactly the type of leadership on climate change the pope, military and business leaders are calling for — and that we need from our next president.”

The statement was widely seen as Steyer, a major Democratic donor, putting O’Malley’s opponents Sen. Bernie Sanders and former Secretary of State Hillary Clinton on notice: follow the pope’s lead on climate, or else.

He took a similar stance during the lead-up to the pontiff’s visit to the United States in September of that year, tweeting out praise for Laudato si’; appearing on MSNBC’s “All In with Chris Hayes” to applaud Americans for “listening to Pope Francis”; and inserting the pope into political advertisements produced by his activist organization, then called NextGen Climate.

He also published an opinion piece focusing on the encyclical in The Hill with liberal activist Sister Simone Campbell, head of the Catholic social justice lobby group Network.

“As people of faith — and as members of the American electorate — we have a profound duty to one another, and to our children, to care for our environment and protect the next generation,” they wrote. “Pope Francis challenges us to look beyond ourselves and act in the interests of our fellow humans, reminding us of our moral obligation to take action on climate to create a cleaner and more prosperous future for the generations who will follow us.”

Fast-forward five years, and now Steyer is the one running for president, rooting his campaign message in an urgent call to take action on climate change. Although he has endured criticism for his past investments in fossil fuels, he has said that, as president, he would declare a state of emergency regarding the environment “on day one”; make addressing climate change his primary foreign policy goal; and call on Congress to pass “something like” the Green New Deal — a sweeping legislative proposal introduced in the House of Representatives and Senate last year by Rep. Alexandria Ocasio-Cortez (D-New York) and Sen. Ed Markey (D-Mass).

And while he maintains a belief in the separation of church and state, his faith has also come up repeatedly on the campaign trail. He visited the church of the Rev. William Barber II in January, and referenced the activist movement co-chaired by the pastor — the Poor People’s Campaign — from the Democratic presidential debate stage that same month.

Many reporters noted that he draws a Jerusalem cross on his hand every day as a symbol to remind himself to “be truthful,” although Steyer is the first to admit he initially didn’t even know the version of the Christian symbol that he drew on his skin had a specific name.

“I’d literally never heard of it,” he told RNS. “I was just drawing a cross and then kept filling it in just to remind myself to be steadfast.”

His earth-focused theology has made appearances as well. He told Good Morning America anchor Paula Faris on her Journeys of Faith podcast that his environmental agenda is emanates from his belief in “protecting God’s earth” and “the most vulnerable people amongst us, who will suffer disproportionately” due to climate change — almost exactly the same words he uses to describe the argument made by Pope Francis in his encyclical.

In addition, Steyer insists that he respects other forms of spiritually infused approaches to environmentalism. He has signed a pledge promising to halt the construction of the Keystone XL and Dakota Access pipelines, both of which were strongly opposed by Indigenous activists who claim that pipeline routes would impact lands they deem sacred.

Steyer said that, were he to be elected, he would take the sacred land claims of Native Americans and other Indigenous groups “super seriously.”

“I have deep respect for native rights,” he said.

The question of whether Steyer’s sometimes spiritual message will convert voters to his cause remains unanswered. He has surprised many by polling well enough to appear on the Democratic debate stage multiple times, and even has placed second or third in recent polls of South Carolina. Steyer has spent millions on campaigning in the Palmetto State, where he has visited churches. However, he has yet to land among the top five candidates in most Iowa polls and continues to trail the pack in national surveys.

Even so, Steyer remains optimistic, yet another trait he credits to his faith.

“I would never be doing this if I didn’t believe in God,” he said. “People think that politics makes people cynical, manipulative and dishonest. I’d say, for me, the exact opposite is true. It made me feel much more intent on being corny, and sincere and spiritual.”

That same religious optimism also informs his belief that, despite all the doomsday predictions regarding the current trajectory of global warming, human beings can help stem the tide. He framed the fight against climate change as giving the United States “a chance to reinvent ourselves as the moral leaders of the world,” a sanguine perspective he said was “totally” informed by his faith.