(RNS) — He was a slave from Senegal who wrote in Arabic. Or was he an Arab prince? He was a scholar who memorized vast passages of the Quran and mastered numerous Islamic texts. Or were his writings unintelligible? He was a devout Muslim. Or did he convert to Christianity?

These are just some of the conflicting narratives about Omar ibn Said (or more correctly Sayyid), a black Muslim scholar captured in Senegal in 1807 and transported by boat to Charleston, South Carolina. He eventually fled to North Carolina and lived out his days as a house slave to James Owen and Owen’s brother, onetime North Carolina Governor John Owen.

Two North Carolina university professors are now editing what may be the first comprehensive transcription and translation of 15 existing documents written by Said in Arabic — including his short autobiography — and in the process hoping to correct the historical record about the mysterious Muslim polymath.

Said has long been a subject of fascination, both in his lifetime and in the 156 years since his death. Last year, the Library of Congress published on its website a digital version of Said’s autobiography, making it widely available and reigniting interest in the writer.

That interest is in no way confined to scholars. Grammy Award winner Rhiannon Giddens, known for exploring African American folk traditions and turning them into ballads, was commissioned to write and perform an opera based on Said’s autobiography. “Omar” will premiere May 22 in Charleston as part of the Spoleto Festival USA.

In recent years, however, scholars have criticized Said’s work, claiming it is filled grammatical mistakes and omissions, especially when he quotes from the Quran. Others have suggested his writing is unreadable.

But on closer inspection, two scholars — one at Duke, the other at the University of North Carolina at Chapel Hill — now say researchers have missed key Arabic sources Said quotes in his writings, as well as his strategy in using those quotations.

The two scholars, speaking last week at the Black Muslim Atlantic Symposium at Duke University, said scholars have underestimated Said’s intellectual and scholarly training and his ability to use that training to compose something that had significant meaning.

Multiple legends have grown up around Said since his death in 1864, said Mbaye Bashir Lo, a professor in the department of Asian and Middle Eastern Studies at Duke University.

In the post-Reconstruction era, many white Americans thought Said must have been an Arabian prince who mistakenly wound up in servitude. A black man of African origin could not possibly read and write in Arabic. A page of Omar ibn Said’s autobiography written in Arabic in 1831. Photo courtesy of LOC

In fact, Lo said, many people in the region now known as Senegal were more literate in the 19th century than the average Western European. Like Said, who probably spoke the Fulani language (he was a member of the Fula ethnic group), people of the region spoke multiple languages. Arabic was the language taught in schools.

In the 1980s, as scholars began to explore Islam’s roots in America, Said once again became widely discussed. Scholars disagree over the number of Muslims brought to the Americas as slaves during the antebellum period, with estimates ranging from 40,000 in the U.S. to 3 million in North and South America. But there’s no question that Islam has been woven through American history from the start.

Like so many Muslim slaves, Said was said to have converted to Christianity. But neither Lo nor Carl Ernst, professor of Islamic studies at the University of North Carolina at Chapel Hill and Lo’s partner on the project, is convinced this actually happened.

If it did, they wonder if the conversion was sincere.

Said was given a Bible in Arabic by his owner, and his writings attest that he knew at least four biblical passages. But he continued to quote from the Quran and other Muslim sources throughout his life and may have been interpreting Christianity through the lens of Islamic theology.

One of Said’s manuscripts at the UNC library is titled “the Lord’s Prayer in Arabic.” But on the back of the paper Said wrote a chapter from the Quran.

“I think it’s overwhelmingly probable that he learned those passages in order to perform them orally at the request of his owners,” Ernst said.

Said’s autobiography, written in 1831, may be the only slave narrative written by a slave still in captivity. In it he describes his journey to Charleston, his escape from the hands of a “wicked” slave owner named Johnson — “a complete infidel who had no fear of God at all” — and his flight to Fayetteville, North Carolina, where he stopped to pray in a church.

After a boy discovered him in the church, he was arrested and taken to a jail. There he picked up a piece of coal and began writing on the cell’s walls in Arabic, instantly drawing the attention of his jailers. James Owen of Bladen County, south of Fayetteville, recognized Said to be an educated man and bought him from his South Carolina owner. He spent his final years in North Carolina. 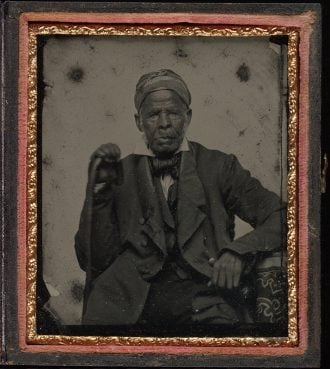 A portrait of Omar ibn Said around the 1850s. Photo courtesy of Yale University Library

In one document — an 1819 two-page letter Said addressed to Owen — the two professors identified five citations Said used that have thus far eluded scholars. Said’s writings are loaded with quotations he wrote down from memory.

With the aid of the internet, as well as older Muslim textbooks from West Africa and the Middle East, the professors found that Said quoted from a 12th-century Andalusian Sufi master and also from a 16th-century Egyptian theological poem.

“I see signs of a writer who is very careful,” Ernst said at the symposium. “Even if he is making some mistakes due to the oral nature of his education, it is unconscionable for arrogant Orientalists to sit there and tell (us) what is wrong with the author of the text when they don’t understand what is in there.”

Ernst and Lo’s critical edition of Said’s writings will be published online in digital form as part of the Islamicate Texts Initiative at the University of Maryland.

Ernst said people’s fascination with Said suggests something about the expectations people still have of American slaves. And that, he said, is what drives him to research him.

“We have to have a way of understanding how someone like him could have lived the life he did,” he said, “surrounded by people who couldn’t understand him at all.”