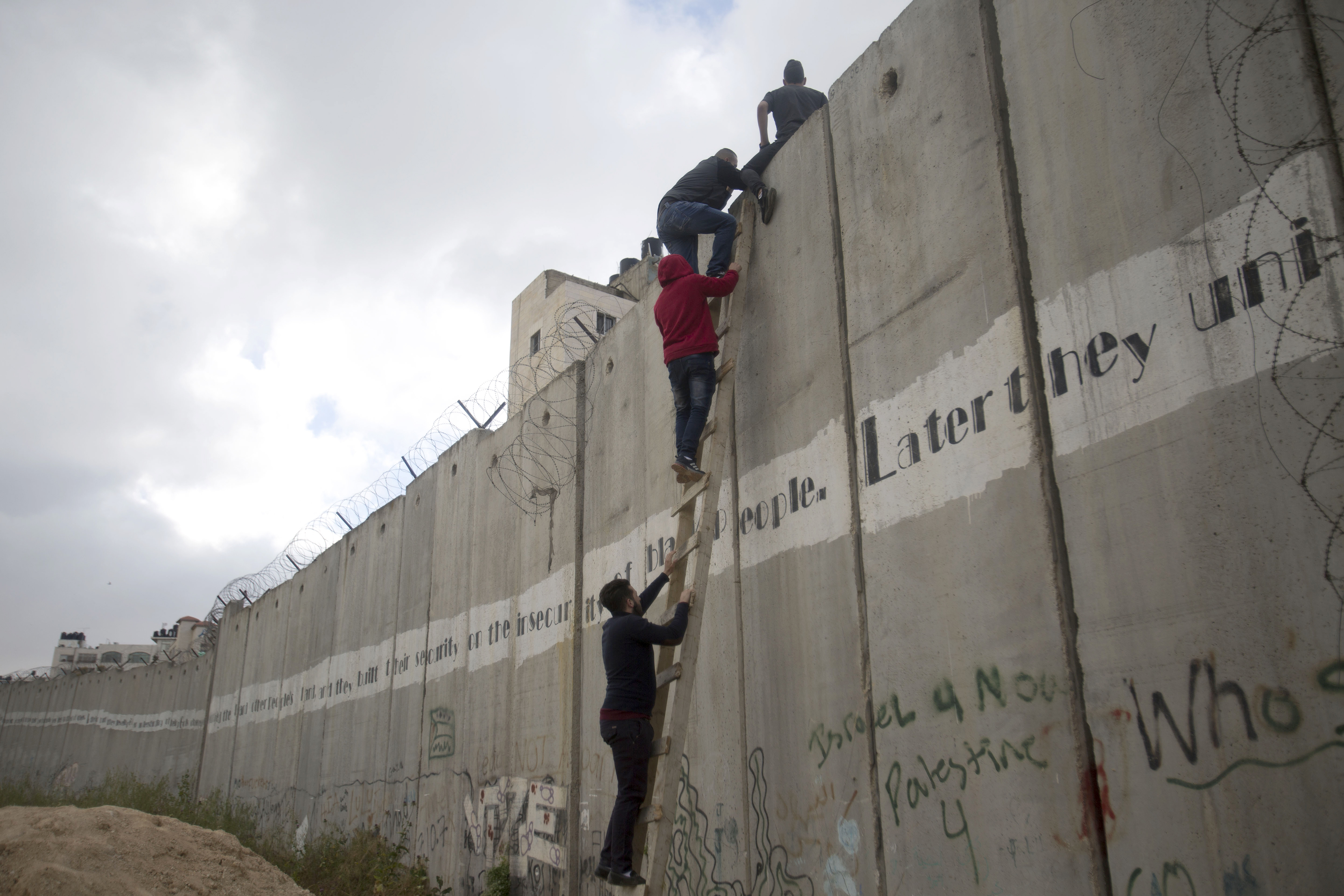 Palestinians climb the Israeli separation barrier on their way to attend the first Friday prayers in Jerusalem's al-Aqsa mosque, during the Muslim holy month of Ramadan, in the village of al Ram, on May 10, 2019. (AP Photo/Majdi Mohammed)
February 12, 2020
Jeffrey Salkin

No problem. I call the A.C. company, and they send over a technician.

Let me introduce you to Omar. When he entered my house, I thought I recognized his accent.

"Where are you from?"

"Me, too!" I responded. (Well, not actually. But, I have been to Israel approximately 50 times and rent an apartment in Jerusalem every summer.)

"Shalom aleichem!" he said to me.

Omar is a Palestinian who lives in Boca Raton (so, I guess you could say that he is assimilating into Jewish life).

He told me his story: born in Jerusalem (which he insists on calling Jerusalem, and not Al-quds, its Arab name). Fled to Gaza. Went to Egypt. Fled Egypt and returned to Gaza. Left Gaza and went back to Jerusalem.

As in east Jerusalem. As in, inside the walls of the Old City.

And so, we played Palestinian-Jewish geography. We compared notes on the city that we both love. Favorite hummus places. Favorite sites. Stories about the shuk, the city's historic market. The usual.

Is there something odd about this story?

There shouldn't be. Because, when all is said and done, as Omar said to me: We are all human beings, and we all want the same things. Prosperity for our families and to get through the day unharmed and even whole.

And yet, such a view is often heretical — for both Palestinians and for Jews.

Several weeks ago, I was the emcee for a showing of an Israeli film, "The Electrifiers," at the Miami Jewish Film Festival. It was a sweet, poignant comedy about a washed-up Israeli rock band — sort of like "This Is Spinal Tap" meets "Exodus."

In my remarks about the movie, I said that a good alternative ending might have been that the Israeli musicians, seeking significance and meaning in their lives, decide to teach music to Israeli Jewish kids, Israeli Arab kids, and Palestinian kids — and start rock bands that would tour that beleaguered land.

After the movie, a woman accosted me. "How dare you say that about the Palestinians?" she said, wagging her finger in my face.

"What did I say?" I asked, astounded by her response.

"That Israeli kids and Palestinian kids should play music together!"

Do such attitudes exist on the other side of the human and psychological barrier? Of course.

But, I cannot control "them." Neither can I control "us." I am just, in the words of the prophet, a prisoner of hope.

He asks me if I would like some coffee. He offers to go out to get some. "What would you like?"

My usual: a grande latte.

"Here," I said, reaching for my wallet. "Let me give you some cash."

"No!" he said, waving off my gesture.

At the end of the day, this is how we make peace.