WASHINGTON (RNS) — Some people looked straight up, watching the lights and shadows crossing Washington National Cathedral’s neo-Gothic arches. Others stared directly ahead, listening intently to meditative world music emanating from a trio playing instruments from across the globe.

A child rocked to the gentle music and a man nodded to the beat as the altar was bathed in a background of purplish fog.

Over three 45-minute immersive sessions, “Space, Light and Sound,” part of the cathedral’s “Seeing Deeper Week” (Feb. 10-14), drew more than 2,000 people of several faiths, as well as the nonreligious and unaffiliated, including many grandchildren and grandparents of both groups.

With the cathedral’s nave emptied of the 1,400 chairs normally arranged in neat rows facing the altar, the crowd sat, stood or stretched out on the floor in the center of the nearly 500-foot-long space.

“A lot of people who would never come here for church come here for this, which is part of the point,” said Kevin Eckstrom, chief communications officer for the Episcopal Diocese of Washington’s cathedral, often the setting for funerals of state and rites for other national figures. After offering the show for free for three years, for the past two the cathedral has charged $10 per person to control the size of the crowds and help defray the cost of the event. 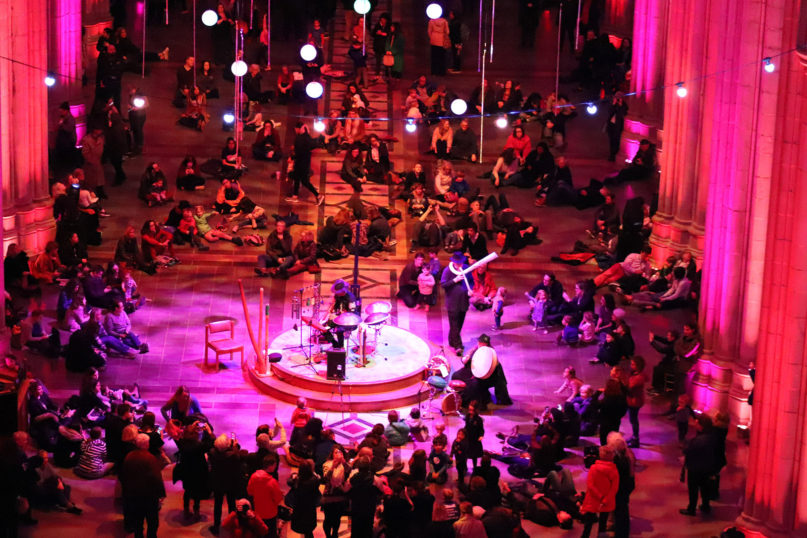 RELATED: In this art gallery, conversations about religion and spirituality are welcome

Nina Goodwine, 33, who describes herself as spiritual but not religious, said she normally wouldn’t darken the door of a cathedral but said that as a fan of art installations she decided to attend the first of the light- and sound-filled events on a rainy Monday night.

“I meditated for, like, two minutes while I was here when the music was playing, so for me there was a spiritual aspect to it,” said Goodwine, who learned about the event on Instagram and traveled half an hour from Takoma Park, Maryland. “I think just being in here, just the scale of everything with the color, it’s a spiritual experience, just looking at it.”

Jaiden Patel, a 9-year-old Hindu boy who attended the second session with his mother and grandmother, described it as the “best 30 bucks spent ever.”

“I thought I was just in a new world,” he marveled.

Michael Wright, an expert on the connections between religion and art, pointed out that, while shows like “Space, Light and Sound” have become a popular draw at cathedrals around the world in recent years, they are part of a millennia-long tradition of artists creating or interacting with religious spaces.

Across the world, cathedrals have welcomed people to see their spaces in a new light — both inside and out. 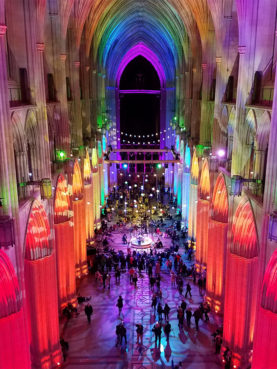 The Washington National Cathedral is illuminated Monday, Feb. 10, 2020, for a “Space, Light and Sound” show as part of the Seeing Deeper Week at the cathedral in Washington. RNS photo by Adelle M. Banks

The exterior of San Fernando Cathedral in San Antonio has been the background for a video art installation that draws tourists. The facade of Notre Dame, the famed Parisian edifice that suffered a devastating fire last year, was lit up in 2017 to commemorate the centennial of World War I. Several English cathedrals, including Gloucester and Guildford, opened 2020 with immersive shows.

“For me it’s exciting to see yet another example of churches waking up to the aesthetic possibilities of their own space and then the general public waking up to the spiritual qualities of art,” said Wright, who earned a master’s degree in theology and the arts from Fuller Theological Seminary. “I see in an experience like these light installations evidence that these worlds are remembering one another and kind of interpenetrating in new ways.”

The shows often highlight the artistry of the buildings themselves. Several evenings a week throughout the year, Notre-Dame Basilica, in Montreal, Canada, presents AURA, an immersive event that lights up its interior and fills it with an original soundtrack.

“We wanted to continue to reveal the richness of our basilica and continue to invite people to see and celebrate its beauty from another angle than the daily visit,” said Claudia Morissette, the basilica’s director. More than 215,000 people attended AURA, produced by Moment Factory, in 2019, compared to an average of 800,000 who visit each year for guided tours. 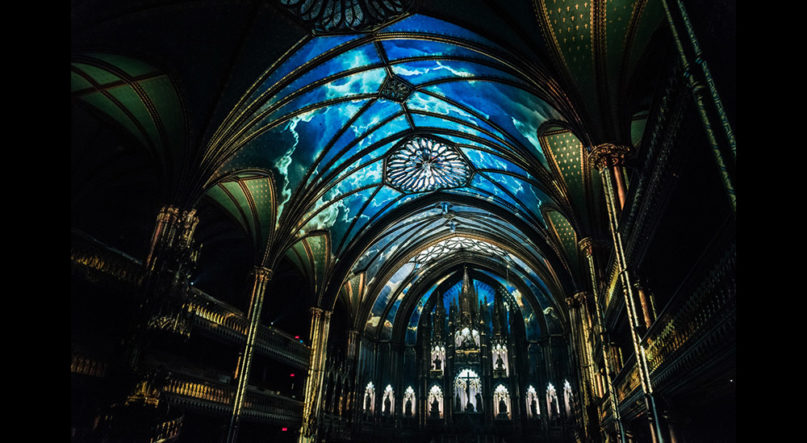 An AURA presentation at Notre-Dame Basilica of Montreal. Photo courtesy of Moment Factory

AURA, which costs 28 Canadian dollars per ticket, like a previous light show at the basilica, “Et la lumière fut” (or “And then there was light”), shows off the artwork and interior décor of the Catholic church as an experience in itself. “We like the idea of being inclusive with this experience in particular,” said Morissette, who said that people view the show in different ways. “I think it is half entertainment and half spiritual experience.”

At Washington National Cathedral, attendees of “Space, Light and Sound” talked about how relaxing the 45 minutes were, a welcome break from traffic, dinner preparations and worries about next activities with their kids. One man who had removed his shoes for the show said he could eschew his anxiety medication that night.

Couples held hands as musicians from Earth Music Effects played drums, along with wind instruments and seedpod rattles that evoked forest sounds like chirping birds and flowing water. A woman enfolded her child in front of her as they listened and watched the lights, which were provided by Atmosphere Lighting.

Diane Pruitt, a Catholic who missed last year’s show because it had sold out, said the mixture of art in the cathedral broadened her appreciation for how such a sacred space could be used.

“I’ve never seen anything quite like this. The combination of the laser show and the music was just unbelievable,” she said. “You’re in the cathedral, but here, it just changes the whole experience.” 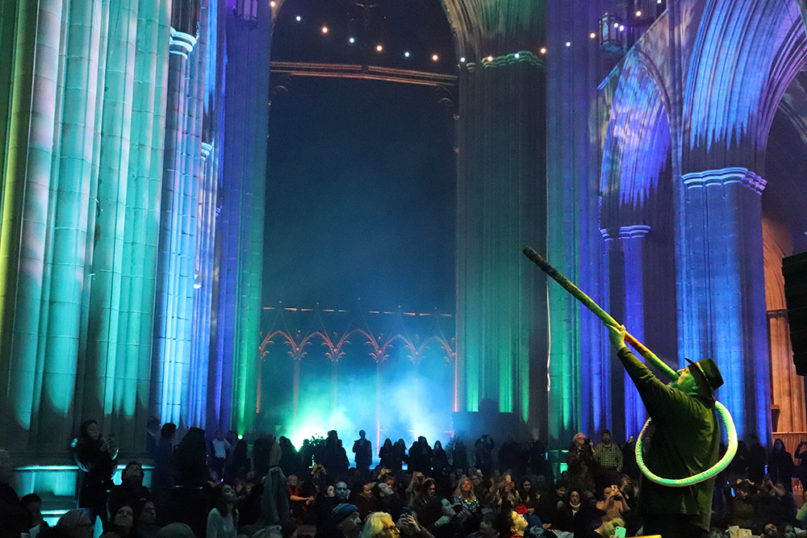 Tim Whittemore, a musician with Earth Music Effects, plays a didgeridoo during the Washington National Cathedral’s “Space, Light and Sound” show, Monday, Feb. 10, 2020, for part of the Seeing Deeper Week at the cathedral in Washington. RNS photo by Adelle M. Banks

Opinion
Fasting may have become a health fad, but religious communities have been doing it for millennia