(RNS) — Many years ago, someone told Yogi Berra that the Lord Mayor of Dublin, Robert Briscoe, was a Jew. His response was classic Yogi: “Only in America!”

Yogi was right. Only in America could it have been true that Joe Lieberman would have run for vice president two decades ago and that two evenings ago two American Jews would be standing at a debate, each one seeking the highest office in our land.

As Rhett Butler said: “Frankly, my dear, I don’t give a damn.”

When it comes to a politician’s faith and whether it should have any bearing on his/her candidacy for public office, I echo Mr. Butler.

But, I didn’t start this conversation. Bernie Sanders did, with his newly released video on how proud he is to be Jewish.

The video starts with a young woman, saying that she can’t wait for Bernie to be the first Jewish president.

Because of the marchers in Charlottesville, who chanted “The Jews will not replace us!” That will really p_____ them off, she reasons — when a Jew “replaces” them at the highest seat of political power in the nation.

That’s enough reason for there to be a Jewish president? To thumb our noses, and lift other digits, at the bigots?

How about: We can finally have a mezuzah on the door of the White House?

How about: We can finally have a Pesach seder at the White House — led by the president?

How about: We can finally have a Hanukkah celebration at the White House (which there already is) — wherein the president can say the blessings over the candles?

How about: We can finally have a Shabbat dinner at the White House?

How about: We can finally have a sukkah in the Rose Garden? Or a Purim party?

But only if the anti-Semitism is of a certain flavor. 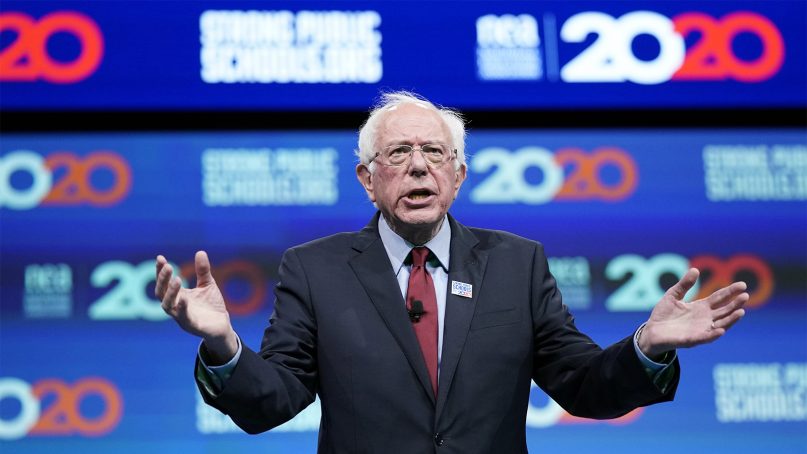 Its view of anti-Semitism is myopic. It focuses exclusively on extreme right-wing anti-Semitism. It reminds us of the anti-Semitic statements that have emerged from the mouth of the president.

It conveniently ignores the anti-Semitism from the left — especially, and tellingly, from Sanders’ supporters and surrogates, like Linda Sarsour and Arab-American comedian Amer Zahr, who willfully erased Israel from the map in Rep. Rashida Tlaib’s office.

Bernie Sanders says that being Jewish is “an essential part of who I am as a human being.”

True: Bernie spent time in Israel on a kibbutz. But, please note: It was the (socialist) kibbutz that mattered — not Israel itself. Its existence as the Jewish State was merely incidental.

True: Bernie allowed Chabad to put up a menorah in Burlington, Vermont, where he served as mayor. But, as the old commercial would put it: You don’t have to be Jewish to do that.

True: Bernie has a son named Levi. But, as far as I can tell, Bernie’s Jewish identity, whatever it is, is infertile. It ends with him. He is a terminal Jew.

I invite you to sigh over this conundrum in American Jewish identity.

Donald Trump has grandchildren who will become b’nai mitzvah.

Bernie Sanders doesn’t — at least, not yet.

Because I have faith in the Jewish future and in the infinite possibility of Jewish growth.

I know many Jews like the Sanders family — people who were once alienated from Judaism, who “got with the program” and are now part of the Jewish community. They are leading great Jewish lives.

And, some of them started on that path when they were older than Bernie Sanders.

Bernie: It is not too late. There is still time for you to fan the flame of that pintele Yid, that spark of Jewishness within you.

Some of you will say: Don’t hold your breath.

But, as a successful Democratic nominee for the presidency once said: I believe in the audacity of hope.