(RNS) — As a pro-life Roman Catholic, I firmly support the teaching of the Church that there is a fundamental right to health care. There is no way to decouple a defense of the dignity of the human person from that person’s right to life or the person’s right to basic and fundamental care. This is especially important for vulnerable human populations who have been unjustly pushed to the margins by those who hold power in a culture.

As a Catholic, then, I find it outrageous that the contemporary pro-life movement does not highlight the fact that, despite our massive wealth, the United States has the worst rate of maternal death in the developed world. Black women are most at risk, being nearly four times as likely to die during pregnancy than white women.

Some of the worst death rates are in states that have chosen not to expand Medicaid under the Affordable Care Act. If we actually stand for what we say we do, pro-lifers ought to be pressuring these states to protect these vulnerable populations at every turn.

Pro-lifers have done particularly good work, however, in fighting so that perhaps the most vulnerable population of all gets health care: babies who survive abortions.

This issue came to the fore when Gov. Ralph Northam of Virginia, himself a former physician, was asked about what should happen to a baby in such a circumstance. His reaction was revealing: He very confidently insisted that the baby would be kept comfortable and “would be resuscitated if that’s what the mother and the family desired, and then a discussion would ensue between the physicians and the mother.” (Even though he was not asked about specific kinds of babies who had survived abortion, a spokesperson later claimed, without evidence, that he was referring to babies with severe abnormalities.)

There are, of course, already laws against the direct killing of a child in such a circumstance. But there are no laws against a doctor and parents deciding that, because the abortion failed and what they wanted was a dead baby, the desired effect should be achieved by failing to give her the basic health care to which all human beings are entitled.

Pro-lifers have been trying to pass legislation to make sure babies who survive abortion get precisely the same care as any other baby born at the same gestational age. In the latest example of the incoherence of U.S. abortion politics, the party of “government staying out of our health care decisions” has been blocked in its attempts to pass the Born Alive Abortion Survivors Protection Act by the party of “health care for everyone.” 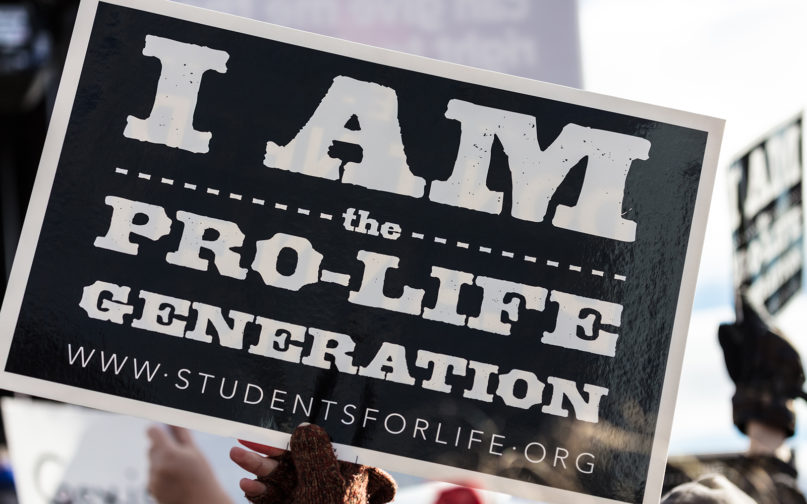 A sign held during the 2017 March for Life in Washington. Photo by James McNellis/Creative Commons

Democrats won’t even let the legislation come up for a vote in the House. And this week (Feb. 25), though three Democratic senators did vote for a bill in their chamber, 41 of their party blocked its passage via filibuster.

How could opponents of the bill explain their shameful rejection of health care for this vulnerable population? It will not do to argue, as critics of the legislation say, that there are very few babies who survive abortion. Outspoken abortion survivors like Melissa Ohden are happy to counter opponents of this legislation who want to erase their existence.

Nor will it do to claim that only a tiny number of abortions are even attempted after the time when a baby can live outside of her mother. It is a small percentage of the monstrous number of abortions overall in the U.S., but the annual number is about the same as the number of people killed in gun violence every year.

And as the group Secular Pro-Life has shown in great detail, most abortions after this time are elective, not, as advocates like Governor Northam would have it, due to medical complications related to the mother or child.

Another revealing irony of this debate is that the typical arguments given in defense of abortion rights — that a mother has the right to do what she wants with her body — are irrelevant. If abortion rights are about the autonomous right of the mother to do what she wants to do with her body, then that debate has nothing to do with the little baby who is fighting for her life in the neonatal intensive care unit.

Refusing to treat a child with this goal in mind is a paradigmatic example of what Pope Francis calls “throwaway culture.” The inhumane unnaturalness of these acts is betrayed by the absurd descriptions they provoke, as when one journalist reporting on this week’s Senate votes referred to it as a “fetus that was born.” In abortion — and, in this case, infanticide — the dehumanizing language makes a child easier to discard. Virtually no one, of course, ever talks about a “born fetus” any more than we talk about “fetus bumps” or “fetus showers.”

Our incoherent abortion discourse has once again demonstrated its unique ability to infect issues adjacent to it. It should be an absolute no brainer for those who believe in a right to health care, and a mother’s bodily autonomy, to join Republicans in making sure all helpless babies get the health care their dignity requires.

Instead, the fog of the abortion wars continues to cloud our moral and political judgments. 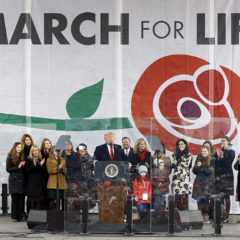 Opinion
The future of the pro-life movement after Trump