(RNS) — For Menaka Kannan, it was bad enough when she heard that a fellow member of New York City’s Baha’i community had contracted the novel coronavirus. But she was not emotionally prepared for the news that came roughly a week later: He had succumbed to the infection and died.

“The news of his passing, of course, is very shocking,” she said.

As the community grappled with the grief, a lingering question arose: How do you conduct a funeral in the midst of a global pandemic, when a healing hug is now seen as a potential death sentence?

It’s a conundrum facing spiritual leaders the world over as the death toll from the coronavirus mounts, leaving the faithful in the U.S., Italy and elsewhere struggling to amend ancient burial practices to abide by government recommendations that advise against gatherings of more than 10 people or, in some cases, ban funerals altogether.

For Kannan and other members of her community’s “burial task force,” preparing for a funeral required balancing a desire to offer spiritual comfort to the grieving with the need to shield others against infection.

Preparations for burial quickly took on complex dimensions. Baha’is often shroud their dead in white cloth strips crafted by volunteers, but to observe social distancing, the traditionally group-oriented activity became a more solitary affair: Only two people were allowed in the city’s Baha’i center at a time to prepare burial materials, and those who participated were required to be 6 feet apart from each other throughout the process.

“It’s unfortunate that we won’t be able to do a proper, well-attended service, but it’s also really heartwarming to see that you can still have a burial,” she said.

Kannan said she was initially concerned about how they would navigate the process with the funeral home but found that it already had systems in place to handle victims of COVID-19.

“They take all the right precautions: They use gloves and masks and whatever they need to and they even will meet you outside to sign a paperwork so that there’s a no-contact handoff,” she said. This March 18, 2020, photo shows a funeral that was affected by new rules put in place due to the coronavirus outbreak in Milwaukee. Wisconsin Gov. Tony Evers restricted gatherings to fewer than 10 people the day before. The coronavirus that has changed everything about our lives has dramatically changed the way we grieve for the dead, too. (AP Photo/Carrie Antlfinger)

Kannan’s community, which numbers only around 1,000 spread across New York City, also leaned on digital tools that members had developed to stay in touch over the past few years. As news of the death spread, her fellow faithful convened Zoom video conference calls to mourn and share spiritual community with each other.

“It was tough, because by the end we had all shared prayers, we were singing songs and it still felt spiritually uplifting, although maybe a little bit less than it would have if we were in the same space,” she said. “There was a moment at the end where we all kind of got really teary-eyed because it was bittersweet. We were recognizing the resilience of our communities to find connection no matter what happens, but we also just miss people, you know?”

Faith groups in other states are attempting to grapple with the issue of funerals by instituting new policies designed to offer some semblance of comfort for the bereaved while keeping others safe from infection.

On Tuesday (March 24), the Massachusetts Council of Churches released guidelines for Christian communities wanting to hold funerals amid the epidemic. The guidelines — which were reviewed by local public health officials — outline a number of recommendations, such as planning funerals remotely, working with the bereaved to make a list of 10 people who could feasibly attend a burial, livestreaming services, cautioning against in-person wakes, using gestures instead of physical hugs and delaying some or all rituals indefinitely.

“We were very clear in these guidelines that pastors acknowledge the pain — not just of the death, but of the grief of the family upset by the prospect of a funeral that is not likely as they imagined,” said the Rev. Laura Everett, MCC’s executive director. “It is a profound act of devotion to a grieving family to stay away — but it’s unbelievably hard.”

Meanwhile, for faith leaders such as the Rev. Mindi Welton-Mitchell, pastor of Queen Anne Baptist Church in Seattle, any funeral is out of the question. State officials recently banned funerals in the region for the foreseeable future, leaving religious leaders scrambling to develop strategies for how to care for the grieving.

No one in Welton-Mitchell’s congregation has died during the pandemic, but she has already had to delay her own mourning process. When her stepfather died in late February, her family buried him quickly and planned a larger memorial service in Alaska for this coming Saturday. But in light of sweeping new measures instituted by the governor — such as a requirement that all visitors to Alaska self-quarantine for 18 days after arriving in state airports — the service has been postponed indefinitely.

“Now we’re grieving a second time — grieving that we can’t gather together like we thought we were going to,” she said. An employee of the San Giuseppe funeral agency closes the mortuary van containing the coffin of Concetta Schifano, a 73-year-old who died with coronavirus, at the Multimedica hospital morgue in Milan on March 21, 2020. The coffin was to be carried to the cemetery of Caravaggio. (AP Photo/Luca Bruno)

Funeral homes have worked to develop policies to protect the health and well-being of others. Randy Anderson, president-elect of the National Funeral Directors Association, said his group has encouraged funeral homes throughout the country to abide by local restrictions on gatherings.

In Alabama, where Anderson runs Radney Funeral Home in Alexander City, this has meant working with faith leaders to limit funerals to 25 people and push them to each stand 6 feet apart, per state guidelines. The funeral home has also limited visitations to 10 people at a time (and then only three minutes with the family) and supplied an option for livestreaming.

“It’s very important to remember the value of a funeral socially, physically — and as religious people that is something that we value,” he said. “Every life is worth remembering.”

In Washington, where funerals are banned, the Co-op Funeral Home of People’s Memorial — which operates out of Welton-Mitchell’s church — has developed more stringent practices. Nora Menkin, executive director of the funeral home, said it is not conducting any services with clergy or family present in order to help prevent infection, and while it offers livestreamed burials, no one has chosen to use it.

Instead, people are opting for virtual mourning outside of traditional services.

“While there are virtual options for services, most folks just don’t seem comfortable or don’t see it as something to give them comfort in the same way as being physically present with people is,” Menkin told Religion News Service in an email. “I am a member of the Jewish community and I have seen Zoom minyans popping up to allow mourners to say kaddish.”

U.S. clergy and spiritual leaders say they are worried that an onslaught of deaths could overrun religious infrastructures. When Everett reviewed funeral guidelines with local public health officials, one expert left an ominous statement on the margins: “Be aware of the potential that there may be an increase in the number and frequency of deaths that exceeds the capacity for pastoral care.”

Everett included the warning in the final draft of the recommendations.

“The church has been here before, so we have practices and models and stories to tell,” she said, pointing to ministers who tended to the sick during past epidemics and during the AIDS crisis. “But one of the things that is so hard is that so many of the stories we fall back on are about drawing close and touching as a sign of love and compassion, and we need to tell different stories right now.”

Anderson said the NFDA is bracing for a potential uptick in deaths as well. The association’s representative has been in “constant contact” with officials at the federal Centers for Disease Control and Prevention and the U.S. Department of Homeland Security since the onset of the novel coronavirus and has long been involved in what Anderson called “mass fatality planning.” 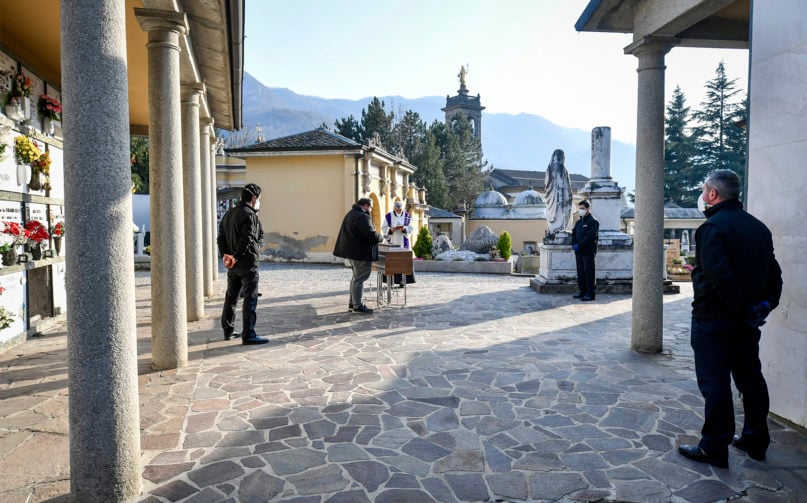 A moment of a funeral service without relatives in the cemetery of Zogno, near Bergamo, northern Italy, on March 21, 2020. (Claudio Furlan/LaPresse via AP)

The nightmare scenario of mass deaths is already part of daily life in Italy, where the novel coronavirus had killed more than 7,500 people as of Wednesday and infected more than 74,000.

Most casualties have been concentrated in the northern sections of Italy such as Bergamo, where Italians watched in horror Saturday as army trucks lined up in the early morning hours to carry the bodies of the hundreds who died due to COVID-19. Adding to the grief: Loved ones would not have a chance to mourn the deceased at a funeral, which are currently banned in the country.

The deaths have put tremendous strain on local funeral homes that can no longer keep up with the high demand, forcing the military to transport bodies to funeral homes in the south.

“Funerals are definitely an aspect that has gone missing,” said the Rev. Tullio Proserpio, a Catholic chaplain at the National Institute for Tumors in Milan, in a phone interview with RNS on Tuesday.

Funerals and weddings were among the first public events to be banned when the Italian government enacted harsh measures throughout the country to prevent the further spread of the coronavirus. Proserpio described the story of a close friend who could not attend the funeral of her relative who died due to the coronavirus.

The priest noted that funerals, especially today, are an opportunity to say goodbye to someone you loved. “But you can’t do it,” he added, “because you risk being legally prosecuted.”

For another priest, the Rev. Francesco Pesce, who lives in the northern Italian town of Treviso, not being able to assist the sick and tend to the dying is among the greatest suffering that the pandemic has brought into the country.

Even so, for Pesce and other faith leaders across the globe, their spiritual obligation to others remains — coronavirus or no.

“I look with admiration to all the priests who have been working hard in these times,” Pesce said. “It begs the question: Am I doing enough?”