The trucks are then driven 80 miles east to the Piedmont Triad International Airport where they are loaded onto the nonprofit’s DC-8 aircraft specially configured to carry up to 84,000 pounds of cargo. From there the goods are airlifted to Poland and then trucked across the border into Ukraine.

This week, Samaritan’s Purse, headed by evangelical leader the Rev. Franklin Graham, made its 30th airlift since Russia began its offensive against Ukraine in February.

The Christian relief organization estimates it has helped 5.5 million Ukrainians with medicine, food and water. Earlier in the conflict, it also operated an emergency field hospital in Lviv, and outpatient clinics across the country treating an estimated 17,758 patients. It now supports 30 medical facilities across the war-ravaged country.

The organization’s 160,000-square-foot warehouse and offices in North Wilkesboro employ 385 people who buy, repair, maintain and retrofit millions of dollars’ worth of medical equipment, generators and water filtration systems, much of them donated. The warehouse has six emergency field hospitals ready to ship, four with tents, hospital beds, anesthesiology equipment, X-ray machines and surgical suites — all engineered to fold into a plane’s fuselage. There are also miles of plastic tarps, mountains of clothing and boxes full of small brown teddy bears with the Samaritan’s Purse logo — a cross inside a circle.

Samaritan’s Purse, now in its 52nd year, has become a powerhouse of faith-based international relief. Ukraine is now drawing on much of that relief, but in any given year, the organization aids people in 110–120 countries. It sent supplies to Pakistan after unprecedented flooding from monsoon rains this past month. It has a mobile medical team at 11 different sites across civil war-torn Yemen. It is helping farmers in Iraq’s Sinjar Mountains plant strawberries.

And then there are multiple U.S.-based recovery efforts. Samaritan’s Purse volunteer teams recently sawed off tree limbs and cleared damaged homes in Kentucky and Missouri where a rash of disastrous floods ruined homes and businesses.

The nonprofit’s mission is based on the parable of the Good Samaritan as told in Luke’s Gospel, in which a man is stripped, beaten and left for dead on the side of the road. He is rescued, not by those with power or authority, but by an outsider — a Samaritan — who bandages his wounds, takes him to an inn and pays the innkeeper to look after him.

To many, Samaritan’s Purse may be best-known for giving shoeboxes full of toys to needy children around the world. But over the past 10 years, it has grown into one of the largest U.S. faith-based nonprofits, with annual revenues last year of $1 billion.

A review of its annual 990 IRS form shows Samaritan’s Purse’s revenue has doubled since 2014, and its assets have quadrupled. It now ranks at No. 23 in the Chronicle of Philanthropy’s 25 largest U.S. charities, a list that includes mostly non-religious charities.’ 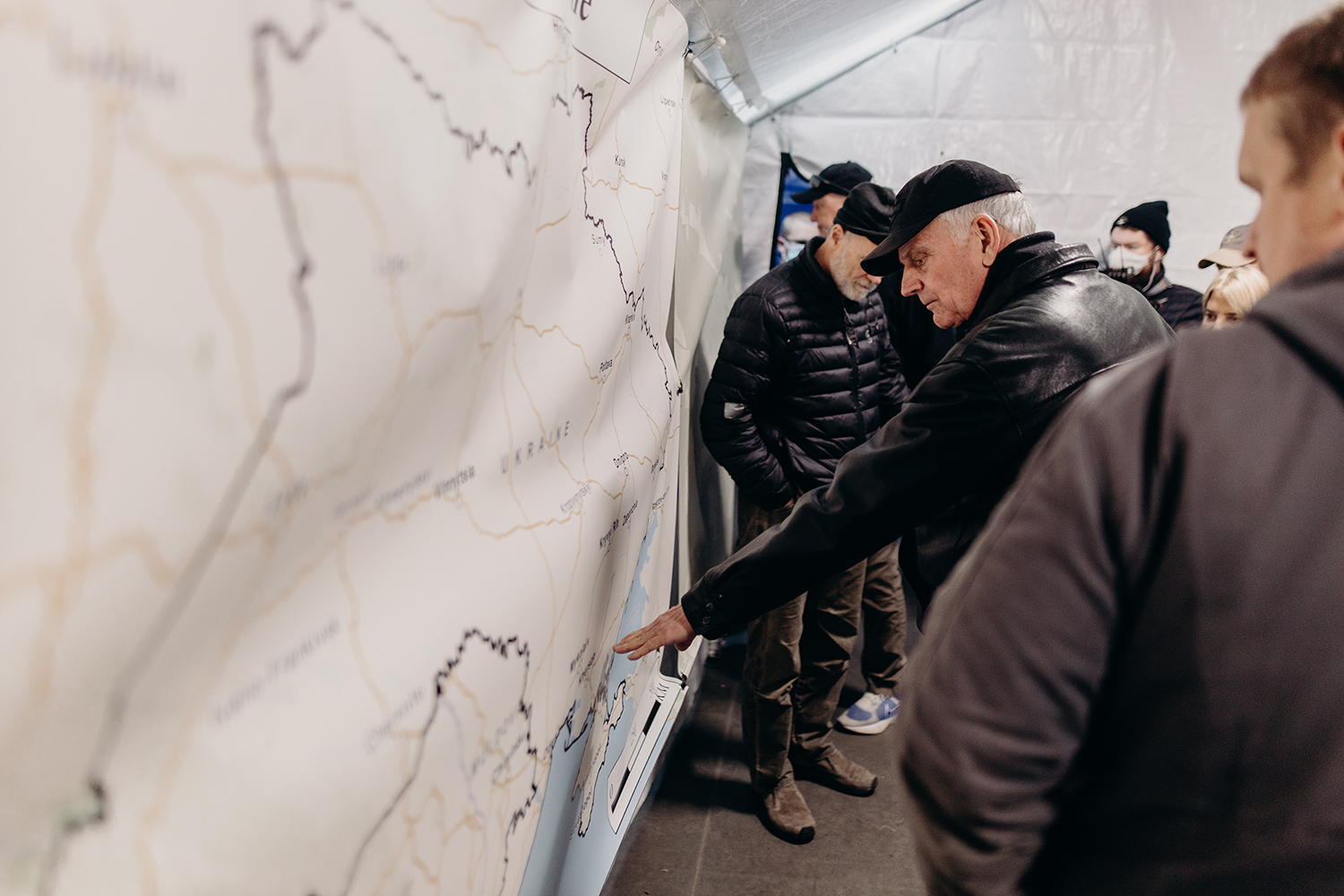 Franklin Graham visits Samaritan’s Purse disaster response specialists and programs on the ground in Ukraine. The international Christian relief organization is aiding families impacted by conflict through the operation of medical facilities and distribution of food and other relief items. Courtesy of Samaritan’s Purse

Today, Samaritan’s Purse is in a league with the American Red Cross, Catholic Charities and Lutheran Services in America. In 2020, it surpassed in cash revenue the Christian charity World Vision, with whom it shares a founder: former missionary and evangelist Bob Pierce, Franklin Graham’s inspiration and mentor.

That growth has come largely on the strength of its frontline work in public health crises and natural disasters around the world.

Even before the COVID-19 pandemic, Samaritan’s Purse designed and assembled emergency field hospitals. In the past two years it put them to use in Italy; the Bahamas; New York City; Los Angeles; Jackson, Mississippi; and Lenoir, North Carolina. Its quick response to emerging health crises was tested in 2014, when two of its medical personnel contracted the deadly Ebola virus while treating people in Liberia. They were evacuated to Atlanta’s Emory University Hospital where they were treated and recovered.

“When we say we run to the fire, that’s not idle talk,” said Ken Isaacs, vice president of programs and government relations and the logistical and regulatory brain behind the group’s sophisticated international enterprise. 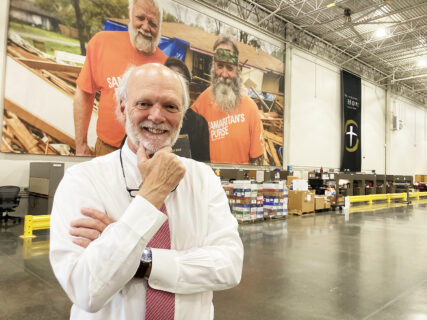 Samaritan’s Purse has built up a corps of Christian doctors, nurses and other medical professionals who volunteer on short-term trips to mission hospitals across the world and a cadre of domestic volunteers trained in debris removal, mud-outs and light construction.

The organization’s headquarters are in North Carolina’s Blue Ridge Mountain town of Boone. It has warehouses in Coppell, Texas, and Fullerton, California, field offices in 17 countries across the world and a lodge in Alaska where it runs marriage seminars for wounded soldiers and law enforcement officers.

But unlike many other Christian charities, Samaritan’s Purse is distinct in a particular way: It has a galvanizing, and sometimes polarizing, leader.

“I think most people today would be hard-pressed to name the president of Catholic Charities, World Vision or Compassion (International),” said David King, director of the Lake Institute on Faith & Giving. “Many organizations are not led by personalities in the same way that Franklin Graham leads Samaritan’s Purse.”

As the son and successor to the Rev. Billy Graham and the president of the Billy Graham Evangelistic Association, Graham, 70, has outsize stature in the evangelical fold. With his 10 million Facebook followers and 2.5 million Twitter followers, he inveighs regularly on some of the hottest issues of the day, drawing as many supporters as detractors for his conservative and partisan views.

He is a staunch supporter of former President Donald Trump; most recently he blasted the FBI for raiding Trump’s Mar-a-Lago home, claiming, falsely, that Trump would return the documents, if asked. A culture warrior on the social issues of the day, whether it’s abortion, same-sex marriage or sexuality, Graham regularly denounces what he sees as a godless America set adrift by secular culture. He applauded the Canadian Freedom Convoy. He labeled Disney a “moral failure” for its gay-friendly policies. He pushed a domestic abuse victim to return to her pastor husband.

But when it comes to running Samaritan’s Purse, he has also proven to be an effective leader committed to helping people in crisis in the most nimble and resourceful ways possible. “Franklin always liked the challenge of getting on the ground fast and cutting through red tape and bureaucracy,” said Mark DeMoss, a now-retired public relations executive who represented Graham. “He wants to go where others can’t go, get set up quicker than others and show (people) you’re on the ground.”

Graham is unconventional in more ways than one. He doesn’t hire outside companies to produce direct mail appeals. He doesn’t socialize with charity professionals.

“We’ve never used outside fundraisers,” Graham said in a telephone interview. “We tell people what we’re doing, and people decide if they want to help us.”

Evangelicals have responded. Graham claims hundreds of thousands of people make small donations of $100 of less, and while that may not be entirely accurate, the charity draws from a large net of donors, many in evangelical circles.

Only 5.1% of Samaritan’s Purse’s revenue in 2021 came from federal dollars. In past years, it has partnered with the U.S. Agency for International Development to provide aid in Iraq, Sudan, Congo, Liberia and Colombia. It also worked with the United Nations’ World Food Program, the United Nations’ High Commissioner for Refugees and the International Organization for Migration, another U.N. organization.

Despite Graham’s social views, Samaritan’s Purse is committed to providing services to everyone regardless of race, ethnicity, religion or sexual orientation. It will, however, tell them about Jesus.

Part of Samaritan’s Purse’s growth and financial success may be due to the Graham brand. Graham inherited from his evangelist father a reputation for personal integrity and financial transparency.

“There was no scandal in Billy’s life, and I think that’s true of Franklin, too,” said Grant Wacker, a historian and the author of “America’s Pastor: Billy Graham and the Shaping of America.” “Whatever one thinks of his politics, he has stayed on track in terms of his personal ethics. What that does is it creates a consistency between the message and the public appeal.”

While some donors may be unaware of Graham’s politics, Wacker said, some give precisely because of it.

“The inclination to contribute is based on trust,” he said. “For evangelicals, both black, white and Latino, personal trust is to a good extent based on a perception of your personal life.” 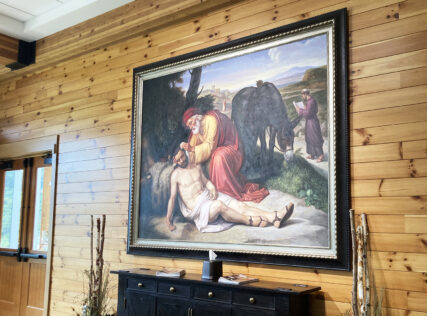 A painting of the Good Samaritan hangs in the office of the Samaritan’s Purse in North Wilkesboro, North Carolina. RNS photo by Yonat Shimron

Then there’s Operation Christmas Child. The longstanding program, begun by Samaritan’s Purse in 1993, partners with local churches, who in turn enlist members to buy small gifts and pack them in shoeboxes for needy children around the world. (It also helped Samaritan’s Purse to be reclassified by the IRS as an association of churches.) Churchgoers’ enthusiasm for the program knows no bounds. Samaritan’s Purse estimates it has 90,000 volunteers each year. In 2021, those volunteers packed and shipped more than 10.5 million shoeboxes worldwide.

But the relationships formed with churches who either donate shoeboxes or receive them for distribution has given the organization global reach and quick access when disaster strikes.

That support has now ramped up with weekly shipments of supplies. The church has opened its building to shelter Ukrainians fleeing the war. Some 430 people slept there one night at the height of the war. Church volunteers use their own cars to go out and evacuate people under siege from the Russians and deliver food and water.

“We are very thankful to Samaritan’s Purse for food, medicine and encouragement,” said Syzonekno. “We are partners. We are doing God’s work together.”

Spiritual Politics
How come evangelical leaders are cool toward Trump?
Follow us on Facebook!
Submit your photos to RNS